Of course, the nightmares have begun.

Nightmare is a harsh term I suppose, but the “anxious dreams” about unrealistic things like forgetting one of my shoes or not being able to actually find the finish line have started.   In theory, there should be absolutely zero pressure on me to finish this 50K.   Being a “fat ass” run, there is no entry fee to lose if I DNF.   No race medal missed out on or an official “DNF” forever written on my Athlinks profile if I don’t cross the finish line.   Being that the course consists of short loops, there is no need to worry about logistics of how to get back to my car if I bow out at any given time.   I haven’t been training for months and months (hahaha) so none of that time would feel “wasted” if I do not finish.   There should be absolutely NO pressure to run all 31.07 miles (and then some, I hear it’s not exact).

But according to my subconscious, there is.

When I first mentioned my intentions of running a 50K on a whim, a blogging friend made a comment that completely resonated within me:

Burn out.  A dreaded term in the training world, and one I know all too well.  Except Heidi was spot on with this comment: I’m NOT burnt out.  Not even close.  In fact I’ve found myself at a point in the roller coaster that is my training world where I’m in LOVE with running again.  Granted, it’s been a forced love due to the hernia, but a love none the less.   I feel strong. I feel good.  I’m EXCITED.  And maybe that’s why secretly, despite absolutely zero pressure to finish…I really want to finish this 50K.

I’ve got six full marathons under my belt,  an obstacle course race that exceeded that distance, and a handful of 20-30 mile random training runs I’ve done on whims because my heart hurt at the time and I felt like running really far.  31 miles is not that far of a stretch for me, like 50 miles would be at this point.  But still…the nerves are there.  Whatever way you spin it, 31 miles is still a ridiculously long way to run.

To ease the unnecessary anxiety, the packing has begun.  (Plus, I’ve got a birthday party, two nights of working gym shifts, and a concert to go to between now and Saturday.  Packing is now or never, it would appear).  Again, this is an unassisted race, and while there will be an aide station, we’ve got to bring our own “aide” to stock the station.  It’s likely all way more than I need, but I’ve got that inner Girl Scout voice saying “always be prepared”. Or something.

It’s been awhile since I’ve written about long distance racing here on the blog, but those of you who have been readers for awhile know that I’ve determined the “running buffet” works best for me. My digestive system can’t handle the typically suggested 100 calories per 45 minutes to an hour, but instead, I’ve found my stomach stays happy and my blood sugar even with a few calories (around 30) every 20 minutes.   Clif Shot blocks, fruit purees, and pretzels are my go to…and easy to break up into smaller calorie portions than a sticky gel.  I’m constantly eating, but it is worth the hassle to avoid an upset stomach that can totally ruin my run.

Just incase, however, I’m packing First Aid Shot Therapy’s Upset Stomach Relief shot.  This product was sent to me recently to test out, and the idea is pretty innovative.  Like an energy shot, but for your gut, the FDA complaint ingredients offer effective stomach relief by combining Calcium Carbonate (think: tums) with peppermint, ginger & a hint of chocolate natural flavorings into an easy to swallow shot.   I took one after gorging myself on Thanksgiving dinner, and was surprised that the taste wasn’t awful, instead it tasted like a slightly chalky peppermint patty. Almost enjoyable.  It immediately settled my stomach, and was something I could imagine being able to toss back during a “my stomach is revolting” moment during a race, as opposed to chewing on some chalky antacids.

F.A.S.T. also offers a pain reliever shot,  which combines Choline Salicylate (a non-steroidal anti-inflammatory drug – NSAID) and Caffeine (about 65 mg) for fast acting pain relief.   According to their website,  studies have shown that liquid pain formats can be absorbed into the bloodstream up to 5 times more quickly than aspirin.   After* the 50K…and once I’m sure I’m well hydrated…I’m going to be needing fast acting pain relief.  (*But not during the run; research shows that NSAIDS taken during long distance endurance events can be tough on the kidneys and may increase the risk of hyponatremia.  Always take pain relievers with caution during these types of events. )

Both products retail for just under $3.00 each, so they are certainly pricier per serving than say, a bottle of tums or ibuprofen, but the convenience factor makes them worth the cost.   Carrying individual pills in ziplock baggies in my nutrition bag during a race usually ends up one of two ways: a) a wet, mushy mess, or b) I lose them.

As far as “other” gear goes, so far I’ve got the following:  warm things, dry things, and tech things. 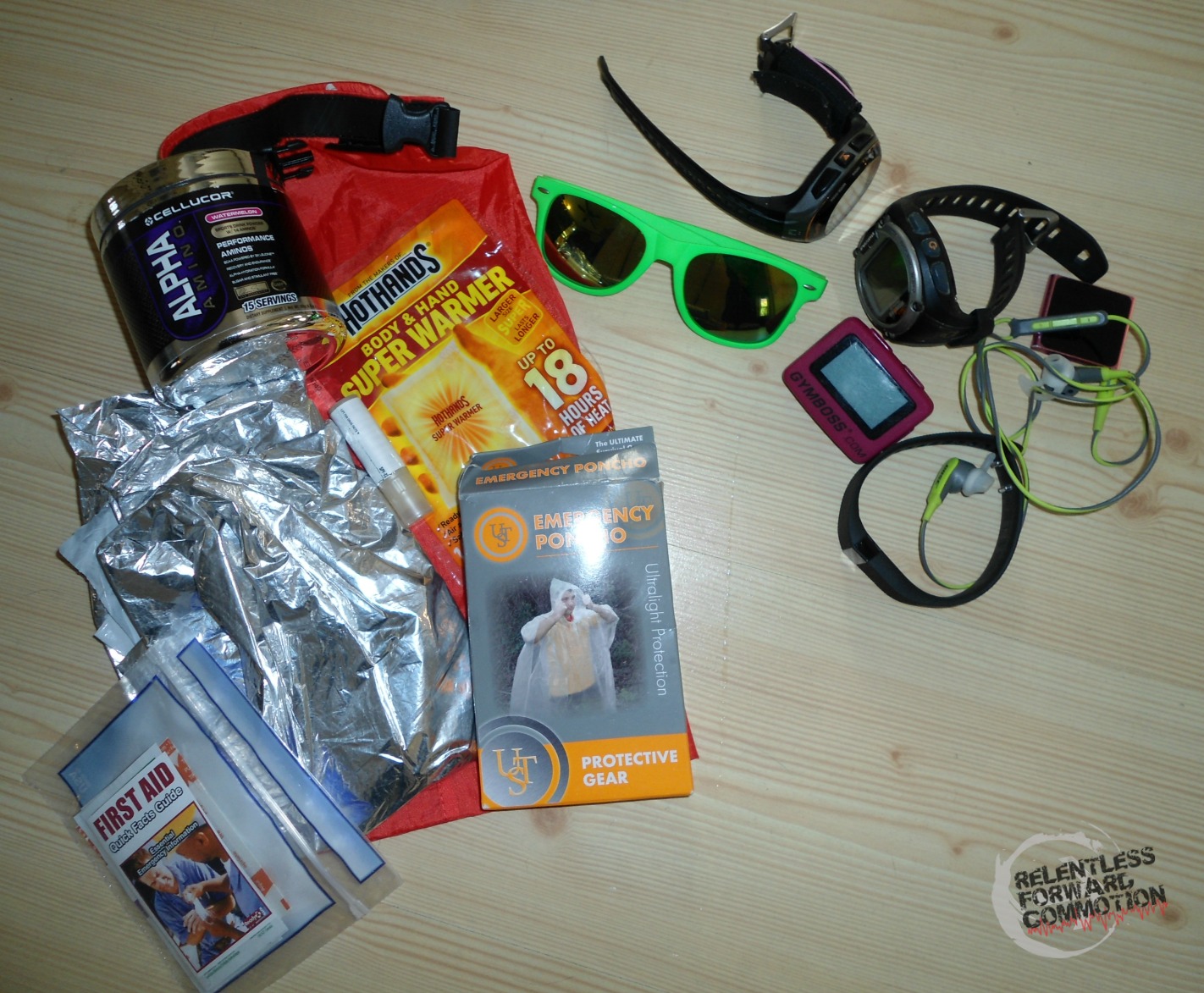 The forecast is currently calling for 40 ish degrees and a 60% chance of rain OR snow.  Which means the sky will likely be dumping some sort of slushy mix all over us.  Hence: poncho, space blanket, and those amazing warming pouches that you aren’t supposed to put directly against your skin, but I do anyway.  Right in the gloves.   Band aids because blisters are inevitable.   Lip balm because breathing into your balaclava (not to be confused with baklava) causes obnoxious chapping.  Some aminos for post race recovery made it into this picture as well.

On the right we’ve got the tech gear, because what running nerd can actually cover 50K without tech? Ok plenty of you, I’m sure, but not me.  I haven’t decided which GPS to wear yet, but I might bring both incase batteries die and it takes me 10 hours to finish (you never know).  My interval timer for run/walk intervals  (though I’m sure their capable, I can’t figure out how to make either of those GPS watches to do intervals).  The Fitbit Charge because 31 miles has to be contributed to team East Coast.  And an ipod because at some point, I’m going to need to shut off the inner voices.

Lastly, cheesy cheap neon green sunglasses, because I’m using the power of wishful thinking to hope the weekend forecast of rain/snow is wrong.

The actual running attire and shoe choices will be decided Friday, when I have a more definitive weather forecast.   And when that massive pile of laundry waiting to be washed is done.

Join the conversation:
Pre race anxiety: how soon does it strike for you?
What is your go-to product for pain or upset stomach relief when you are on the go?

Disclosure: The F.A.S.T. portion of this post was sponsored by Sverve on behalf of First Aid Shot Therapy. All opinions stated are my own.