Monday morning, 11:30 a.m. I paced back and forth in my own house. Laundry was folded, dishes were done, the house in a rare state of clean. Even the kids were busy with “kids only” playtime, according to the toddler in charge. I looked at the time on my phone for what felt like the millionth time that morning. 11:31. Rich was still fast asleep. The night before, baby Kain had put up a protest and was wide awake from 3:30 a.m.-7:30 a.m. It was my turn to be the lucky parent, and I got to sleep. Rich chased the crazy kid around until daylight, and crashed around 8:00 a.m when I awoke to take over the parental duties.

11:35. The debate inside my head was raging. Don’t wake him up. Wake him up. Don’t wake him up, he needs rest too. Wake him up, you need an endorphin fix in the worst way. Don’t wake him you crazy addict. Wake him up, for goodness sake, if you don’t get in a workout before you face the hoards of spring breakers wielding fake ID’s at work tonight you know you’ll have a one way ticket to the psych ward. Don’t wake him up, you s….Heeeey, Rich is up!!! Look kids, Daddy’s awake!!
All of my inner voices let out a collective sigh of relief.
Last week physically knocked me out of the game. The week before mentally knocked me out. My training plan was pretty much shot , I had more than one “where did you and what are you doing” email from coach, and I felt like giving up. Yeah, I said it. In a moment of weakness (more like withdrawal), I questioned my sanity. But as soon as I started feeling back to normal, my sanity returned. You know, the sanity that makes things like a 140.6 mile triathlon seem like a swell idea, and the sanity that wishes I had the guts to attempt a 100 mile ultra like my friend Tara. In other words, the version of sane that others roll their eyes at, haha.
My training plan (being repeated for week #3, since I’ve been so slack) called for a swim. So I packed up my gear, and with the blessing of Rich and the boys (who could care less where I was going, it was lunch time and there was Pirate Booty involved) I headed to the pool.
I was pumped the entire car ride to campus. Rocking out to the music (I love car karaoke!) and envisioning a strong, solid swim workout. I needed this, and it was going to be fantastic! I was practically dancing on cloud nine, when I walked up to the door of the gym and saw the big yellow sign: 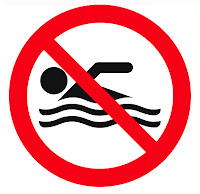 I don’t know why, denial perhaps but I walked inside to confirm with the girl behind the desk that this was true. It was true. There was no hidden exception for my desperate situation. There I stood, at the gym in flip flops and a bathing suit, with no pool to take my non-training frustration out on, and no backup plan. I calmly turned around and headed back to my car, but threw a toddler worthy temper tantrum in my head.

I proceeded to head to Walmart, my planned trip for AFTER my swim, to pick up a few items we needed, such as milk and staples for the staple gun (never a dull moment in my house). I stomped around the store, angry that I started ANOTHER week of training off on the wrong foot, angry that the workout gods seemed out to get me, and angry that I was stomping around walmart in my over sized hoodie, neon green shorts and neon orange flip flops, looking a hot mess. Now, post workout I would have skipped through the aisles, not caring in the slightest about my frightful appearance. Laugh all you want, wal-mart shoppers, I’m training for a triathlon, I’m pretty kick butt. But two weeks without working out has left me feeling awkward, and now I was more self concious than a 7th grader with a massive zit.

I got the necessities, and found my way home. As soon as I stepped in the door Rich took one look at my face and asked what happened. I told him the pool was closed, and launched into a huge shpeal about how I just can’t catch a break. Without skipping a beat Rich said “Baby, go for a run”. Does this man know me or what? When I first started running, I wished that he was was a runner to. I tried to convert him (still occasionally do) to no avail. But as the years have passed, I’ve realized having my partner be 100% supportive of my running is way more important than sharing the passion. I am so grateful.
So I ran. And I ran and I ran. And it sucked, sucked, sucked. It’s amazing how much fitness you can lose in a mere 2 weeks. Last month I was whining about my zone 2 runs being so slow. Now, I was sucking wind and feeling lethargic at an almost 10 minute per mile pace, normally painfully slow for me. I hated just about every second of it, until it was done. 4.5 miles later I sat down on my back deck to stretch, and felt the euphoria that is the runners high start to creep up on me. And just like that, everything was alright in my world once again.

I really think it’s no coincidence that I ran my first race just before having kids. As if God knew I needed this. I know I’d still be a good mom without running. I’d get the job done, no doubt about it. But those endorphins, those miles and that hour alone out there…they just make the job so much easier!

Today I hit the pool a day late. I was dreading it, I’m not going to lie. I haven’t been in the pool in quite sometime. But it went surprisingly well. My body is weak but it’s rested, and so is my mind. I fell into a zone and just swam. 1450 yards, and consecutively swam 300-the length of my first tri. It was a huge confidence booster, one desperately needed. I’m ready for this.
33 days until my very first triathlon. Game ON my friends.

« in the dog house
Coach envy »

Once, I gave up drinking alcohol for forty days. Then I wrote about it, because that's what I do. 60 more days passed, and I found myself 100 days sober. Something I had not once done before in my adult life. I liked how I felt, so another 100 days of no drinking passed. It wasn't easy, of … END_OF_DOCUMENT_TOKEN_TO_BE_REPLACED

About a decade ago, I was a happy road runner, traversing the paved streets of major cities while collecting new half and full marathon finishers medals. I remember thinking that a race had outdone themselves when I'd show up to an aid station, and in addition to water and Gatorade, they had … END_OF_DOCUMENT_TOKEN_TO_BE_REPLACED

When you were little, chances are your mom was always hounding you to "go outside and play". Little did you know, she was doing more than just trying to get you out of her hair - she was helping you stay healthy. As adults, we seek alternate ways to enjoy the outdoors that differ from the … END_OF_DOCUMENT_TOKEN_TO_BE_REPLACED