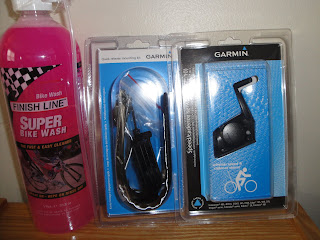 Yesterday the mail lady brought me my Garmin GSC10 cadence sensor and quick release kit, completely free, from amazon.com via swagbucks. (read this post if you missed it to see how. I’m a broke mama, I have to feed my endurance addiction the cheapest way possible!) I was GIDDY. To say making the transition from just runner to triathlete has made me a gear-junkie would be a serious understatement. Especially when it comes to bikes. I swear bicycles have as many optional components as do the cars in “The Fast and the Furious” movies.

Because of time contstraints and well, kids, I have to do a lot of my riding indoors at the moment. And being a dailymile freak, I NEED to know how far I’ve gone. I had been using a crudely rigged wired Schwinn cycle computer, $9 from Walmart, to measure my distance and speed while riding on the trainer indoors. And the funny story is, I proudly installed the darn thing the first time…on the front wheel. For my non cycling/tri friends who weren’t aware, the front wheel doesn’t move when you are on a trainer. So clearly, that did me no good. Instead, I stretched that thing until it barely came to a spoke at the very edge of the back wheel, and made it work. And work well it did, but for those of you as obsessed with your Garmin as I am, well, I kind of wanted all of my stats in one place. (see what I mean? Bike snob in training, jeesh. I’m rolling my own eyes at myself!)
But now, from the awesome powers that be at Garmin, I can know my speed, distance, AND cadence (which I’m pretty sure is still way too slow) on my Garmin, while riding indoors, most likely to the train wreck that is the “Jersey Shore” (prime cycling entertainment!)
So this afternoon, while there was a brief lull in child wrangling, I pulled out the goods and decided to install the bad boys myself. I’m far from a bike mechanic, heck, i still don’t know how to change a flat or what to do if I drop a chain. But, you know, how hard could this really be?
I decide to start with the sensor, so I pulled out all the parts and the directions. That lull in child wrangling I mentioned? Yeah it immediately ended, as toddlers must sense when you have small, important things lying around, and I then had a 1 year old assistant,with fat little hands grabbing things at lightning fast speeds. Thank goodness this doesn’t involve power tools.
Here goes nothing.
“Step 1. Place the GSC 10 on the rear chain stay (on the side opposite of the drive train).”
Umm, pardon? Chain stay? Drive train? Isn’t a drive train a part of a car? You’re speaking a foreign language to me here Garmin, would be it be so hard to include some pictures?
I chased the toddler assistant down the hall and run off to the computer to google images of the completed project. What did people do before the internet? I found what I was looking for, figured it out and things went relatively smoothly from there. Minimal bike grease on my hands, a little bit more on the toddlers, and things light up when they are supposed to light up, signaling I actually did it right. Sweet.
Next, I look everywhere for the directions to make this all show up on the Garmin 305. The C10 manual tells me to see the 305 manual. Really now Garmin, it’s been 3.5 years, you think I still have that? Back to google we go. Did I mention we just moved the computer into another room? Perfect timing! Another trip back up and down the hall, and I figured it out thanks again to the wonderful world wide web. And the best news yet? It works!
Next and far less exciting, I installed the quick release onto the bike and the Garmin itself. I’ve got mixed feelings on the strap. It’s soft and Velcro, which is cool because the regular strap never quite fit my freakishly small wrists quite right. But while the Velcro fits better, it’s HUGE. As if the Garmin isn’t massive enough as it is, now I have a giant strap to go with it! 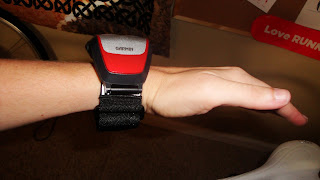 The actual cradle for the bike was a few zip ties and done. Really easy to snap the Garmin in, not so easy to get it out. I’m hoping it just needs to be worked in a little and it will give a bit easier. 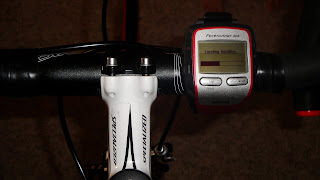 So there you have it, part one of my Garmin GSC10 cadence sensor review. I’ve seen a lot of people in the blog world ask recently about bike computers, so I thought I’d share! Retail price of the GSC 10 is $36.99-$50 depending where you get it (or free if you go the swagbucks route!). Really not too bad for a bike computer, if you already have a Garmin.

I’ll update later to let you know if it does anything weird, like tell me I was easily cruising at 32 mph indoors again, heh heh.

p.s. THANK YOU to everyone who read yesterdays post and voted for me! I appreciate it guys! Keep your fingers crossed, (and please vote if you haven’t already!) this would be a dream come true to win!