Boston. To most of the world, hearing the name of this famous city will elicit thoughts of Red Sox, tea parties, and baked beans. Maybe even green monsters, Samuel Adams (the man and the beer) and lobstah.

But to the running world, Boston is more than just a city. It’s the third Monday of every April. It’s an individual number that we can rattle off in a heart beat (my Boston is a 3:40). A runners mecca that doesn’t start in Hopkinton, it starts long before our names ever touch the entrants lists. To most of us, Boston isn’t just another marathon, it is THE marathon.

Next Monday, April 18th, marks the 114th running of the Boston Marathon, the oldest and many may argue the most prestigious annual run marathon in the world. A marathon with a limited field that one must specifically qualify for, or gain a limited charity entry slot to run. And the Boston Marathon buzz is certainly in the air here in the dailymile community. From tapering to meeting up, travel to weather, all talk this week seems to surround Boston. 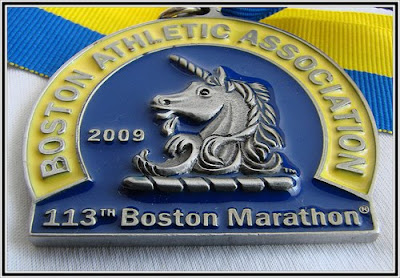 And it is that elusive appeal that has made me vow that I will not toe the starting line of the Boston Marathon until I qualify for it. Please know that I am all for charity running, and salute everyone who does so, but my crazy competitive alter ego will not stand for any other way when it comes to my Boston Marathon. Even if it’s the last state to be crossed off of my 50 marathons quest, I will earn my date with heartbreak hill by running a 3:40 marathon (or 5:30 if it takes me until I’m 80). Because for me, it’s not about crossing another race off of my checklist. It’s not about that awesome unicorn medal (and if you know me and my medal addiction, that’s really saying something). No, it’s not about running the Boston Marathon, it’s all about the journey it took to get there. It’s about proving to myself that I am just as kick ass as that crazy inner competitive ego of mine.

So while I may be slightly jealous of those of you headed to Beantown this weekend, my excitement for all of you outweighs the envy. Right now I can only imagine the thrill of anticipation so many of you are feeling this week. Enjoy every last second of your Boston Marathon experience, and be proud of the journey you took to get there, whatever path you may have taken. Good luck, and congratulations my friends!

And watch out Boston…I’m coming for you…