As an exercise science nerd, the power of the human body fascinates me.  Our bodies are often capable of so much more than we give them credit for, and it intrigues me when someone is able to tap into that power to accomplish amazing feats.   Sub 4 minute miles.  The ability to run hundreds of miles in a single stretch.  Climbing the tallest peaks in the world. The ability to lift 2-3 times your body weight.  But even more amazing to me is the power of the human mind.  The ability to push your mind beyond it’s preconceived limits to achieve such incredibly physical feats. The ability to say “can” when everyone and everything else in the world is saying “can’t”.  The ability to break the physical and emotional barriers set both by genetics and society as a whole.

We all have barriers, every single one of us.  Not enough time.  Not enough money.  Relationship strains.  Parenting commitments.  Physical disabilities or injuries.   Too tall. Too short.  You name it, it seems everyone you meet will have a story to tell you, or sadly in our society, an excuse to give you as to why they “can’t”.

The biggest barrier for me has always been self doubt. 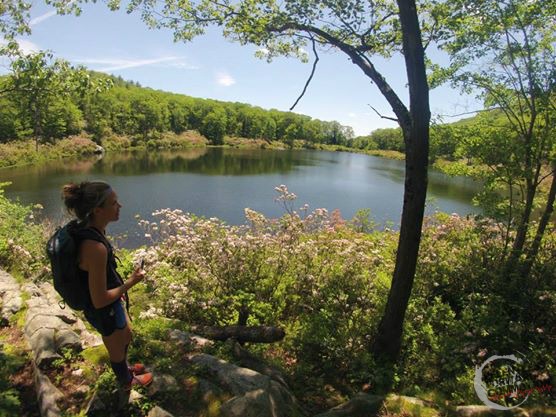 You see, I grew up as a weakling.  A tiny, barely 90lbs soaking wet “stick” if you will, until well into my teenage years.   I remember going to a summer camp where the counselors made fun of me because I physically didn’t have the strength to pull back the string on the bow during archery class, and without the tension my arrow never made it to the target.  I could never do pushups or pullups.    I remember having to do a one rep max on a bench press during college, and barely being able to lift the 45 lb bar.  As I became older, I used the excuse that I “naturally” had a weak upper body, and besides, I was a runner, so I didn’t need that strength.  But in reality, I doubted by ability to ever be able to do these things. so I didn’t try.

Eventually I entered the obstacle racing world, and the self doubt continued.  I didn’t want to make a fool of myself, so I’d pretend to attempt the rope climb, but drop down the second I felt my arms start to shake.  But I was constantly surrounded by inspiring, mentally strong people.  They pushed me to believe that I could be and do more.  During one race,  I decided I was fed up with the self doubt.  Out on the course, I arrived at another rope climb, and despite the fact that my arms were already exhausted, I begun climbing.   I ignored the voices in my head started shouting “YOU CAN’T DO THIS” and kept climbing.  As I grew closer and closer to the top of that rope, arms shaking, the voices got quieter, the self doubt dissipated.  I remember ringing the cowbell hanging at the top of the rope and I triumphantly started yelling “YES!” out loud, cheering myself on.  It sounds silly, but that was such a pivotal moment in my athletic career.   I CAN do it.  I DID it. 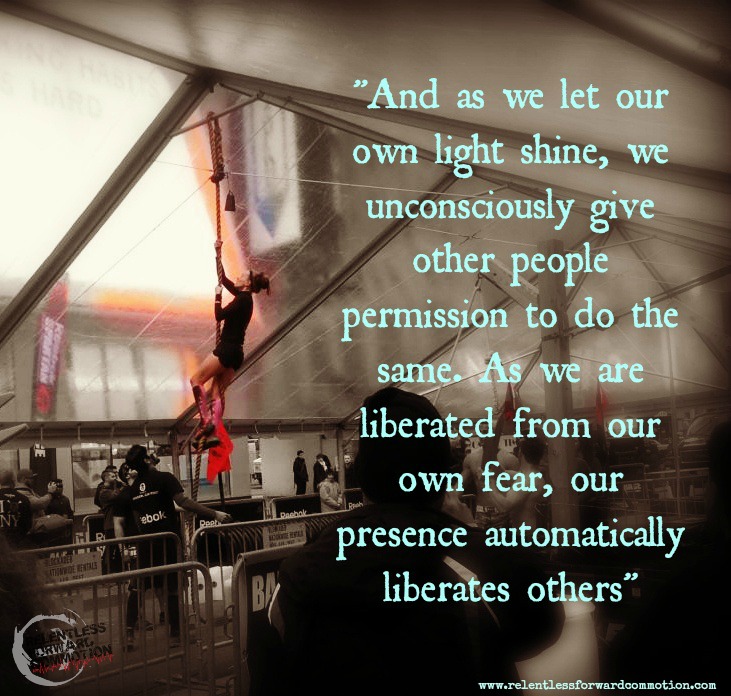 Not the rope climb in the story, but one shortly after.

YES I can strive to be stronger, genetics be damned.  YES I can run faster. Climb higher.  Lift heavier.  Realizing that barriers are only in my way if I let them be has been an eye opening experience not only for my athleticism, but my life as a whole.

After a run up Mt. Monadnock

The other day I said to Geoff that the number one thing I love about the endurance & adventure community is that every time I think I’ve met or heard of the most inspiring, driven, crazy (I mean that in the nicest way) person possible, someone out there will inspire me even more.    People breaking through barriers to accomplish amazing feats, barriers that make my day to day woes seem insignificant.  These people inspire me to push through my own barriers, my own doubts.  Nature Valley recently gave me the opportunity to share with you guys the story of Erik Weihenmayer, the only blind adventurer to climb to the seven highest summits in the world.  Let that settle in for a moment:  think of the last mountain you climbed, multiply that by ten or so (unless you are regularly climbing 20K summits), and subtract your ability to see.  Mind blowing. 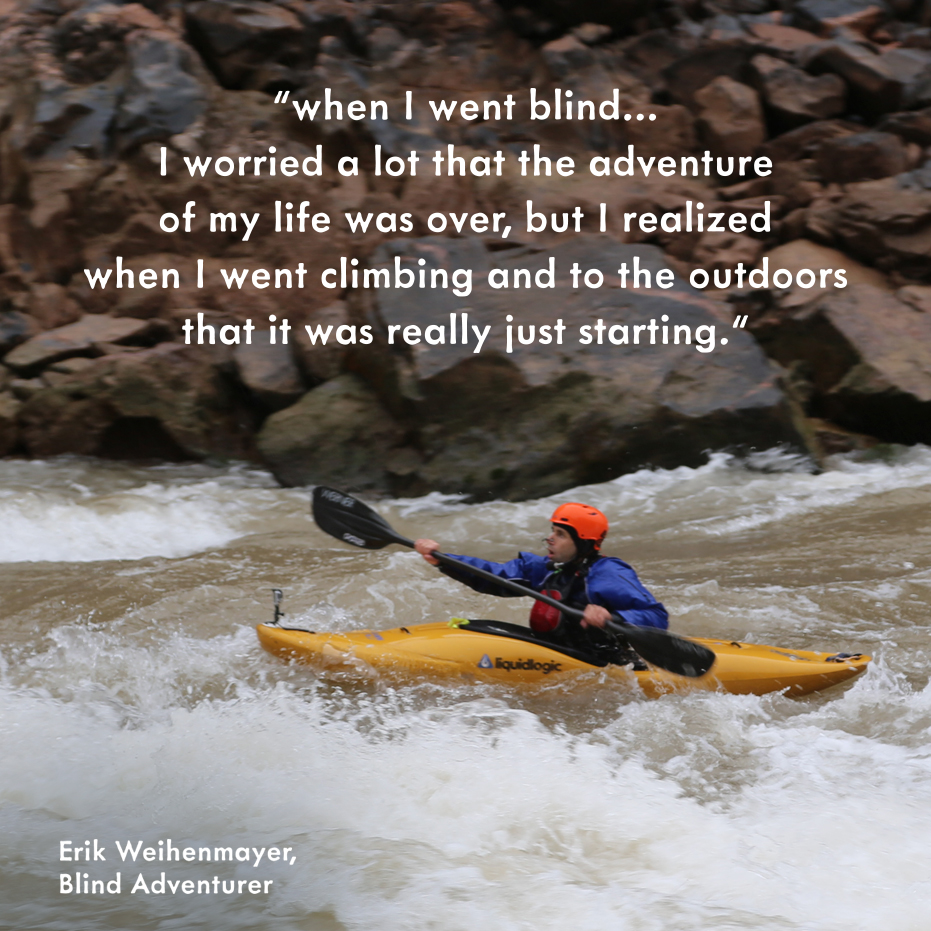 For his current adventure,  Erik, along with fellow blind adventurer, Lonnie Bedwell (accomplished kayaker and Navy veteran ), are attempting to be the first blind adventurers to kayak the Grand Canyon’s Colorado River.    This expedition serves to inspire people to not limit themselves, eliminate barriers in their lives and live life to its fullest.  The trip will begin on September 7 at Lees Ferry, nine miles south of the Arizona-Utah border. Erik and his team expect to complete the expedition on or around September 28 at Pearce Ferry, which marks the boundary between Lake Mead and the Grand Canyon.  (Follow Erik’s journey on Nature Valley’s Tumblr: http://naturevalley.tumblr.com/tagged/nobarriers )

Why are they doing this? Well, not just because it’s a really amazing thing to do, but because they hope to inspire people to not limit themselves, eliminate barriers in their lives and live life to its fullest. Nature Valley is joining Erik Weihenmayer in inviting people to pledge to get out there and live a No Barriers Life. As a founding member of No Barriers USA, Weihenmayer advocates for the organization’s mission to empower people with the message, “what’s within you is stronger than what’s in your way.”


You can join Nature Valley and Weihenmayer in the goal of encouraging one million people to live a No Barriers Life by visiting http://www.nobarriersusa.org/take-the-pledge/ today.

The No Barriers Pledge:

I pledge to view my life as a relentless quest to become my very best self,

To always view the barriers in my life as opportunities to learn,

To find ways to work with others to build teams, serve those in need, and do good in the world,

And to push the boundaries of what people say is possible, for only I know the potential that lies inside of me.

What barriers are you going to break, or have you broken through in the past?  Comment below, or tag me in a tweet!  Be sure to include hashtags #MyAdventure and #GetOUTThere, as well as handles @runfastermommy, @NoBarriersUSA, and @NatureValley!

Sponsored posts fuel more adventures! This one brought to you by Sverve on behalf of Nature Valley.  As always, all writing and opinions are my own.