In March of 2007, I ditched that Nike+ sensor that died in less than a month for a Garmin Forerunner 305. As brand new runner, having just crossed the threshold from “new mommy trying to loose some weight” to “wow, I really like this running stuff”, it was a huge leap of faith on a pricey purchase. But from that very first run with my Garmin, I never, ever second guessed my purchase.
Garmin, shortly thereafter named “Coach Garmin” and I have been through a lot together. From my first age group award at a local 5k, all the way to my first marathon, and all of the training in between. Then came marathon #2, 3, and 4. And lets not forget the day I wore Garmin to work, to see just how far I walked back and forth all day as a waitress at a tiny outdoor cafe (5.41 miles in a 4.5 hour shift). Coach Garmin and I have had our ups (holy cow did I just run a 6:46 first mile of this 5k?) to our downs (quit beeping at me, I KNOW I’m not in the right heart rate zone) and through it all, we’ve been a team.
Until the last few months.
You see, I’ve been wanting a little bit more from my running. Someone to push me, and to tell me exactly what workout to do on what day so that I can finally finish my first triathlon and maybe, just maybe, achieve these Boston Marathon qualifying dreams. So I hired a running/triathlon coach.
And that my friends, is where this fairytale takes a turn. It seems that Coach Garmin is quite jealous of Coach Jeff. I know it sounds silly, but really, I can’t think of any other explanation for recent events. Let me dive into this drama a little further…
Coach Jeff and I had a rough start. Well really, it was all me. Two toddlers, full time course load at school, work, studying, and just life in general got the best of me. I skipped more workouts than I completed. There were a few times when I got on a little bit of a roll, and it always seemed like something happened to Coach Garmin. It wouldn’t upload. The heart rate reading went progressively down as my workout intensity went higher (as much as I’d love to have a heart rate of 38 bmp while spinning my butt off on the bike, I had a feeling Coach Garmin was lying to me). But then, I’d fall off of Coach Jeff’s training plan, and Coach Garmin was back to acting like nothing ever happened.
Well, after two weeks of being completely out of the game, I’m finally back. Back with avengance. I want to reach my goals more than I ever have before, no matter how much work it takes. And as if the timing could be any worse, I think Coach Garmin just broke up with me.

Today’s workout called for a ten mile progressive run. Last night before bed, I programed the workout and charged Coach Garmin until he told me he was complete (oh how you complete me too Coach Garmin!). I spent a long day at school, and coerced my little sister to come babysit so I could squeeze in my run before the sun went down. I was on cloud nine, ready to go when I turned Coach Garmin on and….BEEP BEEP- LOW BATTERY. Huh? How is this possible? I charged you all night Coach Garmin! YOU told ME that you were fully charged! OK OK, thanks to daylight savings time, I realized I had an extra hour to spare of sunlight. I plugged Coach Garmin back in, who told me he was charging again, and left the room.

Coach Garmin refused to accept a charge for a good 30 minutes. I sweet talked him into it. An hour later, I had just enough to run on. We took off, not 30 seconds into the run, Garmin started the back talk. “Oh yeah, well my memory is full. You have to delete your previous workouts if we are going to go anywhere today”. *sigh* Yes Coach, whatever you say. Deleted runs, went on our way. About halfway through the planned workout, I barely, I mean BARELY brush Coach Garmin against my hip and *BEEP BEEP* starting new lap! WHAAAAT? We haven’t even gotten halfway through this 3 mile set! UGGH ! So I spend the remaining 45 minutes of my run guessing, and ignoring Coach Garmins incessant beeps letting me know I’m in the wrong heart rate zone. I know smart ass, you are the one who had to be so touchy today! Stick with the plan!!

And now, we are home. I’ve tried for the past hour to coerce Coach Garmin into a) accepting a charge and b) uploading anywhere-Garmin connect, Dailymile, Garmin Training Center. Nothing, nothing, nada. No device found. Anytime I put him in his little charging pod, he turns on automatically and starts beeping. Low battery! No satellite! I KNOW ALREADY, JEESH! I turn him off, he turns back on. Off, ON! No…off-ON!
So here we are. Coach Garmin knows that I already blew this years running funds on registration fees for marathon #5 and #6, and triathlon #1 and #2, as well as a bunch of other fun runs in between. Oh yeah, and that new road bike that I’d been saving up for for years now. He knows that I can not replace him. I think if he did fear for his place in my heart and knew I’d kick him to the curb for that sharp looking 310XT if I could he wouldn’t be acting up with such resentment and attitude.
So, friends at Garmin Ltd….any suggestions on how to deal with a jealous, ornery Forerunner? I could use any advice you might have. Because I’ve run out of ideas. And he just beeped at me, again.
Thanks a bunch,
Heather
p.s. if he keeps it up, his days are numbered. You hear that?? Next ice bath is YOURS Coach Garmin!!
(nothing says RUNNING MOM like an ice bath full of toys…) 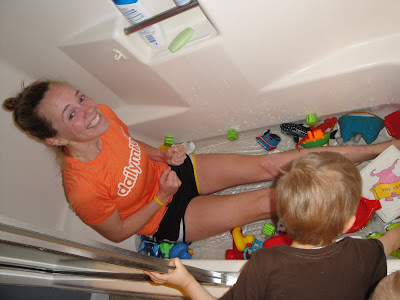