I never imagined when I first started running long distance that the actual act of running would be only half the battle. Besides finding the time to train, I’ve struggled immensely with my nutrition. Granted, I’m guilty in the past of a steady diet of Mt. Dew and Taco Bell, but these days the diet is cleaner and I am still on a mighty quest to please my digestive tract. Or more like, not disrupt it during a long run.

Let’s talk carb loading. To some, it is the act of absolutely gorging yourself on some sort of pasta product the night before a race. To others, it’s a weekly, well calculated process of depleting and then restoring glycogen supplies. I am previously guilty of a well planned dinner at the Olive Garden pre half and full marathon, or a private pasta party with me, myself, and I, in my home before a long training run. And the “guilt” part comes in when I admit that instead of a normal serving of some whole wheat spaghetti and natural tomato sauce, I usually eat the entire platter of say, chicken alfredo (and those endless bread sticks, yuumm)

And, surprise, I found out that wasn’t really working for me (you know, in addition to that “not really training” stuff). Without a doubt, every single long run/marathon I have done over 15 miles, my stomach has flat out protested. Not just the “ooh I don’t feel so hot” protest, more like the “you better find yourself a porta potty in 5, 4, 3, 2…” you get the idea. Last summer, I spent my long runs experimenting with the DURING the run fuel, but one year (and one upper level university sports nutrition class) later, I realize that what I ate during my run, while still very important, was only a small piece of the puzzle.
So in addition to the “during” I’m beginning to analyze the “before”…immediately, weeks out, and overall nutrition in general (last one is the hardest).
Which brings me back to the gluttonous bowl of white pasta smothered in creamy alfredo. It doesn’t work (for me). In fact, even whole wheat pasta with some innocent tomato sauce doesn’t seem to work for me either. I’m beginning to wonder if perhaps the gluten in the pasta is somehow one of the culprits. It’s not that I think I’m gluten intolerant per-se, it’s just an inkling that my stomach in general gets a little cranky when I run for more than 2 hours, and the gluten in my system just irks it even more. I’ve read time and time again that gluten can be hard to digest (this covers wheat, barley, and rye products) Which, would also explain why a pre-long run bagel never seems to work for me either.

So lately, I’ve been fueling this carb craving running machine with rice and quinoa, and lots of it. With a side of beans and veggies. My crock pot has become my best friend. I still eat bread and pasta, just not within the 48 hours before a long run. I could be off my rocker here with the gluten idea, or I may be onto something for my protesting gastro-intestinal tract. But if nothing else, I feel far less bloated than I do after eating pasta. And I hesitate to say it for fear of jinxing myself on tomorrow’s long run…but last week’s 15 miler did not send me running for the nearest bathroom.

And so the search for the marathon before, during, and after diet continues. Until then , I continue to try crazy new things, like clif blok quarters, haha. 8 calories a quarter! 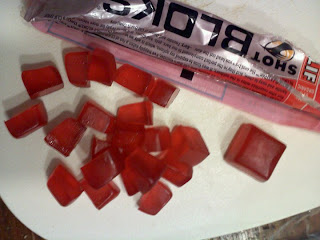 Do you have a tried and true training diet? Or are you just blessed with an easy to please lower intestine? TMI? No such thing in running 😉

Welcome, new friends. I am hoping this Learn to Love to Run program for beginners is the answer to running that you've been searching for. My name is Heather Hart, I am an ACSM certified exercise physiologist and full time running coach. I've worked with countless beginners and experienced … END_OF_DOCUMENT_TOKEN_TO_BE_REPLACED

Take a seat friends: today we're going to discuss the benefits of strength training for runners, and why you need to add some weights, or incorporate body weight resistance exercises, into your training. I can hear the collective groan from the endurance crowd. Listen, I get it. The … END_OF_DOCUMENT_TOKEN_TO_BE_REPLACED

What a time to be alive, am I right? I say that both sarcastically and seriously. I don't know about you, but for the last 15 days my thoughts have continuously fluctuated from calm, to concern, to confusion, to fear, and then back again. I'm in disbelief about the world around us right now, … END_OF_DOCUMENT_TOKEN_TO_BE_REPLACED