Excuse me, but my nerd is showing: 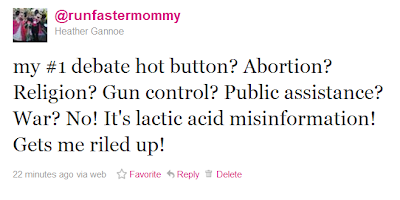 Heather’s cliff notes version, if you don’t want to read the article below (though you should):
-Lactate (lactic acid) is not responsible for your muscle pain post workout.  Microscopic damage/tears as well as inflammation/metabolites/free radicals trying to help heal the damage are what cause the pain.

-Lactate does not need to be worked out via massage, epsom salt bath, exercise the next day, etc, as test after test show that blood lactate levels return to normal within an hour (if not sooner) post exercise, being quickly converted back to pyruvate or glucose (hey, it’s energy for your next run!)

Thanks to my awesome friend/professor/mentor Christine and her former professor Len Kravitz (not the singer) for this great article:

Lactate: Not Guilty as Charged

During intense exercise the development of the “burn” in muscle, referred to as acidosis, has been traditionally explained as an increase in the body’s production of lactic acid. This “lactic acid” cause of acidosis, referred to as “lactic acidosis” is taught in many physiology, biochemistry and exercise physiology courses throughout the world. The cause of the acidosis during intense exercise has been a weighty topic of discussion and debate with fitness professionals and personal trainers for years. Many fitness specialists believe that lactic acid or lactate (See Acidosis Question Box #1 for explanation of difference) production is the cause of muscle fatigue during vigorous exercise. Most recently, Robergs and colleagues (2004) have completed an extensive review of the biochemistry of exercise-induced metabolic acidosis. This expansive reexamination details a much more inclusive and enlightening understanding of lactate production and acidosis. From this recent publication, brief highlights of the history of lactic acid understanding will be presented as well as a more contemporary scientific understanding of acidosis. Some meaningful practical training applications for the applied fitness professional will be offered.

Robergs et al. (2004) identify the discovery of lactic acid in 1789 to Carl Whilhelm Sheele, a Swedish chemist. Sheele isolated an acid in sour milk samples. This milk origin led to the naming of this acid to ‘lactic’, which means relating to milk. Continuing with their historical account, Robergs et al. note that by 1810 chemists had verified the presence of lactic acid in other organic tissues such as fresh milk, meat and blood. In 1833, the actual chemical formula for lactic acid was determined. By 1869, scientists observed different isomers (atomic compounds with different energy states) of lactic acid along with its formation in fermentation reactions. Fermentation is an enzyme-driven chemical change in an organic (has carbon) compound whereby the substance is split into simpler compounds. Since lactic acid is a naturally occurring molecule, originally detected in food products (and with a mild acidic taste), it has and continues to be used to acidify some foods and beverages as well as function as a food preservative. For instance, Robergs et al. note that it is used to help “preserve cucumbers, as an ingredient in brewing and flavoring of beer, an ingredient to make cheese, as a source of calcium (calcium lactate) in baby food, and an ingredient in bread.”

The prevailing understanding regarding lactic acidosis in humans can be attributed to some early researchers of skeletal muscle biochemistry during exercise. Two noted original researchers were Otto Meyerhoff and Archibald V. Hill, who in 1922 both received a Nobel price for their research in the energy capabilities of carbohydrate metabolism in skeletal muscle. Robergs and colleagues (2004) point out that it was Meyerhoff who suggested that lactic acid was a side reaction to glycolysis (splitting of sugar) in the absence of oxygen. They continue that the research of Hill and Meyerhoff solidified the acceptance of lactic acid production and acidosis into the mind-set of academics in physiology and biochemistry, although this was primarily based from their (incomplete) observations of cell metabolism at that time. Robergs states, “…it is easy to comprehend how the Nobel prize quality of work of Hill and Meyerhoff was proof enough to the scientific world at that time for the interpretation that lactate production and acidosis were cause-and-effect.”

It is important to stress that this revealing and interesting history of acidosis and lactate exposes one important message. There really never was experimental research demonstrating a cause-effect relationship between lactate production and acidosis. Yet, the work of these early pioneers has been considered the absolute explanation of acidosis for more than 80 years.

Why is Lactate Still Thought to Cause Acidosis?

Many educators and researchers still consider that lactate production is the cause of acidosis. Robergs and colleagues (2004) explain that most texts simply do not provide and explain the chemically balanced reactions occurring during metabolic acidosis. This incomplete description of acidosis in textbooks has led to the acceptance of the misconceptions of lactate held by many fitness professionals and exercise scientists.

What is the Actual Cause of Acidosis?

During vigorous exercise, the ATP (high-energy compound from which the cells derive energy) demands of muscle contraction are considerable. Every time an ATP molecule is split for energy it is broken down into an ADP and inorganic phosphate molecule, with the release of one hydrogen ion (another name for a hydrogen ion is a proton). It is the increase in protons that defines and causes acidosis, quantified by a decrease in pH below 7.0.

When the ATP demands of exercise are being met by aerobic metabolism (called mitochondrial respiration), the accumulated protons are used in important aspects of cell metabolism. However, during very intense exercise (above steady state or during high-intensity resistance training), an accumulation of protons occurs in the muscle due to a much greater involvement of the phosphagen and glycolytic energy systems providing ATP for the muscle contraction. Robergs et al. (2004) biochemically explain and illustrate (with chemical structure reactions) in their article how the ATP supplied from the phosphagen and glycolygic energy systems is the source of the increased proton accumulation in the cell, and thus THE CAUSE of acidosis (the burn).

What about Lactate Production and the Role of Lactate?

During the demands of high-intensity exercise, the cell is utilizing a lot of glucose (from glycolysis) and muscle glycogen (stored form of glucose). The final step of glucose breakdown results in the production of two molecules of pyruvate. The pyruvate molecules begin to accumulate in the cell, as well as the protons (from the splitting of ATP) from the vigorous exercise. In order to neutralize the soaring accumulation of pyruvate and protons (from the splitting of ATP), each pyruvate molecule absorbs two protons into its structure, converting to lactate. Thus, lactate production is ACTUALLY A CONSEQUENCE of cellular acidosis and NOT the cause of the acidosis. More blatantly, lactate production actually RETARDS ACIDOSIS. Lactate is a temporary ‘neutralizer’ or ‘buffer’ to the cells elevated accumulation of protons during high-intensity exercise. Since increased lactate production coincides with acidosis, lactate measurement is an excellent ‘indirect’ marker for the metabolic condition of the cell.

Lactate production is therefore good and not bad for contracting muscle. Lactate is not a bad molecule, and it has been given a bad rap from being falsely blamed for the cause of acidosis.

What Are The Training Applications from this Acidosis Update?

Personal trainers and fitness professionals can utilize this contemporary understanding of acidosis information for endurance and resistance exercise design. For endurance training, a modern training method is “lactate threshold training”, which is an aerobic training technique that helps to improve the contribution of ATP from mitochondrial respiration, thus decreasing the reliance on glycolysis. This type of training has been thoroughly reported in a past IDEA Personal Trainer magazine article (Dalleck, L.C. & Kravitz, L. (2003). Optimize Endurance Training, Volume 14 Number 1 pp 36-42). (CLICK HERE). For optimizing clients and students doing high-intensity resistance exercise, fitness professionals are encouraged to also incorporate endurance exercise in the training design. This important training addition will eventually lead to a better proton buffering capacity for the exercisers, thus inhibiting a major contributing factor to fatigue when they do their challenging resistance exercise workouts.

Acidosis Question Box #1. What is the Difference in Lactic Acid and Lactate?

Although used interchangeable, lactic acid and lactate are not the same compound. Lactic acid is an acid, which by definition means that it can release a proton for pH conditions < 7.0 Thus, when lactic acid releases a hydrogen ion, the remaining compound (which is negatively charged) joins with a positively charged ion [sodium ion (Na+) or potassium ion (K+)] to form an acid salt (e.g., sodium lactate). Robergs et al. (2004) show through detailed chemical reactions that lactic acid is not produced in the body. Rather, lactate is the product of a side reaction in glycolysis. Acidosis Question Box #2. Why Does High-Intensity Resistance Training Result in Acidosis (the burn)?

During high-intensity resistance training, the body’s more explosive fast-twitch motor units are recruited to overcome the resistance loads. The fuel for this energy demand comes primarily from the anaerobic metabolism (phosphagen and glycolytic energy systems). Fast-twitch muscle fibers have fewer mitochondria (where cell respiration occurs as well as the uptake of protons) than slow-twitch, or aerobic endurance fibers. Thus, during high-intensity resistance training, because of the extensive use of the fast-twitch fibers (with few mitochondria and less uptake of protons) there is a greater accumulation of protons, causing acidosis.