0shares
THANK YOU to everyone for the congratulations after the Umstead post. For the record, it was three races (full, half, full) in three weekends, and NOT three marathons in three weekends. I’m crazy, but not THAT crazy…yet.
I am, however, now a maniac. Maniac #3572 to be exact.

And I’ve made two important observations this week:

In other words, I’m completely exhausted and burnt out, yet all I can think about is “when do I get to do that again?!?!”

All I’ve done fitness wise this week is an hour a day of teaching classes. And I could hardly keep up with, well, myself. My legs couldn’t 8 count as fast as they are used to, and I almost fell over each time I attempted squats. And don’t get me started on the tabata workout in school yesterday, I just wanted to collapse and lay on the floor, haha! It’s the oddest sensation, because physically, I’m really not tired. (Well, not anymore than a mother of two little ones, who wakes up at 5:30 am everyday and goes to school full time is NORMALLY tired, and quite frankly, I’ll take 6 hours of sleep a night any day over what I went through when those nocturnal monsters adorable cherubs were babies, but that’s a different story). And nothing WAS sore (until those tabatas). But my legs, man, they feel like they just won’t work. Like I’ve sat on the couch for the last 365 days straight and just now attempted to use them; like my twig-legs have atrophied to toothpick legs. Now that it’s been a good 5 days post marathon, I’m sure my muscles are stockpiled back up with their share of glycogen, but they are still protesting the last three weeks.

This morning, I stumbled and struggled through a ten miler. Sure, the half a bottle of wine last night didn’t help (I’m officially on spring break, cut me some slack!) but my legs are just TIRED.

But like I said, all I can THINK about is “what’s next, what’s next?!” Yes, I believe the maniac’s insane asylum IS the right place for me. I’ve been pouring over marathonguide.com trying to see what else I can squeeze into 2011. It’s probably a GOOD thing I have kids otherwise I’d run myself into the ground, physically and financially.

I’m officially obsessed, and have resurrected my 50+ states by age 50 quest. And quite frankly, one single star on the Maniacs page is just not enough. I want atleast…3. To start.

But marathoning is being put on hold, because it’s triathlon time. I was chosen to be a part of the most kick butt age group triathlon team in the world, so it’s time to step up to the plate. (they haven’t updated the team page yet, but I swear they let me in)

The UPS man brought me this package the other day: 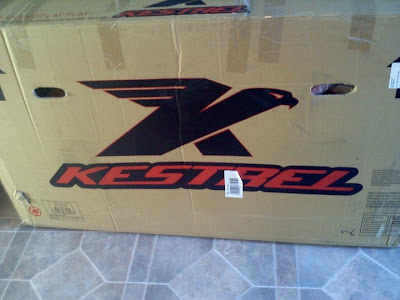 I peeked in the box, but was too scared I’d break something and left it all in there. A beautiful, beautiful, Kestrel Talon Tri. It’s been dropped off at the bike shop, and I’ll be fitted on it Tuesday. I’m excited/terrified all at the same time. Cycling is still so foreign to me. I know nothing of the bike in that box, no idea on the specs, or how to care for it. I’m starting my second season of triathlons, and I still need a crash-course (no pun intended, believe me) in cycling. And now, even while I still don’t know what the heck I’m doing, I’m getting on a faster bike, and going aero. Pretty sure I’m in over my head, but that’s nothing new, I’ll tackle and conquer.

I hope to learn to love cycling. I hope to learn to love the pool. And I better hurry up on both counts, because my next triathlon (third one ever) is 5 weeks from tomorrow…And I suppose this is officially the start of my first 70.3 training. WOAH. It’s always almost surreal when you actually start taking the first steps (quite literally) towards a fulfilling a dream. Scary and exciting all at once.

Facing your fears and conquering them. This is why I love triathlon.

Happy swim, bike, and running my friends, here’s to the next 30 weeks…. http://rev3tri.com/!/southCarolina/index.htm