They say it takes 21 days to form a habit.  This update marks week #4 of training updates, so I suppose they are going to stick around for good.

We officially registered for the 24 hour race, “One Epic Run“. 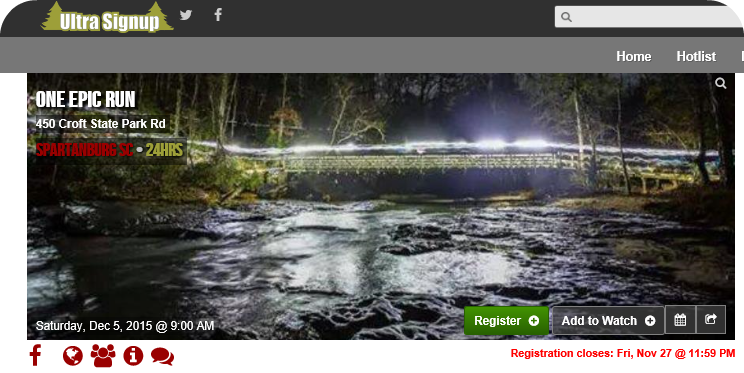 I’ve been slightly over thinking the logistics of the race already.  In the 5 years of the race, not a single female has completed 100 miles in the 24 hours.  In fact, the current female record is 90 miles.  I’ve watched videos of the course, read reviews of the course, and all seem to agree that the 3.1 mile course is not that technical, doesn’t contain any steep parts, etc.  The only time killer I can think of (besides the obvious exhaustion of running for 24 hours) is the fact that ,the 3.1 mile loop course gives you waaaaaay too many opportunities to rest at the/your aide station.  Too many temptations, reasons to sit, and opportunities to quit.

Honestly, I do realize it’s incredibly naïve of me to shoot for my first 100 miler in under 24 hours.

I also absolutely believe in the power of positive…AND negative…thinking.  To sit here and tell myself “well, it’s your first 100 you can’t expect yourself to finish in 24 hours or less” gives me every single excuse NOT to do it.  Though I realize that it is a long shot, and I truly won’t be upset if I don’t hit 100 in 24 hours, from this moment forward I refuse to allow that thought to enter my head.  Because allowing that thought to reside in my consciousness only opens the flood gates for the excuses to begin, and become validated.   “Well, I missed a long training run, but it’s OK, I probably won’t hit 100 miles anyway.” Or, during the race “I’m really tired, I could take another break, because let’s face it, I’m probably not going to hit 100 miles anyway…”  You get the idea.

We decided to switch up our training schedule to run our back to back long runs on Monday & Tuesday instead of the traditional Saturday and Sunday.  Because of our schedules, we have the ability to run during the week, plus this means that weekends with the kids home couldn’t interfere (a.k.a. be used as an excuse, haha) with long runs.

So I mapped out what would be approximately a 16 mile run, and around 5 pm, we headed out.    Turns out, Ocean Boulevard is far busier at 5 pm on a Monday night than it is at 6 am on a Saturday morning, and the tourist traffic was actually kind of terrifying to run in.  So we changed our route a little bit…at which point my GPS died.  I have this problem where I forget to charge my GPS until about 15 minutes before we leave for a run, but use it anyway in hopes that I can outrun the battery.

Point being, I thought I underestimated our run, so I added a little extra stretch.  And turns out we overshot by .83 miles.  Oh well.

For some reason, Geoff REALLY struggled with nutrition and the heat Monday night.  Regardless, we woke up early on Tuesday morning to get in our next long run, scheduled to be 10 miles.  We met a friend at the local trail who is also training for the 24 hour race.

My legs felt like cement blocks, just as they should on day #2.  I took my first tumble on this trail (since we moved here), in one of those hilarious 12 foot falls.  I tripped, and tried for nearly 12 feet to catch myself, before finally caving in and falling.

But despite the fall and the cement legs, I felt strong.  Mentally, I was able to push through the discomfort and power on.  Maybe I will get used to these back to backs after all.  Geoff, on the other hand, was really struggling and hadn’t recovered from whatever was ailing him the night before.   He called it quits after 5 miles.  I headed out for the last 2 miles of the trail, but then called it quits at the end of the full loop to take him home.

Pleasantly surprised at how little my legs hurt.  15 minute walk on the treadmill followed by 30 minutes of foam rolling, stretching, and all of those hip mobility things that I hate to do.

With the Black Dog Running Company group. Tempo pace, hovered between 8:00-8:30/mile, with the last half mile at a 7:00-7:16/mile pace.   Then I shared some Clif Builders Bars post run love.

An early morning trail loop. The temperature, for once, felt cool and fantastic.  I felt fantastic.  Took it nice and easy, and chatted Kristin from the running group’s ear off for the entire 7 miles. (Thanks again Kristin!)

Saturday and Sunday inadvertently became rest days. Geoff was given an opportunity to run a 12K trail race about an hour and a half away, so the boys and I all took a field trip down to Awendaw SC for the Francis Marion Dirt Dash.

A video posted by Heather Gannoe (@relentlessforwardcommotion) on Aug 29, 2015 at 4:18am PDT

Sunday my attention was solely given to these two little men.  Well worth the skipped run. (But now you can see why long run days have been moved.)

Slightly shy of the weekly goal, but I’m alright with it.  I’ve got a lot more to talk about regarding nutrition, long runs, and relationships…so stay tuned for the next post.   I’d love to give you a better conclusion to this post than that, but I’m quite literally falling asleep on the couch as I write this. At 2:15 pm on a Tuesday.

One solid month in the books, only three more months to go…