0shares
After a tweet from a fellow Team Fighter today, I had the stark realization that, oh crap, Irongirl is in 9.5 weeks.

But that simple realization was not what caused my panic attack yesterday afternoon. Heck we all know I am not able to follow training plans (a bad habit I’m slowly trying to break) and so winging a race is nothing new to me (believe me, I’m not bragging). No the panic started when I visited the Irongirl Columbia website and discovered that..wait for it….what I thought was a 750 yard swim….is actually a 0.62 mile swim. That’s 1091.2 yards (thanks coolrunning.com distance calculator). Not understanding my fear yet? The furthest I’ve ever swam consecutively was the 300 yards (in a pool, and I struggled) I did in April for my very first triathlon….which would also basically be the last time I’ve swum laps.

After the initial freak out, a panicked call to my older sister’s voicemail, and a “what am I going to do” post on dailymile….I started to calm down. There’s only one thing I can do at this point. Back out is not one of them. The only cause for a DNS (did not start) in my book are broken and torn appendages. And here’s hoping none of that applies come August. The only thing I can do now is swim like my life depends on it for the next 9.5 weeks. 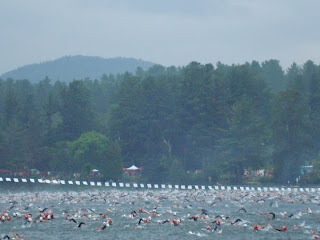 Oddly enough, the whole idea of open water doesn’t really intimidate me, despite the fact that I included it in my freak out equation above. I grew up swimming in rivers and lakes, then later moved out here to SC only to spend 5 hours of every single day April-November in the Atlantic Ocean on a surfboard (pre kids, clearly). I’m very used to being tossed into the whitewash, holding my breath, not knowing which way was up, and waiting for the waves to spit me out. I once heard another surfer compare this to being in a washing machine, and I couldn’t agree more. There is no fear for me of not being able to see the bottom (you can’t even see your toes in 3 feet of Myrtle Beach ocean water). There is no fear of “what’s lurking below”…unless you toss me in the local waterway…I’m not messing with any alligators. Sharks? We’re cool. Alligators? No thank you. Fortunately, I don’t believe there are any gators in Maryland so I’m safe in that pond in Columbia.

The biggest fear I have is not being able to swim 1,091 yards consecutively. Surfing does not equal endurance swimming. You almost always have a very buoyant board strapped to your ankle at all times (did you know beach patrol will yell at you for not having a leash?) so when you fall off, you reach for the board, hop back on, and voila. Paddling is great for your arms, but you don’t have to worry about keeping your head above water. Swimming doesn’t come easily to me, and that’s incredibly intimidating. Yes, I still struggle when I push myself hard on a run, I struggle when I push myself hard on a bike, but at least I know I’m doing it correctly. I feel so awkward in the pool, no matter how much I practice, it never feels natural. It won’t cause me to give up, but it still intimidates me.

But, if I remember correctly, back in February, 50 yards consecutively terrified me. It was all I could do to swim one length (25 yards) of the pool. In two months, I worked my way up to 300 yards, a distance that I had deemed near impossible on that first day in the pool. I did it. So why the fear of 1,091? It’s just another number. Just like 800’s or a 5k or half marathon. Just another number, another goal to work towards. I’ll never let myself be a person who is afraid to push their limits.

Yes it appears that it no longer matters that I can’t run for the next 3 weeks, because I need to get my butt back in the pool and grow some gills, STAT.

Funny how everything happens for a reason, right?

Happy running my friends! Get in a few miles for me….I’ll be in the pool!