“Why bother making a training plan? You never follow those things anyway.”

It was Sunday morning, and Jen, Geoff, and I were standing at the trail head after a particularly sweaty, humid, and slightly hungover run, not wanting to go back out for any more miles, but not yet ready to get back to the responsibilities of real life.  After having recently and very publicly sharing my post-race blues with the world, combined with that mornings reminiscing of TransRockies with Geoff and Jen,  I suddenly felt ready to hone in my focus on the next big race: One Epic Run.

I randomly declared that I was ready to write out a training plan, knowing that December will be here before we know it.  That’s when Geoff questioned my methods.  Please know that this statement is not to be confused with him doubting my capabilities.  He knows what I’m capable of, he’s seen my athleticism and determination in action…he’s just also seen me treat training plans like a fancy wall decoration, rather than a calendar taped up to be dutifully followed.  Without fail, I fall off of the “plan” and end up doing whatever I want, which is typically “just run a lot”. 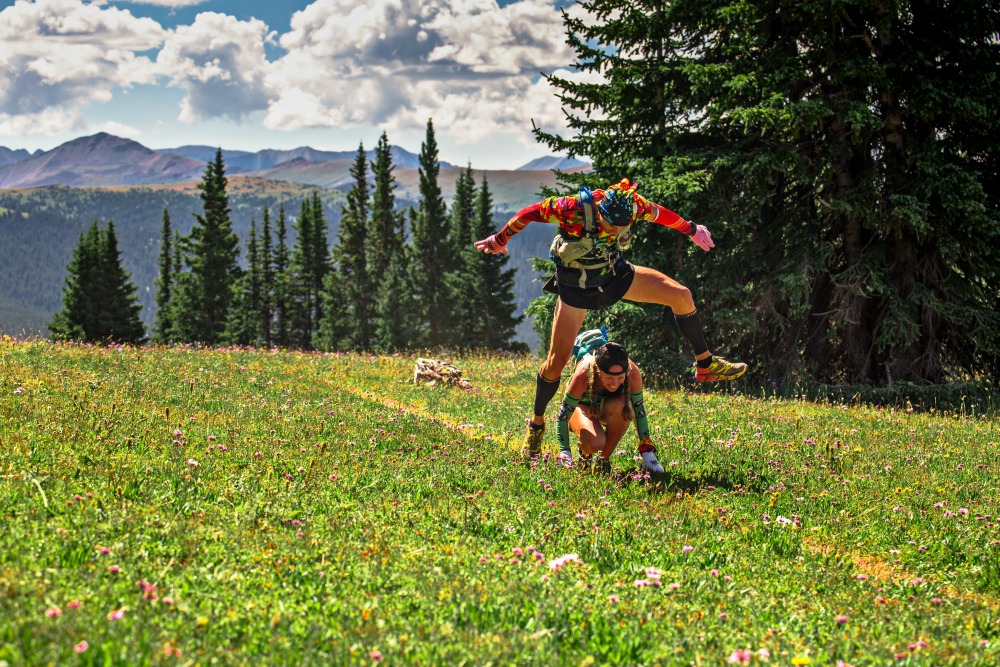 See? He puts up with my shenanigans.

I’ve learned a lot in my first full year pursuing ultra marathon distance races.   I’ve learned that potato chips make amazing race fuel, that the condition and happiness of your feet can make or break your race,  that nothing snarky said by your racing partner should be taken seriously after 6 hours on your feet…

… and that one hundred miles is a really, ridiculously far distance to run.

In hindsight, I realize how foolish my first few “I’m going to run 100 miles on sheer willpower alone, first (second) try!” (See: Infinitus, 2015 One Epic, etc.) statements were. A classic ultra rookie mistake, I’m sure.   Over the years I’ve learned the meaning behind the saying “respect the distance”, and I feel that as a whole, I do.  But how does one respect a race distance that they still can’t wrap their mind around?

I don’t have the answer to that.

But I will never forget the hilarious moment last spring when Geoff and I finished our first 100K, where I instantly went from a feeling of pride regarding our accomplishment, to the realization that I’d have to run another 38 miles from that point to reach 100 miles.  I’d describe that as an “oh sh*t” moment…and the moment when I first came the closest to maybe comprehending how far 100 miles of running truly is.

As I told Geoff when he argued my training plan idea, the more I run ridiculous distances, the more I truly begin to believe that I am quite capable of continuing to run ridiculous distances.  I don’t dare say they become easy, there is absolutely nothing about ultras that I would consider easy.  But they become…less difficult, in a tiny way, both mentally and physically.  And when they become a little less difficult, in turn that causes me to want to try harder next time.

Or in this case, train with purpose.

I’ve truly enjoyed the journey that the ultra world has given me, and despite my failure to reach 100 miles the first handful of attempts, I’ve sincerely appreciated all of the lessons I’ve learned along the way.   So much so that I have zero expectations of running 100 miles at One Epic this year.  Instead, I simply hope to push myself further than I ever have before (which is currently 62 ish miles).   And I’d like to make a legitimate, thought out training plan to get me there.

1) Strength train regularly.  We sort of fell off of the ST train back in August when we were getting ready to leave for Colorado. It happens.  But regular strength training has taken my running to a whole new level.  And in my humble opinion, if you are NOT strength training, you are doing yourself a massive disservice not only as a runner, but as a human being.  (I’m kind of an opinionated jerk, I know).

2) Quality over quantity.   Let me preface this statement with the fact that I am indeed a “newbie” in the world of ultra marathoning, so everything I’m doing is sort of a well calculated crapshoot.  That said, there seems to be this belief, and I suppose rightfully so, that in order to train for a 100 miler, you need to maintain an incredibly high weekly volume.   Well, the truth is, not everyone’s body is designed to handle super high mileage all of the time.  I’ve found that my body’s current “happy zone” is between 50 & 60 miles per week.    So instead of being concerned with putting out a specific number of miles per week, I want to focus on the quality of those runs.

Each week will include a few recovery/easy runs, a threshold (aka this borderline sucks) run, and some speed and hill work.  (And by hill I mean “bridge” because this is Myrtle Beach.)  And lastly

3) Back to back long runs.   I started practicing back to back long runs around this time last year, and they have helped me make HUGE improvements in my mental game, if nothing else.  Knowing how to push through the “my legs feel like they are being held down by cement blocks” feeling is incredibly valuable in the ultra world, because chances are at some point your legs are going to feel exactly like they are being held down by cement blocks.  Back to back runs have taught me to compartmentalize the “here and now”, and not thing about the total weekend mileage as a whole.  Again, a huge benefit when you are only 14 miles into a 100 miler and think “how in the hell am I supposed to run another 86 miles?”  (Answer: you don’t think about it. )

The point with all three of these aspects of my training is that I don’t want to focus specifically on mileage.  Why? Because it’s not always a deal breaker.  Further, for me, focusing on specific mileage often becomes a chore.  You know that feeling: you were supposed to run 8 miles but you only got 5, now you’ve lost a tiny bit of your training mojo.  Repeat two or three times over the next two weeks, because you are having an off or overly busy week, and you think to yourself “why am I even bothering with a training schedule anymore?”.  Next thing you know, you are totally winging it.

Some of you know exactly what I’m talking about.

Instead, I want to focus on types of workouts (i.e: today is Tuesday.  Tuesday is threshold day.  Push slightly out of the comfort zone.   This is not to say that mileage is completely thrown out the window…let’s remember that 100 miles is a really freaking long way to go.  I will have general outlines for the weeks of a goal range, building and cutting back with some sort of periodization.    If I a) complete at least 5 of my training days per week, b) complete them with the intensity prescribed, and c) fall somewhere within the mileage range, then I’ll consider that week a win.

Will this approach work?  Your guess is as good as mine.  But I’m pretty excited to give it a try.

Other things I want to focus on during this (very brief) training cycle:

Race nutrition.  My blood sugar levels are my kryptonite.  This has been the case since I was a very little girl, hence the reason my mother gifted me this sign for Christmas: 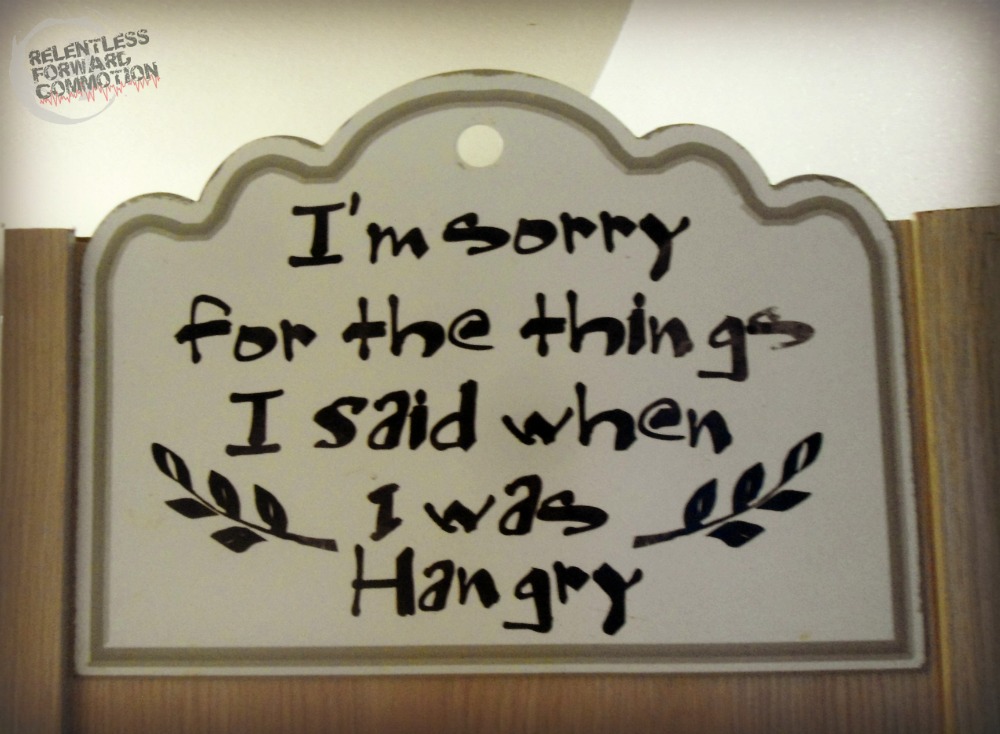 For the record, I’m bringing that sign to hang on our tent, so my crew knows to ignore any potential bitchiness and instead shove some food down my throat.

Anyway, Tailwind seemed to work incredibly well for me in the 100K, so I’m going to start training with that again, and see how it goes.   And of course…potato chips.

So, hey. I haven’t published a blog post all week, so I’m going to go ahead and hit the blue button now.  It’s Friday. I’ve got a case of the Fridays.   More on this topic soon…