This morning after I dropped the kids off at school,  I pulled into the gas station to buy myself some caffeine.  I’ve slept like shit for the past few days, and I’m beginning to drag.  I walk up to the counter to make my purchase.  The cashier takes a look at me and says “Wow, did you do that?”

Uhh, what?  Do what?  Did I break something? Spill something?

It took me a few un-caffeinated  seconds to realize he was looking at my One Epic Run 24 hour sweatshirt.

“Oh, yeah, uh, yeah I did.” I reply sleepily and sheepishly.  “But I only made it just over 50 miles, and not even close to 24 hours” I add.  I have no idea why I felt the need to downplay the accomplishment, but I instinctively do.  I do that a lot… it wasn’t the 100 I had hoped for.

“Dude.  That’s so badass.” he says.  I smile, thank him, pay for my caffeinated goodness, and walk away.

And just like that I  suddenly  realized how incredibly disconnected I feel from my former (sometimes)  badass self.

We sacrifice time, energy, and a ton of mental sanity to train for some sort of ridiculous race.   Then we run said race, and declare “that was totally worth it…but I’m ready for a break.”  So we take a break from training for a specific race, and relish in the fact that there is no training calendar to follow, no long runs to plan your life around.  And you enjoy that free time… 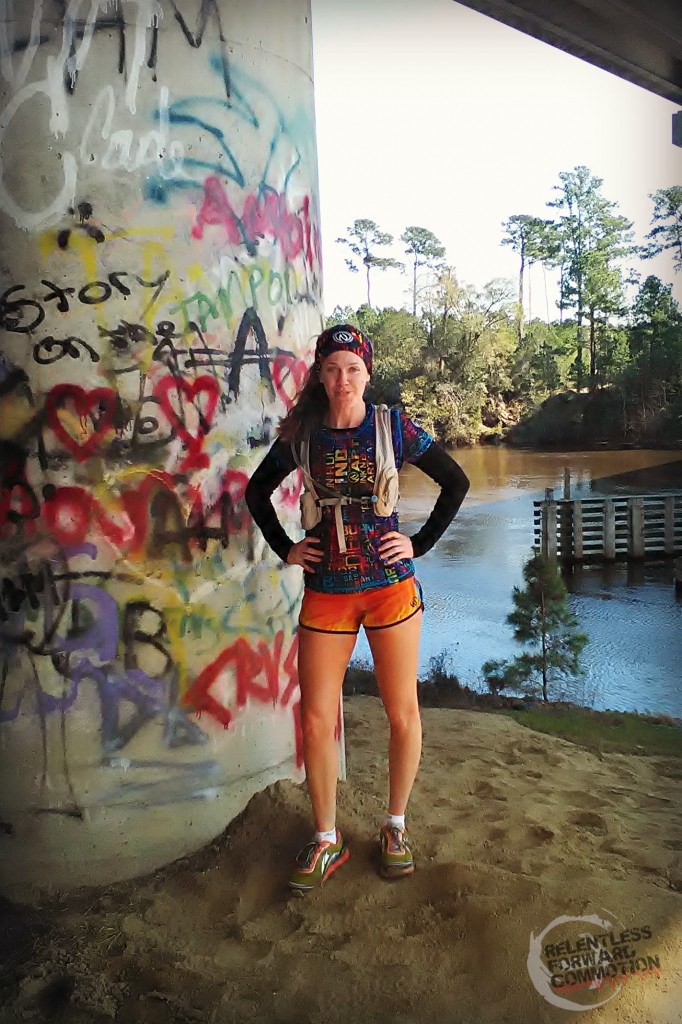 These days, even a few miles feels like an ultra. At least my outfit is bright and cheery.

…until one day you wake up feeling completely, and utterly lost.   So you grasp for something else, something big.  You find a race to train for, you  make a training schedule, dutifully post it somewhere (your wall, the computer, your planner) and suddenly all is right in the world again.

I realized this morning that I am grasping.

I feel a wild combination of wanderlust paired with lackluster monotony.  There is so much that I WANT to do, but I’m in a situation at the moment where I don’t have the time or finances to do any of them.    But, as the saying at the top of this blog…and the one permanently tattooed onto my ribcage…goes:

Adventure may hurt you, but monotony will kill you.

I’ve got to grasp for something.  The monotony is chipping away.

(Side note to any of my clients reading this: see?  Everyone has their ups and downs.  I promise you I wasn’t making that up.  Even long time, experienced runners who think running for hours and hours on end is “fun” get into funks. Ebb and flow, my friends, ebb and flow… )

I’ve, in theory, got the Grand Canyon trip coming up, and I’m working hard at ensuring that it really happens. I don’t think I’ll allow myself to get excited for it until the plane ticket is paid for.  So until then, I need something else.  And seeing as though it is already February, and so many races we’ve been eyeballing are in May, it appears it’s time to pick a race and make a training schedule.  Because believe it or not, today and the end of May are only 15 weeks away.

When we first moved down here, our goal was to come back and visit Vermont for the entire month of May.  A lofty goal, of course, but one we figured we could pull off with some saved income combined with the fact that I can work from almost anywhere, as long as I have my trusty laptop by my side.   But hear we are, 8 months later, with absolutely zero saved income and no earthly idea of what we are doing.  I fear a trip back to Vermont to “visit” will end in “staying”.  And though a huge part of my heart wants that, the other huge part knows that it won’t be for the best.  Change is fucking hard, and I need to suck it up a little bit longer.

Green, beautiful, did I mention green? Vermont. View from the Infinitus course in 2015.

The point is, we had originally intended to run the Endurance Society’s Infinitus again.  But day by day, that’s looking less and less possible.   So we’ve got to find something closer to home.

A handful of people from our local running group are running a 6, 12, and 24 hour race in North Carolina during the end of May.   Black Mountain Monster.  Perhaps it’s time to give 24 hours another shot, and see if we can’t go a little further this time.   Far enough that next time a gas station attendant asks me if I ran a 24 hour race, I’ll respond with “You’re damn right I did! “.  Accompanied by a smile and a high five of course, as to remain friendly and excited, and not appear to be a pretentious running asshole.

Yes, I think that’s a good plan.  Black Mountain Monster.  Because sometimes plastering a giant training schedule on your wall is all it takes to turn your world right side up again…

Previous Post: « Everything You’ve Ever Wanted to Know About Running*: Volume 2
Next Post: Cankles & Keeping it Real. »