Tonight my heart aches for my home state of Vermont.

I’ve been glued to facebook as the photos and videos of areas I grew up playing in and around are destroyed by flash floods caused by Hurricane Irene.

The irony of my youth spent in the Green Mountain State is that everything I loathed about the area is everything I miss about it…and everything that makes this disaster even more devastating.  An area very heavy with history and tradition, that fought tooth and nail, to this day, to avoid modernization. While the rest of the world constantly tries to out-do itself with bigger, faster, stronger, more, more, more….Vermont stands behind the philosophy of “if it ain’t broke, don’t try to fix it”.  And not because of reasons many would assume, such as poverty or lack of resources…but more a deep rooted sense of pride in the way things have always been done.

I remember when I was younger thinking it was so incredibly lame that I had to drive an hour and a half just to find a decent mall to shop for clothes, and 30 minutes just to get some groceries. Instead, the land was spread out with tiny little villages and towns consisting of “general stores”, homes, churches and bridges that were hundreds of years old.  You could drive through 4 or 5 different towns and never once see a stoplight or a chain/franchise restaurant/bank/gas station.  I remember, as a teenager who knew everything, how “weird” it was that families consisting of multiple generations grew up and raised their families in the exact same town. Never leaving to spread their wings and explore the country.  As an adult, now I realize how precious (and in modern society, rare) those family roots really are.

Vermonters have an amazing pride in their state and it’s history.  Listen to the devastation in the voices of these people as they watch the Lower Bartonsville covered bridge (built in 1870) being swept away by raging waters.

Closer to my former “home”, the Ottauquechee covered bridge has been all but destroyed (this video being early in the flood, last I saw/heard the road isn’t even there and the bridge is barely hanging on), and Simon Pierce Glass /Restaurant, as well as the surrounding buildings, businesses, and Inns are most likely a loss. 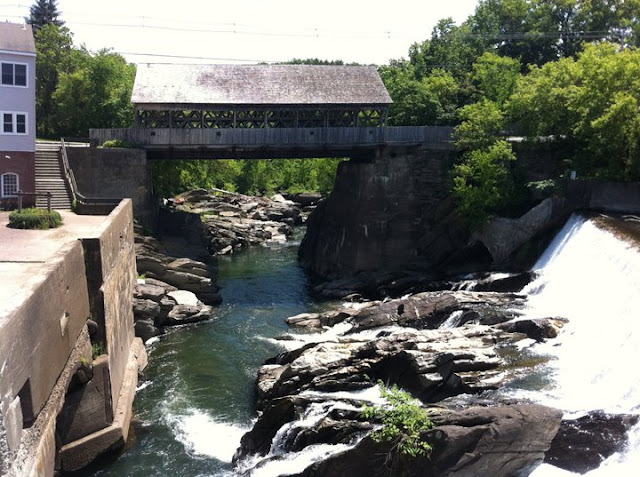 ﻿Homes have been swept away or flooded. Historical “downtown” areas are underwater. Sports fields and golf courses have been engulfed.   Bridges and roadways have crumbled into the raging rivers.   Reports as to how much damage has been done aren’t even in yet, as the flooding is expected to continue well into tomorrow.  I can’t help but think of how ironic it is that all of my Vermont friends were sending ME well wishes, down here in the Carolinas, to stay safe as Irene blew threw.
Who would have ever guessed that THEY, tucked hundreds of miles inland from the coast, would be the ones mother nature unleashed her fury on.
It’s a very hard feeling to describe, but it’s eerie and heartbreaking to see the area you grew up in, the place you consider “home” just destroyed.
But, the other thing about Vermont is that the state, and it’s people, are incredibly resilient. I mean, when it snows from October to April every year, you kind of have to be.  They will overcome, they will rebuild, and life will carry on.    But tonight, I will pray for them.   And I hope you will too.
Stay safe my friends. My heart is with you.

Once, I gave up drinking alcohol for forty days. Then I wrote about it, because that's what I do. 60 more days passed, and I found myself 100 days sober. Something I had not once done before in my adult life. I liked how I felt, so another 100 days of no drinking passed. It wasn't easy, of … END_OF_DOCUMENT_TOKEN_TO_BE_REPLACED

About a decade ago, I was a happy road runner, traversing the paved streets of major cities while collecting new half and full marathon finishers medals. I remember thinking that a race had outdone themselves when I'd show up to an aid station, and in addition to water and Gatorade, they had … END_OF_DOCUMENT_TOKEN_TO_BE_REPLACED

When you were little, chances are your mom was always hounding you to "go outside and play". Little did you know, she was doing more than just trying to get you out of her hair - she was helping you stay healthy. As adults, we seek alternate ways to enjoy the outdoors that differ from the … END_OF_DOCUMENT_TOKEN_TO_BE_REPLACED