I’ve always sworn I’d never post about food.  50% of that decision was because I just don’t cook.  I’m not a foodie, the kitchen bores me, you get the idea.  I will make someone a horrible housewife. The other 50% was because I’ve always had the point of view that posting about what I ate is a relatively boring topic*.  I’ve never understood the “What I Ate Wednesday” theme that is wildly popular among the healthy living blogger crowd, mainly because I simply don’t care what other people eat, and I’m certain no one is entertained by the food I put in my mouth.

Well, needless to say a new page has been turned over in Heather’s world, and my family is both thrilled and somewhat terrified. But let’s start at the beginning.

The Universe seemingly aligned at just the right time to catapult me out of my bagel, chips, and pizza loving ways (hey, at least I gave up the Mtn. Dew a few years ago).   Yes, you’ve read that right new reader friends!  I’m a crazy active fitness professional who eats crap foods!  I’m not proud but I’m also not ashamed.  We all have our weaknesses, and I’m working on mine.  But back to the point.   Between feeling like crap after a gluttonous holiday season, a loved one falling severely ill due to their lifestyle/health choices, rehashing (and thus resurfacing) all of my sports nutrition knowledge, and reading the hilariously inappropriate Thug Kitchen cookbook…it was like a big smack in the forehead to wake up and start caring about what I eat.   Obviously, my health is the biggest concern here, one that I should have started caring about a good 10 years ago.   But I’d be lying if I didn’t admit that taking the recent continuing education course in sports nutrition didn’t make me realize that as an athlete, I’m totally selling myself short by improperly fueling my body for both performance and recovery.    I have big plans for this year as far as building a base for the aspirations I have for next year and beyond (oooh, cryptic vague blogging!) and there is no way any of it is going to work without proper fueling.

So reluctantly, I stepped into the kitchen.

No, scratch that, first I reluctantly stepped into the grocery store with a long list full of fresh foods, some of which I had never even heard of.  And only then, after aimlessly wandering in circles, asking both employees and nice looking older ladies where I could find things such as chipotle peppers and naan, did I step into the kitchen.

First up, as mentioned last week, was my rendition of the vegan BBQ Bean Burritos with grilled peach salsa from the Thug Kitchen Cookbook

.  I assured the family that I had this under control, as I painstakingly tried to cook while staring at the recipe on my tiny not so smart phone that kept shutting off.   I may or may not have cursed out loud when I spilled half of the beans in the sink and on the floor, and cried over the stove due to the fumes of cooking onions and chipotle peppers.   And I may have substituted Newman’s Own Peach salsa for the homemade version because everyone starts somewhere.  The burritos didn’t look pretty, and my food photography on my not-so-smart-phone leaves something to be desired, but damnit those burritos were GOOD.  Like really, really good. (And really hot, incase you were thinking of making them yourself.) 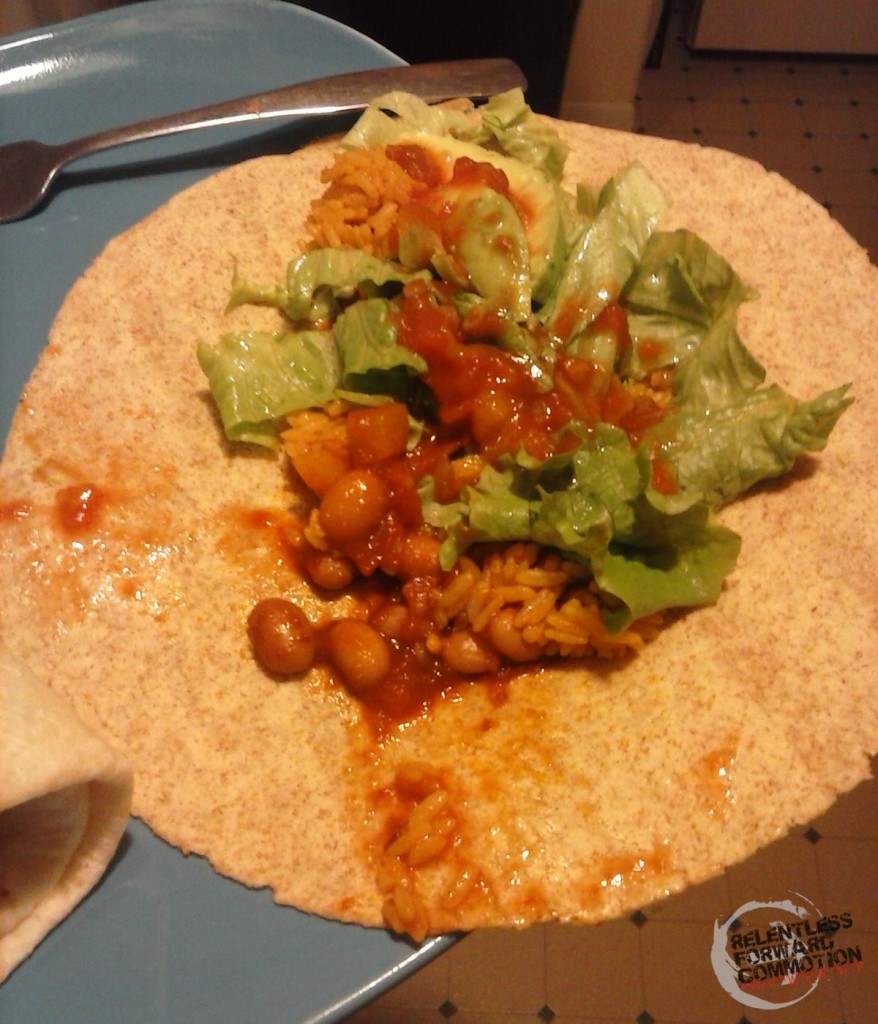 And I don’t think the family faked liking the burritos, or if they did, they did a damn good job at choking them down and convincing me that I succeeded.

Now, back when we lived in the apartment, I had torn a recipe out of a magazine, intent on one day making it, and stuck it to the refrigerator door.  When we moved to the house, I brought said magazine clipping and stuck it to the NEW refrigerator door, still intent on one day making it.   Almost a year later of course, I still hadn’t made it (no one is surprised here).  Feeling on a roll after my possibly successful bean meal, I decided that even though I volunteered to cook Wednesday night dinners, I would step up my game and cook Sunday night as well.

I may have burnt the balsamic sauce, but much to everyone’s surprise, I cooked a successful meal AGAIN.   And therefore I took a picture to post on Instagram, because it’s 2015 and that’s what you do.  Hashtag #NoOneGotFoodPoisoning. 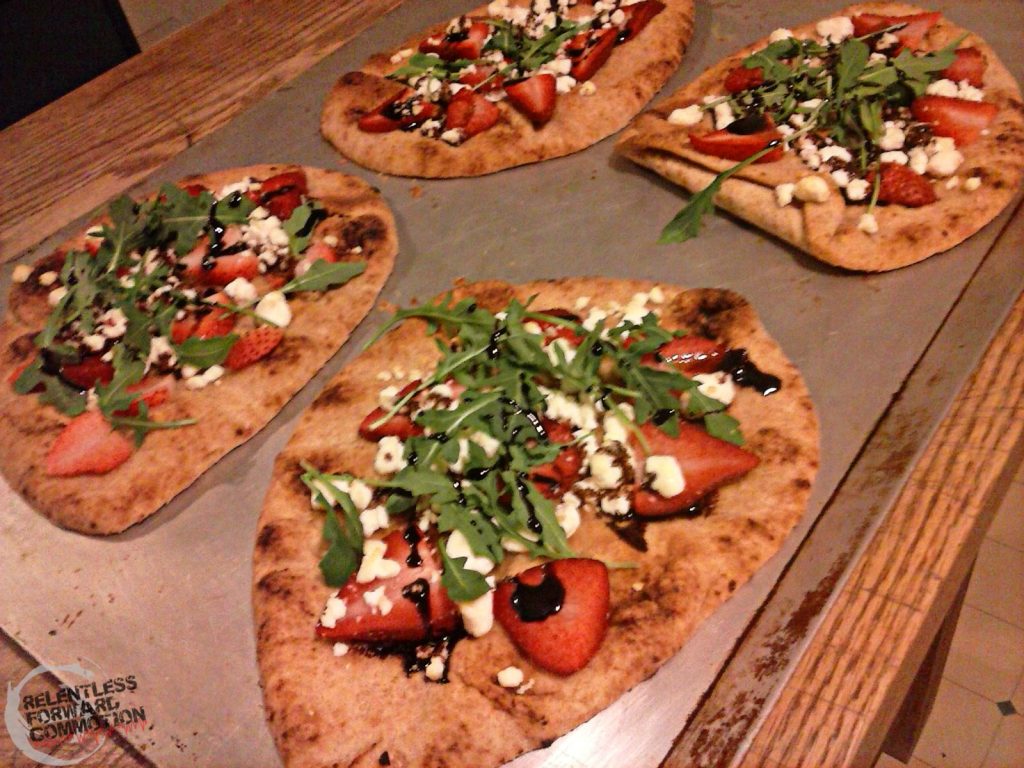 Since a bunch of you asked for the recipe, here it is.  Note: it’s not mine, all credit goes to Fitness magazine .  My kitchen brain isn’t capable of such creations…yet.

So, being Wednesday, I’m in charge of dinner again tonight.   I have absolutely no idea what I’m going to make, thus I’m scouring Pinterest for a recipe from someone who actually knows what they are doing (and knows how to take great pictures of said food).  Something to top last weeks perceived successes.  Thus, I dub today “What the heck are we going to eat Wednesday”, or #WTHAWGTEW.  Vegan or Vegetarian without too much dairy suggestions welcomed.  EASY to make recipes preferred because…it’s me.   I’m new at this.  Thanks friends!

Once, I gave up drinking alcohol for forty days. Then I wrote about it, because that's what I do. 60 more days passed, and I found myself 100 days sober. Something I had not once done before in my adult life. I liked how I felt, so another 100 days of no drinking passed. It wasn't easy, of … END_OF_DOCUMENT_TOKEN_TO_BE_REPLACED

About a decade ago, I was a happy road runner, traversing the paved streets of major cities while collecting new half and full marathon finishers medals. I remember thinking that a race had outdone themselves when I'd show up to an aid station, and in addition to water and Gatorade, they had … END_OF_DOCUMENT_TOKEN_TO_BE_REPLACED

When you were little, chances are your mom was always hounding you to "go outside and play". Little did you know, she was doing more than just trying to get you out of her hair - she was helping you stay healthy. As adults, we seek alternate ways to enjoy the outdoors that differ from the … END_OF_DOCUMENT_TOKEN_TO_BE_REPLACED