Back in the good old days of myspace, I used to blog. I blogged about whatever popped into my head that I felt like putting on paper (or a computer screen). Usually random thoughts, rants and raves, or exciting news about my day to day life. I didn’t think twice about who read my posts, besides the only people who could see it were friends and family, and they already knew what they had gotten themselves into long ago, haha. It was stress relieving, almost therapeutic, to throw caution to the wind and write whatever I felt like writing.

Eventually myspace washed up, and at the urging of all of my loyal blog readers (aka friends and family), I too moved on to facebook. Except facebook didn’t have a blog option, so I wound up here, in the giant blogosphere known as blogger.com. In the beginning, it was the same, rants, raves, and then moved on to general blurbs about my running. Never in a million years would I have guessed that over a year and a half later, I’d have almost 500 public followers, a few hundred more who roll underground. It seems unreal that people would actually enjoy the things I have to say. I am not, nor have I ever considered myself a writer, but apparently, a few people like to hear what I have to say. But unbeknownst to me, at some point in this adventure, an underlying pressure surrounding what I wrote on this blog started to hold me back.
I didn’t realize it until a chat with fellow running mom B the other day, that as of late, I’ve started and deleted way more posts than I’ve actually published. Why? Because suddenly I fear what I write has live up to the standards of those 500+ strangers who take the time to read my blog. I have to live up to the countless emails I get from new moms telling me what an inspiration I am to them and how the fact that I juggle kids, school, and running makes me totally kick ass.
At the end of the day, I started blogging as an outlet for me to say whatever I want. Not for anyone else. And therefore, I’m just going to go ahead and say it…the truth behind the absolute lack of posting around here lately boils down to one thing: these days, I do not feel so kick ass.
No, I feel like a giant running fraud.
I’m pretty sure that at some point in every one’s life they have a mini fall out with their favorite hobby or pastime. Heck, I personally have hobbies come and go as frequently as the latest pre-teen fad (silly bands anyone?) and I tend to get equally as obsessed. I’ve got a room full of scrabooking stuff and a cricut that haven’t seen the light of day in over a year.
But for me, running is so much more than just a passing trend, which is probably why I have my big girl panties in such a wad over all of this.
This past year has been more challenging for me than any other year of my life. Call it a quarter-life crisis (yes, I fully intend on living to see 112 years old), but between kids, school, work, and so many other things that will never see the world wide web, some days I feel as though I’m trying to pass the hardest test I’ve ever been given. “Life” happens to the best of us, and lately, I’ve been struggling finding the time to run (or workout period).
No, I take that back. Where there is a will there is a way. Lately, I haven’t had the will.
And as I have touted on this blog many times before, “running is cheaper than therapy”. But when there is no running…well you can imagine the downhill spiral that I am creating over here.
Lack of will to run = lack of therapy = gigantic pity party for one. Its an evil, vicious cycle, and I don’t even recognize myself anymore. 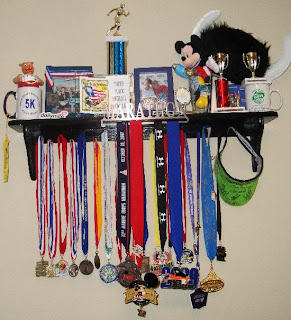 And to top it off, at some point since I started running a mere 3.5 years ago, I have put this ridiculous competitive chip on my shoulder. The other day, I stood in my room staring at my rack of medals, and told Rich “you know, I don’t feel like I earned a single one of those.” And that, oddly enough, is the truth. Yeah, I finished every one of those races, but I never trained nearly enough. Yeah, I legitimately brought home those trophies by being “3rd female overall” or “1st in my age group”, but I feel like I was just lucky that the faster girls didn’t show up that day.

Maybe it’s because I surround myself with such amazing kick butt runners. You know, the ones that have such dedication that they ALWAYS find a way to run or to stick to their training plans. The ones who can’t imagine running a half marathon in anything slower than 20 minutes faster than my PR. I don’t feel that a single bit of my running career is brag worthy. Fast or slow, I don’t feel like I’ve earned any of it.

I tell people every day to be proud of THEIR accomplishments, and I genuinely, truly mean it. So why is it I hold myself to a different set of standards?
But instead of this feeling of inadequacy driving me to work harder to achieve my goals, it’s done the opposite. Makes me want to sit on the couch. Makes me come up with every excuse under the book. It’s too hot. The kids. I have housework to do. I’m too tired to get up early.
I haven’t taken sports psych yet, that’s next semester, but I can tell you one thing, I’ve got issues. I’m never going to be a professional runner, my livelihood will never depend on how fast I finish a race, or how many miles I run a week. So what gives?
Did I hit my head when I fell at the Warrior Dash and I just don’t remember?
Maybe it’s burn out (probably). Maybe it’s something more (likely that too). I need to find that drive again. That love for what I do. It’s lost, and I can’t remember where I put it.
Writing this post was easy, pushing “publish post” the hardest part, but this one, my friends, was for me. We all have our weak moments, and this is mine.
And now that it’s done…I think I’ll put the boys in the jogger and go for a run, and try my hardest to NOT care how many times I have to stop and walk.

Previous Post: « Money in the bank
Next Post: The great big Sunday Review on Thursday, from the library. »