“A woman is like a tea bag. You never know how strong she is until she gets into hot water” — Eleanor Roosevelt

Someone in the bloggy world recently posted about how runners/athletes are so quick to share our most intimate physical details here in the blogosphere, but hesitate to even hint in the direction of any personal, emotional details. I wish I could remember who posted it so I could give them credit, but quite honestly, I can hardly even remember what day of the week it is right now. Anyway, it struck a cord with me over how incredibly TRUE that is. We are the first to tell you EXACTLY where we have chaffed (I’m doing better, by the way, haha), what kind of bodily fluids came out of what orifices on our recent run/bike/swim, or EXACTLY how that last GU at mile 15 affected our GI system. Poop. Blood. Blisters. Pee. Snot rockets (or farmer blows, depending on which part of the country you are in). And if you are a mom, you’ve often got a whole slew of other bodily functions to add to that list. If I’ve heard it once, I’ve heard it a million times: there is no such thing as TMI (too much information) in running.

Except, as that blog post stated, when it comes to our emotional side.

I’ve toyed back and forth with writing and posting this one for awhile. There are some things you often don’t want thrust into the limelight, for whatever reason. I mean, I know this isn’t TMZ or E!news, just my own little corner in the world wide web, but privacy is a hard thing to maintain these days. However, for all of the BAD there is surrounding the internet, I’ve seen all of the GOOD that comes out of this community particularly. And besides, as humans, especially us crazy athletes, it’s so hard to admit weakness. Admit when you don’t have things under control. And so I hesitantly reach out, in hopes for maybe finding some sort of suggestion, information, anything that can help, but would never come along if we didn’t just put it out in the open.

Anyway, my partner in crime, still a few days shy of 29 years old, is being attacked from the inside out. In the matter of 6 or so months, he’s gone from a fit, muscular young man, starting to dabble in MMA with dreams of one day competing(fighting), to what I can only compare to as someone trapped in the body of a frail senior citizen. He’s withered away, limps around the house, wakes up with joints (hands, knees, shoulders, etc) that are blue and swollen. A handful of doctors and specialists have already ruled out rheumatoid arthritis, and we patiently await the next specialist, who has a waiting list until June for new patients. They believe it’s some sort of autoimmune disease. Or maybe not. Seems like no one has any ideas. But to be quite honest, the medical field, of which I usually DO put a good deal of faith in, has been less than helpful. We have encountered many a skeptical look from doctors, one who even had the audacity to say “well, everyone experiences pain every now and then”. Huh. I know they don’t know him from Jon Doe, but If only these doctors could see how I’ve watched this man quickly transform from someone constantly bounding around the house, hanging from the door-frame pull up bars, or shadowboxing with invisible people/objects (and me scolding him “you’re going to break something!!” like he’s another 5 year old in the house) to someone who can’t even pick his kids up most days. Someone who is practically in tears just from the act of bending over to put socks on. Someone who dreads going to sleep at night because he knows how painful it’s going to be to even try to get out of bed the next morning. Maybe, just maybe, they’d be a little more helpful.

And so, as any good wifey would do, I’ve stepped up to the role of caretaker. Of which, I certainly don’t mind, he would do the same for me. But he is the bread winner (for the most part) around here while I go to school, so it is important that he is “well” enough to make it to work. So I pick up all of the slack (again, willingly) so he can rest. And some days are better than others. But it seems every good day is followed by a much worse day: whatever his body was “kind” enough to let him do when he was feeling alright (like, kick a soccer ball around with the boys) he will, without fail, physically pay for dearly the next day.

It breaks my heart to see him suffer like this. It breaks my heart to see my kids not quite understand why Daddy can’t wrestle around with them like he used to.It breaks my heart I don’t have as much time to do those things either, because someone has to do my homework, the laundry, the dishes, cook dinner. And as much as I’m fighting and trying so hard not to let it….this “mystery” ailment is breaking my spirit. It SUCKS to see someone you love falling apart. It SUCKS to see your partner, your best friends, turn into someone else. I don’t care who you are, you can’t be in physical pain 24/7 and not let it affect your attitude. And most of all, it SUCKS that there is not a DAMN thing I can do about it.

But at the same time, who am I to complain? The only physical pain I ever feel is self inflicted. There have been days the two of us limp around the house together, and I feel guilty as hell. He would give anything for a pain free day, and right now, I would give anything to be able to put in a 20 mile run that leaves me grasping at the handrail just to make it up and down the stairs. So I don’t. And I don’t complain. I keep it all inside, except for a few vents to a few trusted people. I play my recent decline in my grades at school down as me just having “senioritis” (partially true). I don’t explain to the masses that while I may SEEM like I’m totally slacking off with my running, the truth is, I don’t have much of a choice. And when I do have a choice, when I do have the 5:00 am time to myself, the truth is, I’m effing exhausted. It’s amazing how much MENTAL exhaustion can make you PHYSICALLY tired.

But after a few weeks of really, really feeling hopeless, feeling like I’ve hit rock bottom, I’ve decided….I’m not giving in. I’m not. I’m not letting my family hide behind this anymore. I mean, who am I trying to fool, pretending like I’m holding it all together, that everything is just perfect over here? This sort of stuff happens to REAL people, ALL of the time. Cancer. Disabilities. Debilitating accidents. Autoimmune diseases. And whatever the f*ck is trying to bring MY family down. I’m not going to continue to pretend that this isn’t happening, because it is. And who knows, maybe sharing our story can help someone else. Hopefully, sharing this story can lead us in the direction of some more answers.

The last few months, but particularly the last few weeks, many missed miles and skipped workouts, many sleepless nights, ten pounds of added weight from comfort eating, a closet full of clothes that no longer fit, a ton of tears and more bottles of wine than I’d like to admit…have all taught me something. They’ve taught me that we, as humans, are NEVER in control of what happens to us. Never. But what we are in control of, is how we let those things affect us. We are in control of how we react to the situations we are faced with, and what we take from each experience. A wise First Lady once said “No one can make you feel inferior without your consent” and she was spot on. I am NOT the victim in this situation, and I REFUSE to become one.

So that, my friends, is a very long explanation to the question none of you asked in the first place, of why my blog posts are become infrequent, my twitter page empty, and my dailymile graphs stalled at “zero”. I may be temporarily down, but I promise , I’m not out. If you made it this far….thank you. I know this isn’t a normal post from me, but sometimes, you just need to scream from the rooftops before you can begin to move on. 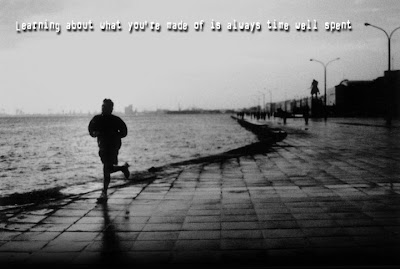