I give myself a grade of C for week one of triathlon training. That’s a breakdown of an A in the pool, C in the running department, and F- on the bike (because I never got on it).

I started with the best of intentions, like I always do. But my body had other ideas and I ended the week on the couch with a fever and general allover “ick” feeling, watching episode after episode of Kipper the Dog to keep the toddler rambunctiousness at bay.
I’m a firm believer in listening to your body when it tells you to rest, especially when it’s “rest now” signals include swollen lymph nodes accompanied by alternating chills and hot flashes. So rest I did, but it did not take away from the giant slacker guilt I felt when emailing coach at the end of my very first week of training telling him I needed a “first week do-over”. I skipped my tempo run and only bike ride scheduled for the week. Whine, whine, excuse excuse. I hate excuses.
Late yesterday afternoon, after doing laundry load #5 in the new washing machine (there’s an adventure I forgot to tell you about…let’s just say it involves a large taco bell cup and me emptying the washing machine like I was bailing out a dingy…good stuff!) I felt a surge of energy. Perhaps it was the new washing machine fumes, but I felt like a new person. As soon as Rich got home, I hopped in the car and took off to the gym. There was hope yet, I could end this first week of training on a good note with my scheduled 1 hour run.
Now one hour on the treadmill makes me shudder as much as the next person, but after doing a face plant on my back deck the other night, I wasn’t taking any chances. Yes, ice, at the beach, in South Carolina. I don’t remember that being on the travel brochures. So treadmill it was, and I was excited to test out my latest addition to the shoe family…. 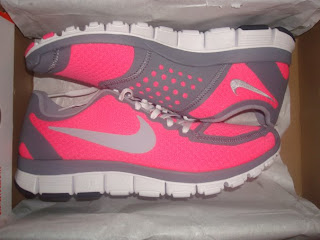 oooh ahhhh sooo preettty! Nike Free 5.0 V4’s. I’ve been coveting a pair for a while now, so I was thrilled when the fed ex man finally dropped them off at my doorstep. Now I’m certainly a glutton for punishment for putting these puppies on and attempting an hour long run in them on their first day out of the box. I promised myself I’d stop if I felt even a twinge of pain. I never did. As expected, the minimal shoe caused me to step lighter, and it was nice to not have the normal “clunk clunk” of heavier shoes on the treadmill.

I’ve been emailing back and forth with a wonderfully helpful employee of Newton running regarding my foot pain. Long story short, from all sources it appears the foot pain I suffered from the past month was a direct result of my feet being “out of shape”. Years and years of running in highly cushioned shoes has coddled my foot into not having to do any work when we are out for a run. Jumping into the Newtons, which are a much more minimal shoe with less cushion/heel lift, put that foot to work, and fast. Too fast (my fault). When Newton recommends that you start out “slow” with these shoes, I didn’t realize exactly how slow they meant. 30 miles in two weeks wasn’t slow enough.

So long story short, it was the Newtons that caused my pain, but they were no more at fault than the dumbbell that makes your shoulders hurt after you lift for the first time in a year, haha. I will not give up on them, and I am keeping them in the shoe rotation with the hopes of eventually steering away completely from the big, cushy shoes. While you probably won’t see me running down the street in vibrams any time soon, I am very interested in the concept of barefoot running, and I’m continuing to do my research.

But back to the treadmill run. After I finally got dibs on one of the 2 out of 4 functioning treadmills at the gym (seriously, division one school, you need more than 2 functioning treadmills. Can I put a note on my next tuition check “must be used to buy treadmills”?) I ran an effortless hour. VO2 max test is tomorrow (yay!) but I ran at an “estimated” zone 2…about a 9:30 mile. In other words, the “I can go all day” pace. Well, all day if I wasn’t on the treadmill…around the hour mark that thing makes me dizzy (reading the closed caption version of Lady Gaga and Sir Elton John’s performance at the grammys probably added to the dizzying effects).

I went home on the highest running high I’ve had in a while. At 11:30 pm, while I was still jacked up on endorphins, I realized why I prefer to run in the mornings. Today, I’m tired. Which is why this post is the most scatter brained random thing I’ve probably ever written.

But the good news? My foot doesn’t hurt. Not one bit.

Here’s to an A+ week 2 of triathlon training.