Monday night I was faced with a decision.

Rich was coming home in a few hours, the kids were clean, fed, and content, and therefore I found myself with some pending guilt-free time to run.   Run without time constraints, run without worry if my kids were OK,  run without anyone waiting on me, just run for ME. To a running mom, guilt-free running sessions are priceless, and must not be wasted.

And then I got a text from Hope asking if I was coming to the running clinic that night.

Oh yeah, the running clinic…the one I had volunteered to help coach.  I was really excited about it when it started, I really was.  But then I had missed the first two weeks…sick kids, funerals, all bummer things that are unfortunate, but I suppose a necessary part of life.  And so by that point I had figured, 3 weeks in is probably too late for me to be of any help, they already had some great volunteers from our running group. Besides, I’ve been slacking on my own training and should really push myself to get a little more serious.  I’ve got my first 70.3 tri looming just a few months away.  I really needed a good, hard, selfish workout that day.

So, in typical mom fashion, as I was having an internal debate over what to do, I was simultaneously cleaning the house. Multi tasking, its what moms do best.  As I was digging through a bag that was filled with the most random assortment of stuff that had gathered on the kitchen table over the last few months (I’m incredibly unorganized when it comes to housework, don’t judge) I came across a handwritten note.  I glanced at the signature on the bottom, and just as I had when I received the note a few months back, I totally thought it was from my friend, Tara Tosta.  But instead, it was from Tara Costa (see how I get them confused?) kick butt contestant from season 7 of the Biggest Loser.  I had won a T-Shirt from following her new Inspire Change foundation on twitter, and Tara included a note in the package.  I dug a little deeper in that bag of random stuff and sure enough there was the shirt (yeah it was stuffed in a bag, sorry Tara!)   Believe me, it’s not that the shirt wasn’t cute enough to go into immediate workout rotation, it’s just that it was way too big for me, as far as a fitted tech tee goes.

But I took the shirt out and held it up.  Inspire change.  I’m not going to get all sappy and cheesy and talk about fate or try to convince you that Tara Costa from the Biggest Loser had tapped into my subconscious at that very moment …but the truth is, when I looked at the shirt-that-was-too-big, I knew exactly what I had to do.

I threw that shirt in the hot water wash cycle, and then on the “high” setting in the dryer in my best attempts to shrink that bad boy.  It didn’t really work, but a few hours later, I put it on anyway, and headed to the running clinic.

And there I met about 20+ women, all out looking to better themselves. Some straight off the couch working their way up to even a jog, some who have completed half marathons and didn’t know what to do next, and pretty much everyone in between.  I was assigned to a group of about 5 women, and we took off for a 3 mile, non stop run, with hard/easy intervals. As keeper of the Garmin, I ran with them, talked to them, pushed them, and hopefully encouraged them when they needed it. Even better, I had the pleasure of telling them, some of whom swore they couldn’t break a ten minute mile, that we ran our “hard” intervals at a sub 9:30/pace.

At the end of the 3 miles, we met back up with the rest of the group. I saw the immediate change in every single one of those women (and two men, shout out to Tim!) : 30 minutes earlier everyone was relatively quiet, and now, post run, our group leader had to yell at everyone to shut up so he could say a few words to the group.  You could feel the “runners high” in the air, you could see the confidence in their sweaty faces.

Coincidentally, I left with my own endorphin filled runners high that surely surpassed the one I would have earned running 5 miles by myself at home that same night. I left feeling content, and reassured that all of this struggle and chaos over the last 4+ years to pursue a degree in the health/exercise/fitness field, struggle I still face even just a few days from graduation, has been totally worth it.  And I also left with a big reminder that we all need from time to time:  that it’s not about how fast, or how far you run…it’s about what you take from the run.  It’s about the LOVE for the run. And I am incredibly thankful for this opportunity to spread that love.  Because as kick butt as qualifying for the Boston Marathon or placing in some more local races will feel, helping someone else reach THEIR goals or do something they thought was out of reach feels a thousand times more rewarding.  I can’t wait for next week.

So thank you Tara, for the shirt that inspired which direction I took that night, which hopefully in turn, inspired continued change in someone else.  Mission accomplished 🙂 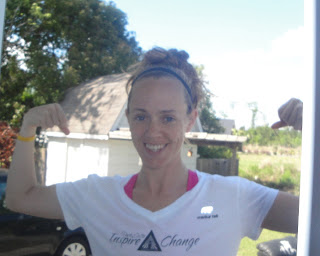