I spent the first 2.5 years of my undergraduate work as a marine biology major.   I had a professor who used to joke that immediately following Discovery Channel’s “Shark Week“,  applications for the marine bio program would come flooding in.    It was only a slight exaggeration, I’m sure, as year after year the number of students who eventually graduated with a degree in marine biology were just a small fraction of the number of bright eyed, eager students who started their freshman year in the program.    As it turns out,  marine bio was much more about studying foraminifera  or the mating patterns of a bivalve species no bigger than my pinky finger, rather than swimming with dolphins or tagging great whites off of some tropical coastline.  It was at some point during my junior year, elbow deep in trying to decipher various types of deep sea sediments and how that correlated to the pH of the water, that I decided I too, was out. The reality of marine biology was far more vapid, monotonous, and complicated than the romanticized, adventurous version often portrayed on television (or at your local aquarium).

Saturday I spent most of the day, and all of the evening, glued to Ironman.com watching the live feed from Ironman Florida and tracking my sister’s progress. 140.6 miles of triathlon in 17 hours or less.   I spent a good part of the early afternoon cursing the obvious headwinds based on her bike splits.  I spent part of the early evening arguing with my mother that Florida was NOT in a different time zone, and then rejoicing over that fact that indeed it was (turns out Panama City is on Central time, and clearly my geography needs a little brushing up), meaning Holly was a whole hour ahead of where I thought she was.   I spent all night in bed watching the live feed from the finishers line from my laptop.  When I couldn’t hold my eyes open any longer, I set my alarm clock for ten minutes before I expected Holly to finish based on her last few run splits.

The alarm went off, and through blurry eyes, Geoff and I watched as my sister approached the finish line.  We watched as the announcer, now standing in the finishers chute, stopped my sister and grabbed her by the arm before she could cross that line.

I held my breath as he turned her around to face the crowd, and said “Holly…Holly…not so fast. (painfully long pause.)  Holly….. (yelling in unison with the crowd) YOU. ARE. AN IRONMAN!”   I cheered out loud from my bed as she ran towards the finish line, arms held in the air, and then instnatly started crying when she started crying as she passed under the clock, an official Ironman finisher.

I drifted off to sleep that night with a smile on my face and on my heart, so proud of my sister, so happy to see her achieve such an epic goal…again (this was her second 140.6 finish).

The next morning I woke up, and per normal first-thing-in-the-morning conversation, was asked by Geoff how I slept that night.  “Good,” I replied, “how about you?”

“Great.  I had Ironman dreams all night long!”

I can’t remember if I replied “Oh, really?” or just gave a blank, shocked stare, but the next thing out of his mouth was “I want to do that.”

A huge part of me hoped this was just passing conversation, just a subconscious reminder of the previous day consumed with all things Ironman.  My Ironman daydreaming has long since come and gone…the reality being that I really struggle with swimming, and am not a fan of sitting on my bike for more than 30 minutes at a time, never mind 6+ hours.

Note: the gun went off and everyone starts swimming…except for the girl in the pink swim cap. That would be me, scanning for gators, and remembering how much I hate swimming.

Plus there is the issue of money (entry fees are well over $600 each), the ridiculous amount of training, and the commitment…we all know my attention span boils down to a “sport of the month” before I’m on to the next best thing.  Yet a tiny part of me flickered momentarily; the part where dreams of ridiculous, far fetched adventures like Mt. Everest and Badwater linger, and that flicker lasted long enough to make my heart skip a beat.  I still wanted to do an Ironman too.

48 hour later, the conversation has not passed.  In fact, last night it sprawled out through an entire leg session at the gym, through the shower, and well into dinner, discussing points like:  what year, what time of year, location, freshwater swim or ocean,  flat, hilly, or rolling hills, would we race together or solo, branded Ironman or any 140.6 will do (I still think any race should suffice),  and of course the fact that we need to find a 70.3 to attempt first. 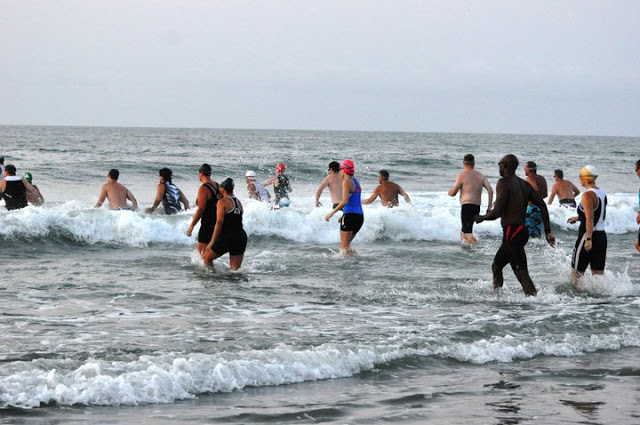 I’m in the bright pink swim cap and blue tank. This was the most terrifying swim of my entire life, I was certain the lifeguards were going to have to rescue me as I was swept out to sea. But somehow, I finished…

The Ironman finish line is to the endurance world what Shark Week was to my alma mater. Disguised and broadcast to the rest of us mortals as bright lights, blaring music, and epic glory (or alternatively, synchronized swimming with Shamu in front of a crowd of thousands),the hidden reality is that the epic moment is actually the culmination of countless hours, weeks, and months of monotonous training and commitment reserved for the few who can survive it.   It is something that so many people see, scream from the rooftops in the excitement of the moment that they too want to do that, but in reality very few actually follow through and complete.

Why I have that urge to be one of them (Ironman finisher, not an orca trainer), despite my fear of distance swimming, despite my utter disdain for riding my bike, despite knowing that training for a race of this caliber will mean weekend races full of mud, barbed wire, and zombies will be replaced with monotonous bricks and centuries, is beyond me.    And honestly, I think that is a question many of us endurance athletes ask ourselves.  Why are we constantly seeking to push ourselves further and further?  What is it about racing that makes each new goal attained not quite far enough, so we must make the next race even bigger?

One thing I know for sure is that I’m excited to have someone by my side who matches my enthusiasm for not just dreaming, but actually achieving these goals.   I never doubt my ability to reach a goal when I really set my mind to it, but knowing that I’ll have his encouragement (and discipline to actually train) makes my heart flutter.

My Ironman goals are still in here, somewhere, but this time I feel no rush to achieve them.  Which in the end, might make achieving those goals even more worthwhile (or at least more realistic…and possibly less painful).  So instead I’ll start small, and attempt to build a relationship with my bike.  Maybe I’ll put it on the trainer today, and see if we can’t spark a little something over the winter.

I’ll let you know how it goes….