Growing up, I was always very close to my dad.  He and I just seemed to understand each other.  We would spend hours talking about everything, from life, to politics, to what I wanted to be when I grew up.  I remember spending summer nights sitting in our backyard by the outdoor fireplace, just talking for hours.

Grow up I did, as all kids eventually do.  In short, my young adulthood didn’t exactly go as planned.  I made a ton of mistakes, I made a lot of decisions I was ashamed of.  I also made plenty of decisions I believed were right for my life, but weren’t necessarily common practice in our society.

The truth is: I feared judgment from my parents.  I had experienced so much heartache in my twenties and early thirties, much due to my own poor decisions, that the last thing I wanted to do was to have to explain myself to the people that I was supposed to make proud.  I was so disappointed in myself, that I didn’t want to be reminded that I was a disappointment to others.  And though I now realize, in retrospect, the judgement was entirely in my own head and heart, not in that of my parents.  Or even if they were disappointed, they loved me anyways.

Because that’s what parents do: they love you unconditionally.

Yet, I chose to distance myself.  I told myself it was a form of self preservation.  I explained it off to others who asked about my parents that “we weren’t that close”.   I called them once every few months, or on the obligatory holidays: mothers day, fathers day, and birthdays,  mainly to update them on the grandkids.  In retrospect, as a parent myself, I can only imagine the heartache that this emotional distance caused my parents.  But whether they knew why I retreated or not, they gave me the space I needed.

I purposefully built walls.  I thought I was OK with this.

You all know the story by now.  Dad was diagnosed with cancer in early summer.  I immediately dropped the aforementioned walls and went home.  And I realized quickly that those walls were completely, 100% unnecessary.  I can’t find the words to tell you how grateful I am that I did that.   Because late is better than never. And while the guilt in my heart keeps trying to poison me with the saying “too little, too late”,  I force myself every damn day to be grateful for the time that I had last summer with my dad.

One quiet afternoon last June, Dad and I were talking about birds.  As long as I can remember, my dad LOVED birds. When I was a little girl, his spot at the dinner table was next to a window that faced our backyard.  Dad kept a bird identification book right there at the table so he could quickly identify what birds showed up to the bird feeder.  He would relentlessly chase away squirrels that tried to eat the bird food, and he would get excited when one of his favorites, the indigo buntings, would show up to nest every spring.

That afternoon as we were discussing birds, I mentioned this beautiful bird that I had only seen twice in South Carolina, once at Huntington Beach State Park, where I first learned what it was, and a second time, when it showed up at the birdfeeder right outside of the very window I’m sitting in front of while I type this post.  It was called a “painted bunting” and while not endangered, sightings of them are rare.   Dad had never heard of the bird, so we broke out the aforementioned bird book, that he now kept by his recliner in their new home in New Hampshire, different from the one I grew up in.  I found the painted bunting, and showed him.

My dad wasn’t ever easily impressed.  He was a man of many words, and he knew a little bit about seemingly EVERYTHING on earth.  But when I showed him that bird, he quietly said in awe, “wow, it’s beautiful!”, having genuinely seen a picture of this bird for the very first time.

And then he said to me “I really hope I get to see one of those someday.”

I told him as soon as his chemo and radiation was done,  he could come down to South Carolina to visit me, and I’d take him to Huntington Beach, where they can sometimes be seen.  I really, truly, with all of my heart believed that it would happen.

But Dad didn’t make it past his last chemo treatment. He never did get to see a painted bunting.

Well before Dad passed, or was even sick, I had always heard the old folklore that the sighting of a bright red cardinal was representative of a loved one who had passed.  The bird was symbolic of the loved one trying to visit, trying to get your attention, or simply trying to reassure you that everything was going to be OK.  In fact, the notion that cardinals are messengers of spirits of loved ones exists across many cultures and beliefs.

But for years, we have had cardinals outside of our apartment window, and I’m going to be honest with you: they are kind of little assholes.  It’s highly entertaining of course, but they bully all of the other little birds that try to visit the birdfeeders on our window.  Kind of like the Blue Jays my dad used to rank just below squirrels, on the level of “most obnoxious creatures at the bird feeder”.  I don’t think my dad would use a cardinal as his messenger.

Instead I’m going to hold on to the notion that my little feathered visitor, the one sent to reassure me that everything is going to be OK, will be the painted bunting.  But instead of waiting for it to visit, I’m going to keep it close to me, forever: 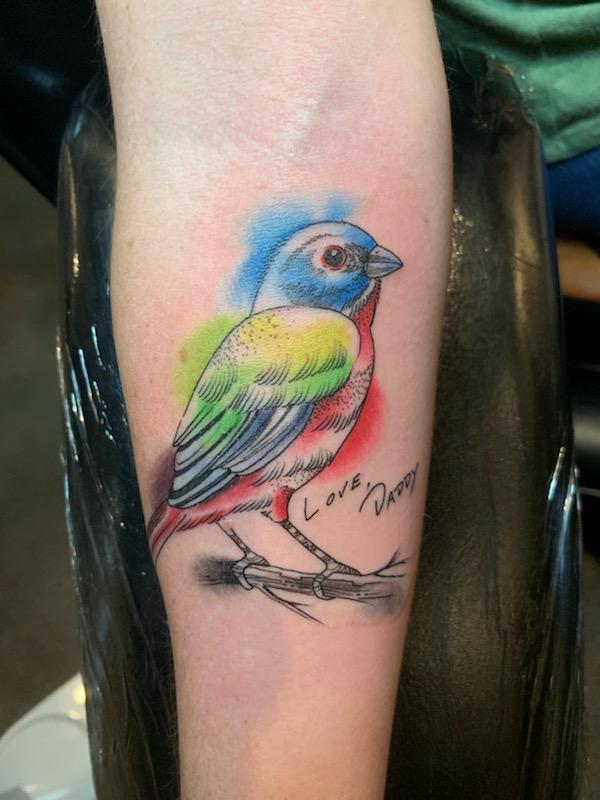 A huge thank you to Adam Bartley at Elite Ink Tattoo in Myrtle Beach, SC.  He designed this tattoo with very minimal direction from me, and somehow perfectly understood – and executed – my vision. And he didn’t bat an eye when I choked back tears asking him to include my Dad’s handwriting.

Previous Post: « 2019 Georgia Death Race Recap
Next Post: Have You Tried Turning it Off and On Again? »