Here’s some rambling truth for you:

I’ve never fully trained for a marathon.  Or even a half marathon, really.  I assure you that I am not boasting, bragging, nor proud of this fact.  If anything, as a runner and fitness professional, I’m sort of ashamed.   With 7 full marathons and 18 ish(? I’ve lost count) half marathons under my belt, I’ve pretty much shuffled my way to the finish line on sheer luck and good genetics, I suppose. 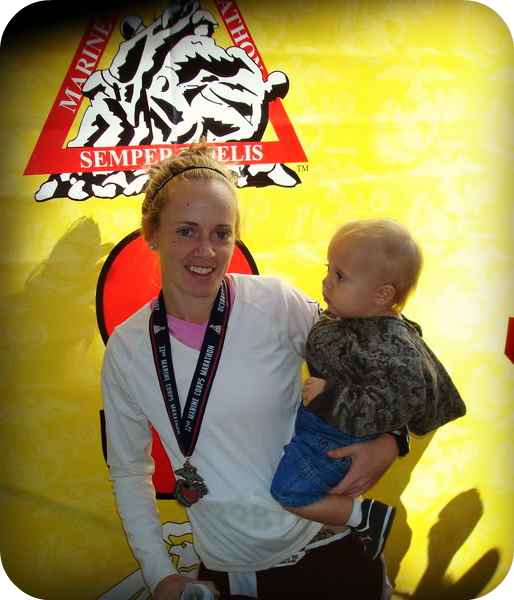 Rowen and I, post Marine Corps Marathon, 2007, my very first full. We were both babies <3

I’m not exactly sure why I have such a hard time with training, though I can give you a million excuses: kids, school, work, weather, attention span, just to name a few.   You know, the usual suspects of the “why I don’t have time for ________” case: life is too chaotic.

Or at least, that’s what I always assumed the reason was.

As of today, it has been 2 years, 8 months, 1 week, and 1 day since my last official full marathon, the 2011 Umstead Trail Marathon. (This doesn’t count the 2012 Spartan Ultra Beast, #7 in the books. I technically covered 26+ miles, however, this was hardly a marathon in the traditional sense. It was much, much worse than that).   Those of you that have stuck with me since the Run Faster, Mommy! days  know that my running has taken a few drastic turns over the years.   I’ve gone from a strict road runner to a cross training junkie, to an obstacle course racing devotee.  And now that the cold weather has settled back in, and Runner’s World was kind enough to send me away from what I’m going to now refer to as a “runningmoon” (as it totally re-lit the spark for my love of strictly running), I find myself giddy over the prospect of possibly running another marathon in the near future.

Except this time, and perhaps for the first time in my entire life, I didn’t immediately find a race to register for, nor did I dutifully print up a training plan, exclaiming to the world that THIS TIME I would cross off every single workout!  In fact, my 2014 race calendar is still 100% completely blank.  Instead, I’ve decided that if I’m ever going to be a decent long distance runner, I should start actually gaining the discipline to consistently put in long distance runs.

Also: not the sort of rocket science you need a degree, or even a coaching certification, to figure out.

So instead I’ve just been running. Here, there, and everywhere; a long run on the weekends, 3-4 shorter runs during the week, one of them some sort of tempo or speed work.  There is no specific training plan I’m following, and as a result there is no sort of guilt I feel if I miss a workout.  I am strength training 6-7 days a week in the gym, with zero guilt as to how this may be affecting my running workouts (a hilarious concept that so many runners worry about, as in the end it only contributes to my running).  Further, and even more importantly, there is ZERO pressure on me to do ANY running workouts.  I don’t have to run 11 miles at marathon pace on Saturday or a  4 mile tempo run at a 10K pace on Tuesday because the training plan says I have to. I run whenever I want, however fast I want, and as far as I want…because I want to.

And as a result, I’m really enjoying my time spent running, which in turn is helping me become a better runner.  I feel stronger. I feel faster. I feel healthier. I feel HAPPY.

Now, life is very different.  The boys are getting older, I’m no longer in school, I set most of my own work hours.  Marathon training, in theory, should be easier to execute.  But still, I’m finding myself simply, and finally, enjoying running for the sake of running.   Again, not that I haven’t enjoyed running in the past.  I wouldn’t have started this blog nor put so much time, effort, and finances into racing if I didn’t enjoy running.  But right now, I’m enjoying JUST RUNNING.

And it’s kind of awesome.

I’m realizing that it wasn’t necessarily my busy schedule or hectic life that prevented me from successfully training in the past.   It was the fact that I never truly learned to appreciate just running.  No medals, no finish lines, no time goals, no distances. JUST RUNNING.  In fact, looking back on my history of running, I jumped into racing within months.  I ran my first full marathon 10 months after I started running.  The second one two months after that.  Then came another baby, then the next 4 marathons right in a row.  Scattered among all of that were countless shorter distances, and even triathlon training.   There was always a training plan,  there was always a workout that HAD to get done, and there was never JUST RUNNING.

I dream of one day running a sub 4 hour marathon.  Then a Boston Qualifying time (currently a 3:35 or faster for me.) I dream of one day crossing the finish line of a 50 miler, and dare I even say it…a 100 miler.   When I used to dream of these accomplishments, it was always in the “I need to do this NOW” sort of way (FOMO, anyone?).   But these days, I find myself picturing those finishes in a much different light.  I picture crossing those finish lines knowing I fought hard for that goal, I didn’t simply luck out with my stubbornness and long legs once again.  I want to cross those finish lines knowing not only that I left everything out on the course, but I also put everything I had into the journey of getting to the race in the first place.

But most of all, I picture myself running for years, and even decades, to come.   Running has given me so much.  And despite what the contradicting motivational posters might say, in my case, running has also taken a lot from me.   But at the end of the day, it has become so much of who I am and what I do. I am a runner, and I hope to always be a runner.  And there will certainly be more bad times to come, but in the end I want the good to far outweigh the bad.   And in order to ensure all of this, I must foster a healthy relationship with running.  One that encompasses respecting the distance and respecting my body, not simply playing a game of Russian Roulette with races and injuries.

So while I have my eye on some races in the upcoming year, I’m setting nothing in stone.  For now,  I will allow myself to finally enjoy running with no rhyme or reason.

For now, I will just run. 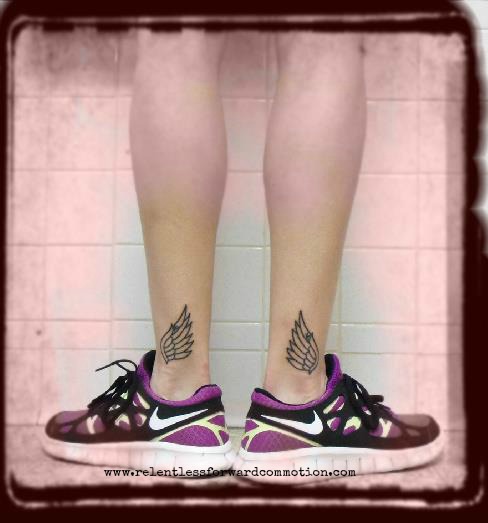 My tattoos, (fresh from the shop so looking rough around the edges), after my 2012 half PR. They mean as much to me today as they did then…

« The Chronicles of Sitting.
Wii U Fit Meter Review »

When you were little, chances are your mom was always hounding you to "go outside and play". Little did you know, she was doing more than just trying to get you out of her hair - she was helping you stay healthy. As adults, we seek alternate ways to enjoy the outdoors that differ from the … END_OF_DOCUMENT_TOKEN_TO_BE_REPLACED

The older I get, the more I truly believe that the Universe has a way of frequently working things out, if you're open to it. It might not be what you expected, or wanted, but nevertheless it will be a happy ending. A classic case of the Rolling Stone's "you can't always get what you want, but if … END_OF_DOCUMENT_TOKEN_TO_BE_REPLACED

Runners are always hunting for the best and most effective way to recover from hard workouts and races. And who can blame them? The ability to recover quickly means athletes can continue training hard, which in theory, means progression to becoming a faster, stronger runner. Naturally, when a … END_OF_DOCUMENT_TOKEN_TO_BE_REPLACED