I’ve been trying to write a blog post for the last week. Nothing but whining has come out of my brain and through my fingers to this computer screen, and quite frankly I was annoying myself with the “woe is me” attitude. So none of the posts made it to see the light of the blog world. But to sum each and everyone up for you: I’m injured. It sucks. I’ve got 3 more weeks on the “absolutely no running” bandwagon, and I feel defeated. There goes Chicago marathon and my dreams of a PR. Who knows if I’m going to even make it through Irongirl. Blah blah blah, cry me a river. (in case you missed the epic fire-leaping-torn-ankle story, you can read it here)

Today, while perusing facebook during the kids nap time, I came across this article, and more importantly, this picture: 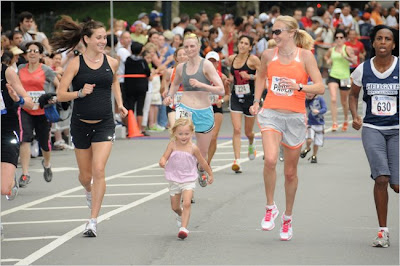 I’m sure most of you recognize those two right off the bat, but just in case you can’t tell or don’t know, that’s Kara Goucher in black and Paula Radcliffe in orange, both highly decorated distance runners (both mid and long distance) . And as you can probably tell by those peeking bellies, both are 5 months pregnant (Kara with her first child, Paula with her second…that’s her first daughter Isla in between the two ladies). And crazy enough, they are both due on the exact same day in September. Almost seems like Nike planned that or something, right?

So if you didn’t read the link, the story goes a little something like this: Paula ran the New York mini 10k this weekend for “fun”. Kara didn’t run due to an injury, but met her at the finish, along with little Isla. According to the article, Paula ran with a giant smile on her face, and encouraged all of the runners around her along the entire course.

That, my friends, totally kicks ass.

You often hear of professional athletes sitting out of sporting events if they aren’t at their peak, or DNF’ing races if they know they have no chance of winning. I have mixed views on the latter of those situations, but bottom line, I understand why they do it. But now, here’s Paula. Running in a HUGE race, simply for fun. No time expectations, nothing but a smile on her face. She finished in 44 minutes and 36 seconds, almost 15 minutes behind the winner. Yes, my jaw still initially dropped, her “slow” 10k is still 8 minutes faster than my fastest ever 10k, and she’s 5 months pregnant. But then again, she IS Paula Radcliffe, and I’m just Heather the crazy running mama.

But I digress. While I’m going to assume it’s probably safe to say Paula and Kara’s babies-on-board were probably well thought out and planned around training and racing seasons, unlike my surprise bum ankle, it’s nice to see them both taking this “time out” of sorts with smiles on their faces. Now sure, their weekly mileage at 5 months pregnant is STILL be more than my highest week ever, but that’s not my point. My point is, they are running at “less than their best”, and they seem very happy to be doing so.

I’m sure you are wondering, where the heck is she going with this? I swear I have a point. You see, I still have 3 weeks until I can get out there and even attempt to run again. And by that I don’t mean hop right back on the mileage band wagon. I haven’t even been able to aqua jog, as the movement of my ankle in the water hurts too much. So in 3 weeks, I can start SLOWLY getting back out there and building up some mileage. 3 weeks from now puts me 14 weeks out from the Chicago Marathon.

My most immediate thoughts after I realized I really do have to sit out for a month and a half was “well there goes Chicago”. Up until this morning I was thinking the same thing. Not because I can’t safely build up a good 18-20 miles in 14 weeks, but because I thought “there is NO WAY I’m going to rehab and then still be able to PR in 14 weeks”. I’ve been totally distraught about this. Distraught and pissed off. So much so that I’ve avoided my training log AND my coach for a good week and a half now. I just didn’t know what to do. If I can’t finally PR, if I can’t finally put in a good 20 weeks of thorough training, why even bother? 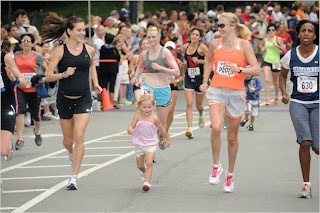 And then, as cliche as it sounds, seeing this picture this afternoon reminded me why I should bother. I’ll bother to show up at the Chicago Marathon starting line, because good, bad, fast, or slow, at my peak or at my worst, I AM a runner. No I’m probably not going to PR. Lord knows I’m not going to win, heck I probably wouldn’t even beat Paula in a 5k while she’s in labor. But while we should always strive to be our best, to better ourselves, and beat our PR’s, at the end of the day, what REALLY matters? The fact that I LOVE this sport, that’s what matters.

Thank you Kara and Paula. Thank you for being amazing role models for the rest of us running mamas. Thank you for reminding me that we aren’t always going to be on top of our game. And that injuries (or babies) happen to all of us at some point or another. Do we give up? No. We just make the best of the situation and keep moving forward, with a big smile on our face.