Those of you that have followed my journey over the last year know that it’s been a crazy one,  and know that every now and then, I have to post something well out of the running/crazy athlete theme I’ve got going around here.   Typically, these posts step well past the boundaries of over sharing (airing dirty laundry, if you will.)  But the truth is, life isn’t easy. It’s not always rainbows and happy mud runs and glorious finish lines with painless burpees.  Nope, sometimes life downright sucks and feels unfair.  But I share my struggles & emotions, because a) running is cheaper than therapy, but since I’m sick, writing will have to do, and b) if one single person out there reads my ramblings and thinks “hey, glad to know I’m not alone in feeling this way”, then it has been worth it for me to share.  So, here goes nothing…

As with most things in life, I believe I’m an outlier. I never fall into a specific category, ever, unless of course the category is “Heather Gannoe”.  I am me, I am unique, and I tend to be comparable to a whirling tornado of chaos.  So I don’t believe that I could ever be pegged into one of those “personality type” categories.  Often times, I’m mega care-free. Actually, to a fault. I procrastinate with the best of them.  I start a bajillion projects and hobbies and never follow through with most because I’m often distracted by something new.   I often skip over the simplest, yet mundane tasks because I’m too busy doing something wildly ridiculous and unimportant. I love life, and the “free bird” side of me often gets me in trouble.

And then there is that pesky “type A” that rears it’s obnoxious head from time to time.  The complete antithesis of the rest of my life.

For example, I am a horrible passenger in a car because I hate not being in control.  There are few people that I can truly relax and let drive. Everyone else tends to freak me out (sorry, don’t take it personally).  I sit in the passengers seat and over analyze EVERYTHING.  Are they paying attention? Do they see that car slowing down up a head?  They really should slow down more in this turn.  You get the idea.

So as you can imagine, replace “car” with “my kids”, and watch what a control freak I become.

Last time I checked I am not a hermaphroditic snail,  so clearly it took more than just me to bring these rugrats into the world.   Perhaps it’s a character flaw as a mom , or a survival instinct, or just sheer stubbornness, but I tend to believe I and I alone know what’s best, ALWAYS.  And obviously, I tend to forget that someone else (a.k.a. their dad) has 50% vested interest in these little monsters.   And when said other person doesn’t do what I would do in a situation involving our kids, or say what I would say to them, I have a really hard time remembering that even though *I* don’t think it’s right, he still has their best interest at heart.

At least I hope.

My oldest started Kindergarten this morning.  He started down here in South Carolina, temporarily living in his dads house.  It is a decision that I haven’t talked much about, but in the long run, I know will be best for all 4 of us.  As much as the competitive side of me hates to admit it, Dad’s got the one up in this situation. A beautiful, large home.  A job he’s been at for years.  I’m the one who is still trying desperately to wrap her head around the fact that she’s 30, not 18, and trying to establish a career and settle down (refer to paragraph #2).  Regardless, it’s not about me, it’s not about him, it’s not about what happened between us,  it’s about our kids.  And in this day and age, when BOTH parents want to be a part of the kids life, you have to take advantage of that opportunity. Kids need their moms….and kids need their dads.  I hate to use the word “need” because I certainly understand and have witnessed situations when a parent is actually a bad influence on the children.   Or a single parent who did an amazing job raising children solo.  But when the opportunity for both parents to raise their kids is there…embrace it.

Point being, even though I was there for this really big moment in the little dude’s life, I really, REALLY struggled this morning with not being the one in charge. 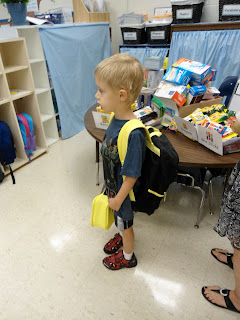 So as you can imagine, I was *that* mom at the elementary school this morning.  Yes, the crier.  Granted, having this horrible cold doesn’t help, but I was puffy faced, teary red eyes before we even left the driveway.   Crying because my first born is all grown up (well, Kindergarten, same thing at this point).  Crying because I had no control over that day. Hell crying because I never imagined that *this* is how my life would be playing out. I always imagined my future would be the things 1950’s good housekeeping articles were made of.  OK maybe not, I don’t think I’ve ever worn an apron anyway, but you get what I’m saying.  No one ever wants things to fail.    No one ever leaves the hospital with a brand new perfect baby thinking that when they start Kindergarten in almost 6 years, you would be that family.  The one where you can cut the tension between the mom and dad with a knife.  The one where people tiptoe around introductions to not have to get into the messy details. The words “blended family” never crossed my mind…until it happened to us.    Don’t get me wrong,  I am so much happier today than I was a year ago this time.  I do not regret a thing, and I would not trade where I am now for anything.  But it doesn’t change the fact that I never imagined this is how our lives would be, and sometimes, that’s a damn hard pill to swallow.  And I never imagine that when it came to my kids,  *I* would be the one who had to let go of the reigns, this time.

The irony is that this little guy is his OWN person.  Sure, we are his parents and we are the ones in charge of making sure he grows up in a safe environment.  But ultimately no one owns him. He is his own. As we pass the torch of his day time well being  between the hours of 7:30 am to 2:30 pm on to the public school district,  he will begin to make his own decisions.   The hardest part of parenting for me has been the letting go.  Letting go of all that happened and doing what’s right for the boys, not what’s right for just me.   Letting go of the idea that I am always right (because heaven knows that’s far from the truth).

I hope in doing so, I’m teaching my boys a very important lesson.  To be honest, I’m sitting here trying to figure out exactly what that important lesson is, but I’m coming up empty.    Which gives me no way to finish off this blog post with an intelligent point or moral of the story.  So I’ll just say this…