It has never been a secret that I’m a chronic internet over-sharer.  From heart ache, to life altering events,  bodily functions that would certainly be classified as “too much information”,  contemplation over the merits of toe socks, pictures of me doing the most mundane tasks like foam rolling or cooking the culinary masterpiece that is Jiffy Pop…it’s all out there.    This business of sharing my business has made me a little numb to the reality of the world outside of social media.   It has caused me to subconsciously assume that everyone else also plasters their daily to do list, frustrations, and accomplishments, no matter how big or small, on their Facebook wall or blog feed for the world to see.

When in reality…the true reality outside of iPhones and instagram…while I, and many of my social media cohorts drone on and on about the most mediocre events of our day like it is headline news, there are people quietly doing truly extraordinary things.    This of course, is not ground breaking news, and instead is a blatant case of “first world problems”.  Our society has become incredibly self absorbed (selfies, anyone?) and I am certainly no exception.

Let’s get to the point. 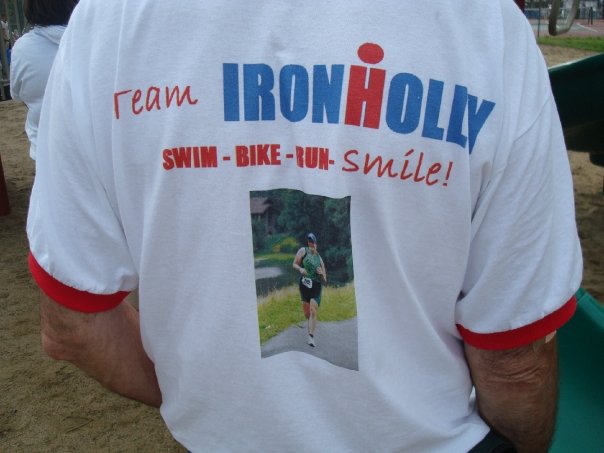 There is this amazing woman in my life.  You may have heard me mention her a time or two…or two hundred.   My sister Holly.  The one who introduced me to running in the first place.  The one who ran by my side during my first race, and who laughed her ass off at me when I spit my first GU all over myself (I seriously didn’t expect how gross it would taste).  The one who inspired me with her blog to start a blog of my own.   The one whose inspiration led to my first piece of writing that was published in a book.  The one who dropped everything to come and literally rescue me from rock bottom not once, but twice, and has never ever asked for anything in return, though we could all agree that I still owe her big time.    A cancer survivor who humbly started a fantastic organization for other survivors.  A woman who, in the same year as planning her wedding, trained for her first Ironman.   Unfortunately, she was pulled from that Ironman for medical reasons, and after a year of training, earned a DNF.  But instead of throwing herself a pity party or making excuses as so many of us would, she hopped back on the training wagon, and 3 months later, FINISHED an Ironman.

(Rare in these parts, but in case there is anyone reading who is unfamiliar with the Ironman race, it consists of a 2.4 mile swim, a 112 mile bike ride, and a 26.2 mile run, all in 17 hours or less. To say that is no small feat is an understatement)

Back to my initial point.

In the back of my mind I knew Holly was training for another Ironman.   I saw the occasional update on a long swim, I saw the pictures of her new bike, and each time I would think “oh yeah, that’s right, Ironman training”.    But I had articles to write, and blogs to post, and statuses to update pertaining to the latest shenanigans one of the cats pulled.   Absorbed in my world, my doings, my needs, and all along, I was relatively oblivious to the amazing feat my sister was quietly working towards.

Now, before this post begins to air a different tone than I had intended it to, let me stop and clarify.  This isn’t supposed to be a “woe is me (or shall I say “what a selfish jerk I am”) kind of post.  Yes, I’ve been oblivious to much of the rest of the world.  Many of us are.    In our society, it is the norm for the majority of us to be completely self absorbed.  Between ridiculously overbooked schedules, tending to our own families, and frankly, minding our own business, the selfishness simply happens.    So while I am apologizing for my egocentrism, I’m also recognizing that it simply happens.

Instead…I’m urging everyone(and myself) to stop for a few minutes everyday, and take in the greatness that occurs around us ALL OF THE TIME, the greatness that so many people quietly, humbly carry out.  In fact, just this morning, I found out that a friend from back in Myrtle Beach is also competing in Ironman Florida this weekend. I had no idea.   I remember when she and I first got our bikes, and spent afternoons tooling around my neighborhood, trying to figure out how the gears worked, and desperately trying to not fall off the bikes.  And now tomorrow she is racing an IRONMAN.    I want to jump up and down shouting and ringing the cowbell that sits next to my desk out of excitement for her, but I wont, for fear of the ornery downstairs neighbor.   So instead I’m writing this blog post to tell you that I think you kick ass.

Now I know a 140.6 mile triathlon isn’t worthy of a Nobel peace prize, and I know there are plenty of people doing amazing, remarkable things every single day that might be more notable to the human race as a whole.  But in my world as an endurance athlete, seeing everyday people train their hearts out for such an extraordinary feat makes my heart swell.

I’m so proud of you Holly.  I’m so proud of you Dawn.  I’m so proud of each and every one of you who set your heart and mind on an extraordinary feat, not for bragging rights, not for facebook photos, but simply because you know deep down inside that you are greater than any obstacle that could ever try and stop you.  People who realize that life is an amazing gift, and aren’t afraid to reach for and pursue their dreams NOW.   People like you inspire ME to be a better, stronger person.

(note: I truly wish this video below had a better thumbnail.  This one is scary and concerning, haha. But trust me when I tell you it is an awesome video)