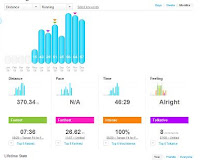 This year, I raced:
2 full marathons
2 half marathons
5-5k’s.
And my training mileage? Let’s say it’s not NEARLY in the ballpark of where it should be for having run 2 full marathons this year. (daily mile to the right isn’t correct, I did, at least, run more than 370 miles!)
oops.
I’m not one for excuses but this time I’ll cut myself some slack by pulling the “getting used to a new baby AND two year old, work, and college full time” card.
This excuse expires at 11:59 p.m. on December 31st, 2009.
I am in total awe of people who train for ultra marathons. My friend Tara is currently training for the Rocky Racoon 100 mile race in February. 100 miles in one race. I can’t wrap my mind around that idea, nevermind around the fact that she is currently running 90 mile training weeks, while taking care of her kids. While I don’t aspire to run a 90 mile week, nevermind an ultra, anytime soon (I won’t say never, those ladies are awfully inspiring and their insanity tends to wear off on others…), I would like to increase my mileage in 2010 to be, if nothing else, more consistant.
In a previous post, I made my resolution to take 2010 in stride when it comes to my running, and enjoy whatever challenges are thrown my way without burning myself out. And that resolution still stands, and can still stand while I reach for some super fun goals. So here they are!
-Mileage:
Goal A (the reasonable, attainable goal): 2010 km (that’s 1248.96 miles) in 2010
Goal B (still attainable, but don’t kill myself trying goal) 2010 miles (that’s still 2010 miles) in 2010
– GET IN THE POOL!! (sent my email!)
-GET ON THE BIKE!!
-exceed my goal of raising $1,000 for the Ulman Cancer Fund through TEAM FIGHT!
So, to sum up the 2010 goals…. TRAIN, Heather, TRAIN!!
Anyone want to share their total mileage for 2009 (as of today?)

« Jersey Turnpike musings-a.k.a. "I can’t feel my butt"
Do they make cheese flavored GU to go with this WHINE? »

About a decade ago, I was a happy road runner, traversing the paved streets of major cities while collecting new half and full marathon finishers medals. I remember thinking that a race had outdone themselves when I'd show up to an aid station, and in addition to water and Gatorade, they had … END_OF_DOCUMENT_TOKEN_TO_BE_REPLACED

When you were little, chances are your mom was always hounding you to "go outside and play". Little did you know, she was doing more than just trying to get you out of her hair - she was helping you stay healthy. As adults, we seek alternate ways to enjoy the outdoors that differ from the … END_OF_DOCUMENT_TOKEN_TO_BE_REPLACED

The older I get, the more I truly believe that the Universe has a way of frequently working things out, if you're open to it. It might not be what you expected, or wanted, but nevertheless it will be a happy ending. A classic case of the Rolling Stone's "you can't always get what you want, but if … END_OF_DOCUMENT_TOKEN_TO_BE_REPLACED