Remember back at the beginning of the year when I vowed to keep track of my running mileage as my new years resolution?

It has proven to be more of a novelty than a necessity, and thus my tracking of the miles has gone the way of most New Years Resolutions…nowhere.

I can’t say that I’m upset about it.  As I’ve written on this very blog numerous times before, my running has evolved over the last few years from something that was often a source of stress and frustration, to one of the greatest sources of (non human) joy in my life.   I’ve always joked and said I’ll never drink too much tequila because I never want a reason to dislike it, and I’ve come to feel the same way about running.

So, I’ve stopped tracking my mileage, because it doesn’t matter…at least for right now.

That said, I can say without a doubt that June and July have proven to be the highest mileage miles of the year thus far.  Part of the reason is because Geoff and I find ourselves at home at the same time far more often than we used to in Vermont, and more often than not look at each other and say “Hey, what do you want to do? I dunno, what do you want to do? Let’s go for a run!”   The other reason is because the local running club here in Myrtle Beach is incredibly active, making it kind of irresistible to NOT go and run with them when they are putting on all of these great events.

Case in point: yesterday’s Battle of the Border.

I’m not quite sure exactly how the lighthearted (I think) rivalry began, but every year for the last couple of years, the Grand Strand Running Club (South Carolina) and the Wilmington Road Runners Club (North Carolina) meet at a farm that is on the SC/NC border, and run a cross country style race to determine who is the fastest team on the border.

Of course Geoff and I weren’t going to miss an opportunity to a) run with the team, and b) run OFF of the pavement.  So Saturday morning, we headed up to Indigo Farms in Calabash, NC, ready to run.

After checking in I did my obligatory visiting to all of the farmyard animals. I figured I should get this over prerace, because it wouldn’t really help my team to stop mid race to take pictures of the pigs and talk to the goats.

Our club was amazing enough to provide free Asics singlets to everyone on the team who showed up to represent the team…and just shy of 90 people showed up. 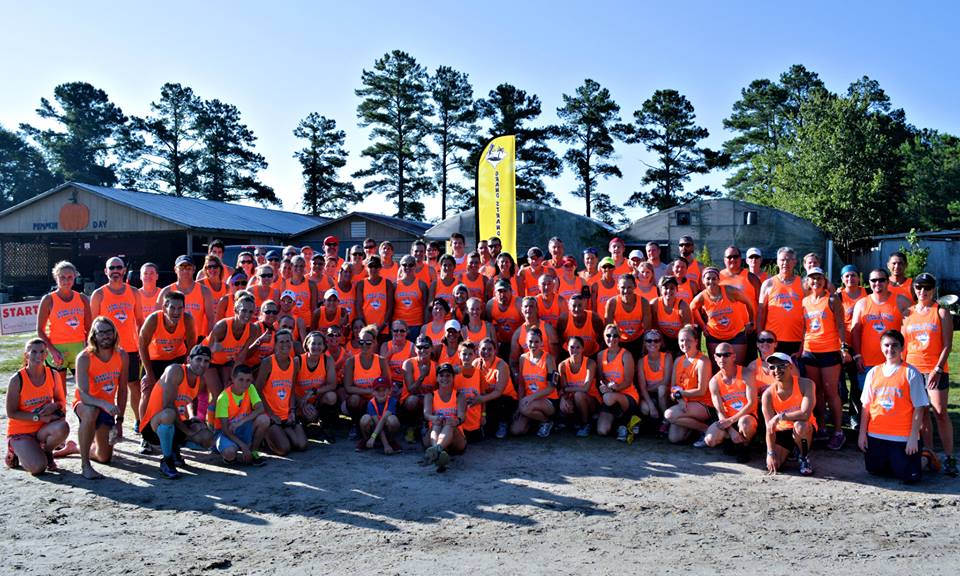 It was a sea of neon orange.

While waiting for the start, we had a hilarious conversation with a fellow teammate who had just moved to SC from New York a few months ago.  “Don’t these people need water?!!?” she exclaimed, nothing that the three of us seemed to be the only ones prepared to bring water with us on the course (I was wearing a hydration pack).  “They are a bunch of camels, or something” I retorted, secretly jealous of the fact that the rest of the team was well acclimated to this heat. The temperature was already well into the 80’s, and quickly climbing.

After some instruction, a pep talk that essentially consisted of “you don’t have to run fast, just have to beat SOMEBODY on the other team”, and a team cheer, we lined up to tackle the 4 + mile off road course. 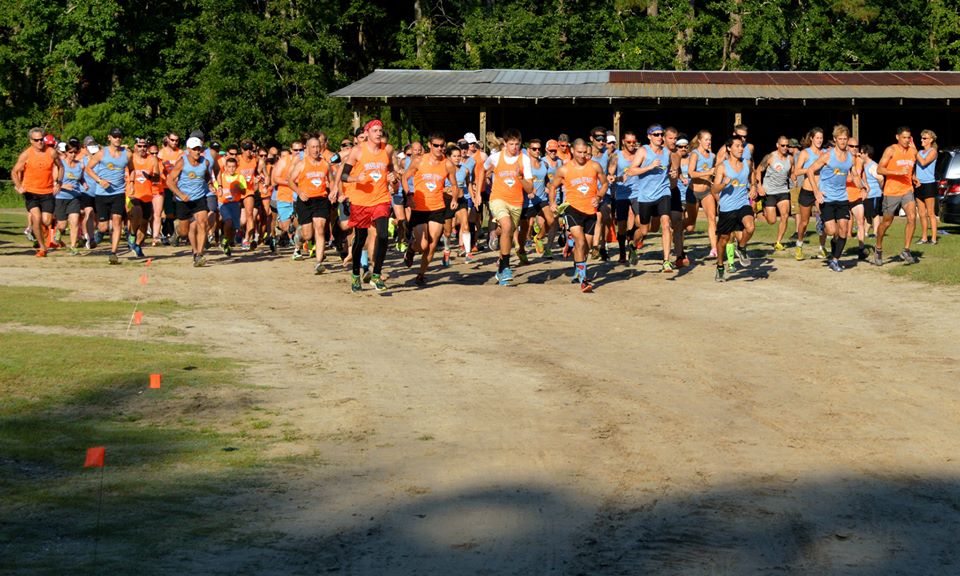 I call it an “off road” course because it wasn’t on pavement…but it wasn’t really a “trail” either.  It was a combination of dirt roads and mowed paths in large fields.   Which still beats pavement, so I’ll take it.

I have absolutely zero idea of how fast I’m running.  Probably too fast.  No, scratch that…after last week’s prediction run, I’ve learned that what I *think* is fast in this weather isn’t at all, it just kicks my butt.   I’m probably running slow.  Good  I got as far as charging my GPS the night before, but too bad I forgot to actually wear it.

(Unlike many of my teammates.  How hilariously awesome is this picture from the start?) 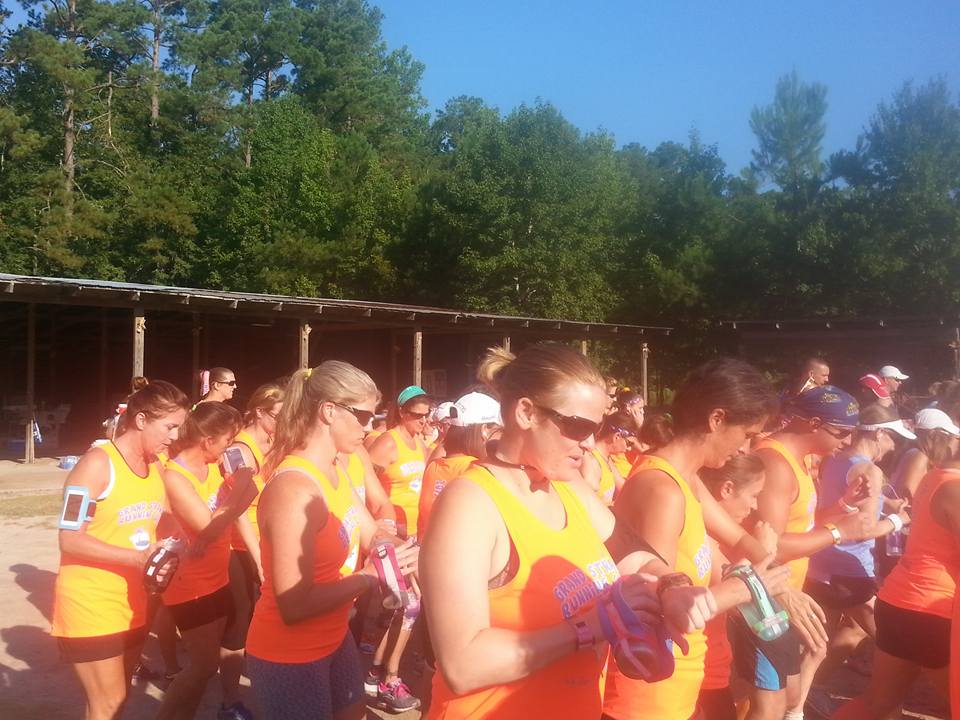 The start of a race or a carefully choreographed watch/dance routine? Photo credit: Tasha Mariah Litton

The heat.  The humidity.  This might suck a little bit.

SHADE! DIRT ROADS!  Put that damn smile back on your face and pass people!

Maybe you should slow down a little.

Smile again at all of the people ahead of you passing you in the out and back section.  Suck it up when they yell “KICK IT UP A NOTCH HEATHER, THESE ARE TRAILS, YOU LOVE TRAILS!”

I love trails. I really do.  Are these trails?  Yes.  Sort of . Close enough.  What’s with the semantics Heather?  Just enjoy yourself. I do love this. But I fear this heat might kill me. 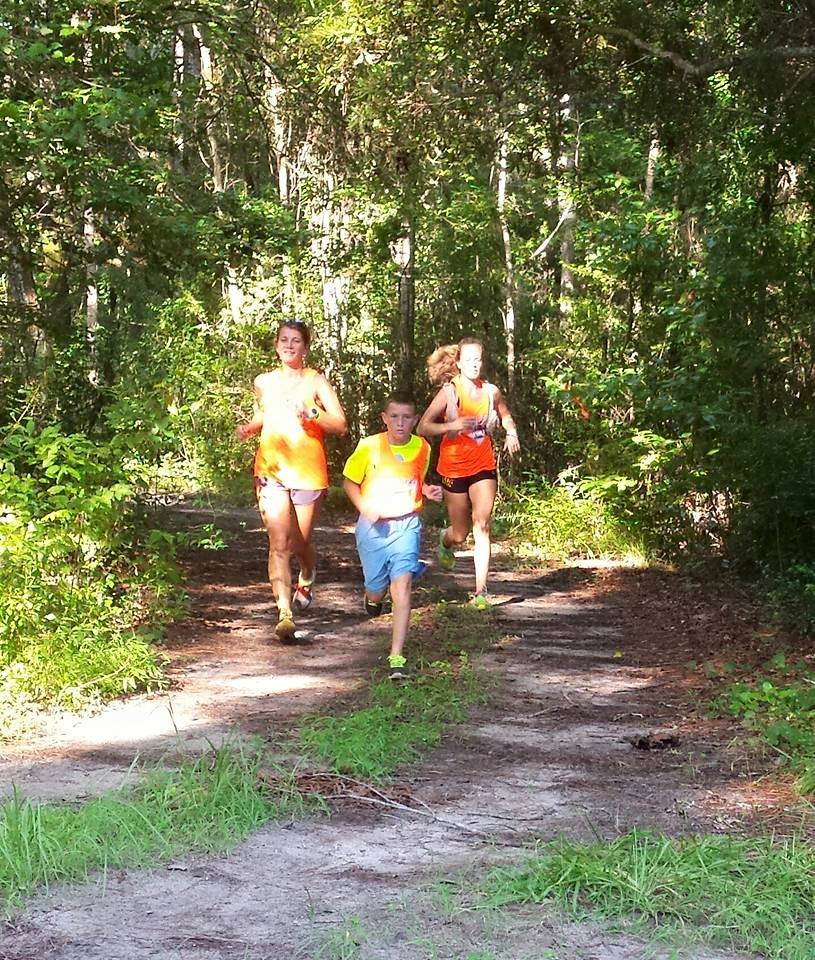 Run, run, run a little slower.   The shuffle helps prevent ankle turns on the hidden holes and divots in the grass.

“Do you know the mileage here?” I yell to two volunteers at an intersection.  “4 miles, I think?” a woman yells back.

I feel elated for all of 3 seconds, thinking the finish line must be near,  before I spend the next minute wondering if they knew I was asking them what mileage we were at right at that very location or if they thought I was asking them how long the race was, in total?

This is embarrassing.  I’m WALKING during a 4 miler.  But I’m also dizzy.  Does this Summer in the South running EVER get easier? I mean everyone else seems fine…

Sprint strong and keep a straight face, you know, like this wasn’t the worst race you’ve had in a very, very long time 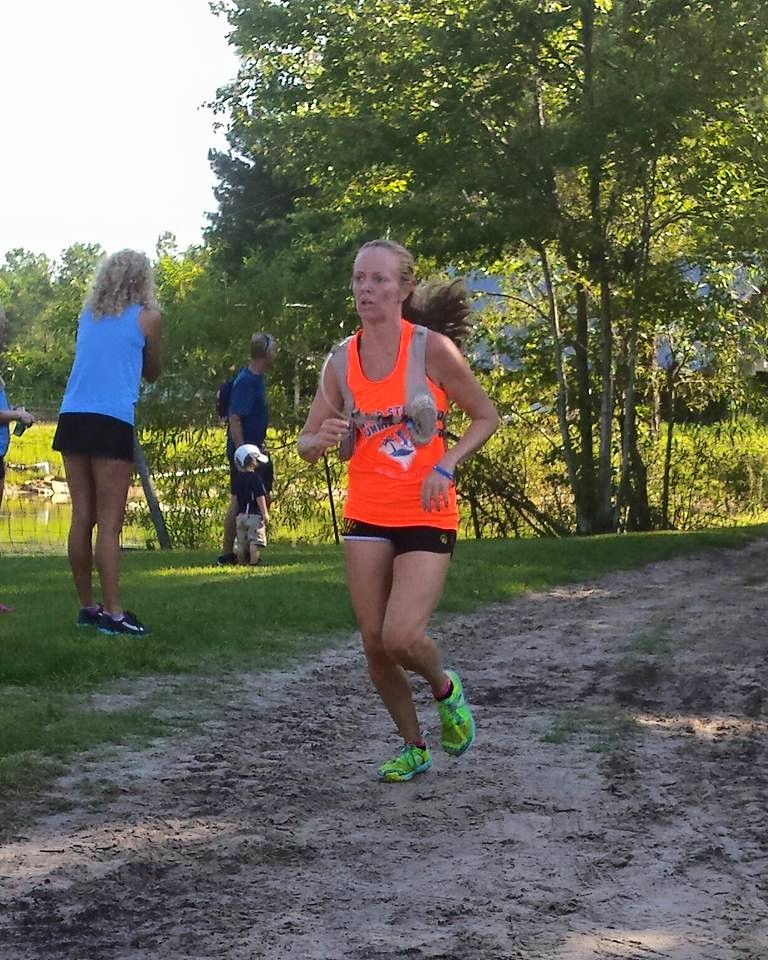 Yeah I’m not fooling anyone. That face and posture totally screams “this really hurt.”

35:40 to run 4.2 (ish) miles.  8:3-something/minute miles.  They felt like 6:00/minute miles.  I simultaneously remind myself of that picture circulating facebook that assures me I can add 2-3 minutes per mile to my pace in this type of heat and humidity, and I also scolded myself for my normal “easy” pace feeling so damn hard. 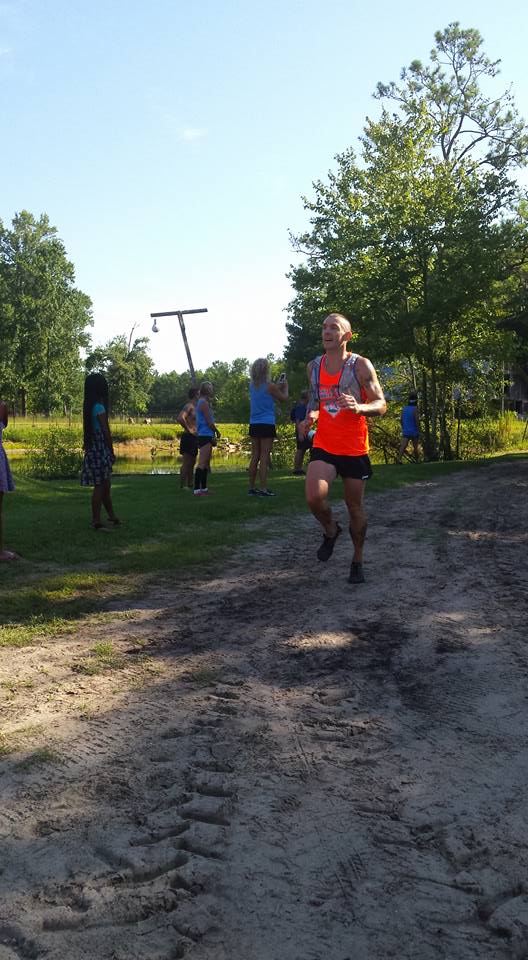 This heat and humidity is so freaking humbling.

But…I  keep reminding myself that running through these summer months WILL pay off.

Right.    And besides, a bad day of running still beats a good day of  (insert anything not nearly as fun as running here).

A HUGE thank you to GSRC & WRRC for a fun, albeit hot,  morning. 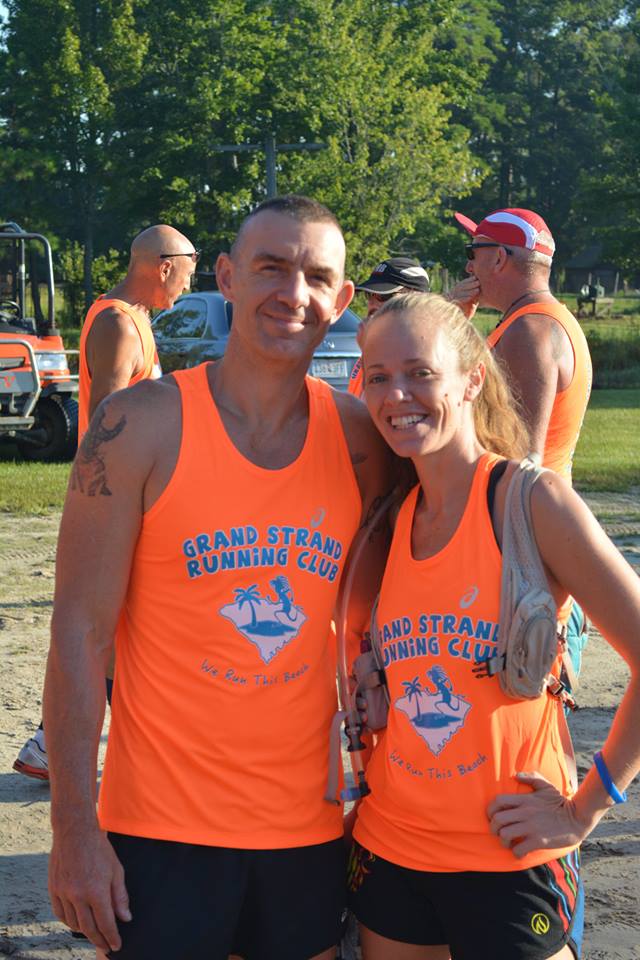 Oh, and for those keeping score, WWRC won the battle…this time.