I’ve often pondered putting this under the “related skills” section of any and every job application I’ve ever filled out. “Not sitting still” has been complimented skill set of mine since my very first job when I was 15 years old. While I do always strive to be a good employee, the reality is I would rather do ANYTHING other than sit behind a counter or desk and watch the time tick by, so I get stuff done instead.  It meshes well with the “we don’t pay you to sit around” mindset of most employers.   Frankly, you’d probably have to pay me double to sit around.

Not surprisingly, this “not sitting still” carries over to most aspects of my life, and is probably a driving factor behind the fact that I chose a career in fitness.  I love to move my body. I’m guilty of walking too fast everywhere I go, and frolicking or skipping in places that a grown woman probably shouldn’t, like the grocery store.    Fortunately, and perhaps unfortunately, there seems to be some sort of correlation between movement and desire to sit:  the more I move, the less I want to sit.  You would think it would work the other way around: the more I move the more energy I burn, and the more likely I am to relax; but unfortunately it doesn’t work that way.

Sometimes I like to write really long blog posts about nothing at all to see if anyone actually reads them.

Now, with such chaos comes responsibility, for even the most energetic of bodies are still susceptible to a crash and burn.  Since the first of the year, I have only taken a handful of rest days. I have, however, been very careful to schedule my workouts to include many easy days.  In the past, I’ve done my fair share of taking on way more than my body can handle which only ever led to burnout and injury.  Nobody wants that.   Long gone are the days where I put more value than is necessary on numbers,  trying to keep up with what others are doing, or worrying that people won’t think I’m a “real runner” if I don’t put in X number of miles a week.   I don’t care if I have a 200 mile month or a 15 mile month; I only care that I feel good.

For the past 55 days or so I have felt AMAZING.

And then I got sick.

Really, I had it coming.  As a child, I was plagued with back to back cases of strep throat, bronchitis, tonsillitis, you name it, every single winter, without fail. I visited the doctors office monthly if not more, and had a near constant stream of antibiotics running through me from October through April. I honestly cannot remember a Christmas as a child where I wasn’t sick.   Of course it got better as I got older, but I was still plagued with at least one or two evil winter viruses every year.   So to have gone this entire winter without a single cold was amazing to me; so amazing that I started bragging.   Subtly of course, as a “hey, I haven’t had a single cold this year” declaration to Geoff.  Still, it was enough for the cold karma to catch up with  me.

Sunday morning I awoke at a friends cabin on a lake somewhere in the middle of nowhere, New Hampshire, with a runny nose.   I assumed it was because we were in a cabin, and it was cold.   But the runny nose soon progressed to a cough and a headache, and before I knew it I was sitting on the floor of the “cold and allergy” aisle of our local Rite Aid trying to decide which of the hundreds of boxes of pills were the appropriate cure for my list of ailments.  Yes, sitting. I was that overwhelmed and most of what I needed was on the bottom or second to bottom shelf anyway, which didn’t mesh well with the newly disoriented feeling I was experiencing thanks to clogged sinuses.

It’s snowing again. Is anyone surprised?

I finally settled upon some sort of daytime/nighttime generic Sudafed product, of which the daytime version did absolutely nothing to relieve my symptoms, yet the nighttime version knocked me out cold. In fact, the next morning I awoke, startled that I slept throughout the entire night, and declared that it was the first time that has happened in over 8 years. I did not wake up ONCE.  It was so glorious that I decided right then and there that the BEST thing I could do for this cold was to rest.  And so rest I did.

But now we are on day number five of “resting” and I’m about to lose my ever loving mind.  Or I was, until I got the mail.

As if the Universe sensed my frustration, the timing of the arrival of my new business cards was near perfect. 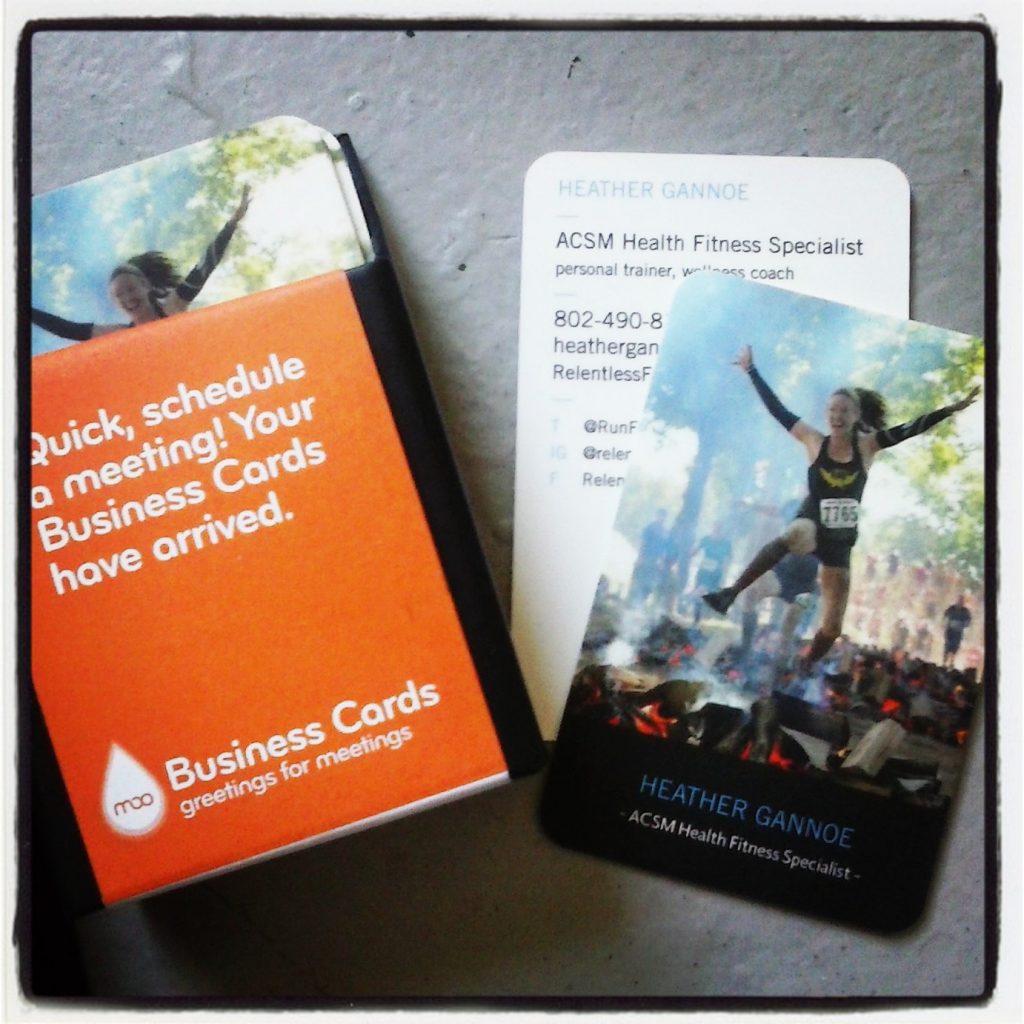 I can’t get over how hilarious these are. Use this referral link for 10% off of your own cards: http://www.moo.com/share/njgs5b

I laughed even harder when I saw them in person than I did while creating them online.  If ever a business card says “I love to move!”, this is it.   How hilariously, perfectly “Heather” these cards are.   How lucky I am that I work in a field where my business card has a picture of me leaping through the air instead of a head shot of a forced smile, mascara, and pearls.

Ever the optimist (or at least I try to be, even when I have to yell at myself to BE POSITIVE)  I also realize how lucky I am that I’m struggling to sit still when there are so many who struggle so much more to simply move. Struggling to walk, to crawl, to get out of bed every morning.  I can’t even imagine what that must be like.  It makes whining about a common cold seem simply absurd.

So, thank you, random cold virus and hilarious new business cards, for reminding me of how grateful I am for my body.  I suppose one more day of resting won’t hurt.