0shares
This was my facebook status update, but I wanted to share it here too.
Thinking out loud:There are many very interesting debates regarding the winner of last nights Biggest Loser finale, Rachel Fredrickson, going on this morning (if you don’t know what I’m talking about, just Google it. There are a ton of articles going around). As a professional in the fitness field, my immediate thought looking at her is that yes, I would be concerned about her health with such a drastic weight loss. Is a BMI of 18 technically considered underweight? Yes. Does it look like she went to far in order to win the money? Probably. I’m not arguing with a lot of the concerns expressed in many of these articles. But what breaks my heart is how many people are calling her “disgusting”, “gross”, and “anorexic”. 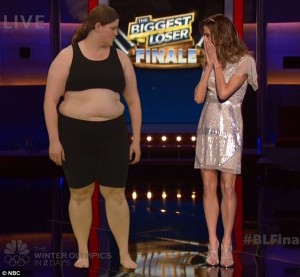 First of all, anorexia is a serious physical and mental disorder that shouldn’t be thrown around as an insult. Unless you are a medical professional who has evaluated that particular patient, you have no business throwing around such a diagnosis, Dr. Google.Second, I find a huge amount of hypocrisy in the fact that people are so easy to call this woman names and judge her based on appearance NOW, when they would probably read someone the riot act if anyone were to call any of the contestants “fat and disgusting” (etc) at the beginning of the show’s season.
Bottom line: we should all strive to be HEALTHY and STRONG, and while we are at it, QUIT JUDGING EACH OTHER based upon looks…no matter what end of the size spectrum you are on.  We are so much more than the number on the scale or in the back of our jeans.  This woman is more than simply a TV show contestant.   Words hurt…if you are truly concerned about someone, let them know in a compassionate way (obviously a TV personality is a bad example in this case, but go with it). Saying “oh my god you are way too skinny/fat/muscular, I would never want to look that way” doesn’t help anyone.
While I appreciate the initial concept The Biggest Loser was trying to portray,  that a fit, healthy lifestyle will indeed change your life, the reality is this is a television show.  Remember: It IS NOT realistic, and it isn’t supposed to be.  It is a form of entertainment made purely for financial gain of the television station, the producers, and the sponsors. If it wasn’t, it would have been cut from the air many seasons ago.   Further, it is a CONTEST show, the contestants are vying for a large chunk of money.  Money makes people do crazy things.
Cut and dry and to the point: reality television isn’t where we should be getting our health and fitness advice anyway.
End Rant.  (Be nice to each other!)