I started a blog post this week, basically gushing about the awesomeness of my new bike. Ohhh it’s so pretty, oh it’s so light, it fits me like a glove, look at me, weeee! 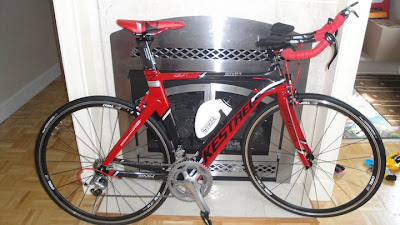 And then today, reality hit. And since reality is always more entertaining than fairy tales (just check the Jersey Shore ratings) I’ll tell you this little, umm, “life experience” instead. And just like Jersey Shore, I’ll probably share things that are totally too much information and entirely inappropriate. So here goes nothing.

I showed up this morning for my first group ride with the Grand Strand Bicycles group, also my first REAL ride on my new bike. I felt like an a-hole being the ONLY one with a tri bike. I know road bikes are way more group ride friendly, but I wanted to (who am I kidding, NEED to) put miles in on the new bike if I have any chance of racing on it this year. Besides, my road bike is now pedal-less, as I stripped the poor thing for my new bike. To make matters even more embarrassing, I took my super fast, super light, aerodynamic bike and joined the waaaay back of the pack C group. I am not ready for this bike, and I totally felt it right then and there. I know, I know, who cares. Normally, not me. I’ll show up to a group run with a bunch of strangers in some crazy neon-getup and not bat an eyelash. Running is my “happy place”.

Heather in the middle of a pack of cyclists is about as foreign as if you dropped me off in the middle of China. I’ve got no idea what’s going on, and I feel like I sorely stick out. But anyway.

We took off. Made it about half a mile down the road and came to the first stop sign. I clipped out on the left. Clipped out on the right. And apparently, silently and unkown to me, clipped back in on the left. Unknown, that is, until I fell over at the stop sign. In the whole year I’ve been riding (if you can call it a year, I can probably count on both hands how many times I took the road bike out *sigh*) I have yet to fall. So as soon as I hit the pavement and felt the gravel embed itself into my kneecap, I felt relieved. Everyone gasped and asked if I was ok, and I said “THAT WAS MY FIRST FALL, WOOHOO!!” It was actually a weight off my shoulders to get that over with. Yes, I’ll fall again, and yes, I’m sure sometimes it will hurt even worse, but at least a little bit of that “when I’m gonna fall while clipped in” anxiety is done.

So onward we go, fresh bloody road rash knee badge of honor in tow. Somewhere in the first few miles, I got separated from back half of the C group, who was only going about 14 or 15 miles (what I wanted to do on this first outing) and wound up with part of theC group going 25 ish…not what I wanted to be doing. But I didn’t know where the heck I was (the ride is in Murrells Inlet, and I’m totally unfamiliar with the area), so 25 mile group it would be. Sort of.

Somewhere within the first half mile my uhhh, “saddle” was becoming sore. I believe the bike world differentiates two parts that can hurt on your saddle: sit bones and soft tissue. I know sit bone pain. This is what took me a while to get used to on my road bike saddle, where I was cursing myself for not having a bigger butt to compensate. But no no, today’s pain was not sit bone pain. It was straight up “soft tissue”, or as Oprah so catchily coined it, my “va-jay-jay”. (I warned you this was a “too much information” post). I tried to push through it, I mean, what was I going to do, hitch hike back?

I won’t lie, though there were many times I could have easily gone into aero position, because we didn’t have a tight pace line, I was too terrified. We were riding in traffic, something I’m not used to, and quite frankly, switching back and forth from aero to brakes scares the living day lights out of me. So I stayed in the same gear, the entire ride. I’d tell you my cadence but guess who was too scared to let go of her bike to turn on the garmin on her wrist? ME.

So here I am, not able to keep up with the front of the C group because I don’t have enough cahones to reach the 6 inches forward to shift my bike. The aforementioned pain never started dull, and instead quickly turned to excruciating pain. I’m talking, that “area” has not been so SORE since I gave birth to my 8lb babies. I started this horrible cycle of “peddle peddle peddle, stand up in the saddle, breathe a momentary sigh of relief, sit back down and curse myself because it hurt even more than it did before I stood up, readjust, find a still painful but not so much that I’m going to scream position, peddle peddle peddle, repeat”.

For 18.5 miles. Thank the good Lord that the very sweet Tasha was ready to head back the shop early, led us back, and I was spared the entire 25 miles, or whatever the rest of the C group did.

I hate my saddle. I hate it so much that if I only knew how to take it off (I don’t, I know nothing about bikes) I would throw it into traffic. Or the ocean, a fire, a pit of hungry crocodiles. I know that part of the reason it hurt so horrifically is because it’s probably designed for me to ride aero , and ride aeroI did not. 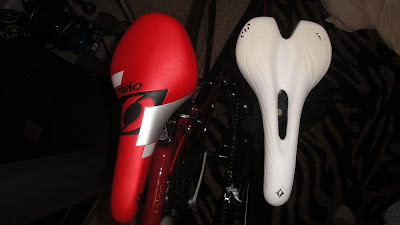 Offending saddle on the left: old saddle, which I never thought I would compare to an amazing fluffy comfortable cloud, on the right.

I ditched Dawn for the post ride run, waddled back to my car and went home. Where I discovered the pain was only going to get worse, from the chafing (can you even put tri-slide down there?) and the swelling. Yes, SWELLING. Do not tell me that “discomfort and getting used to the saddle” involves swelling, I don’t buy it.

I cried. Yes, I cried. Part of me blames the hormones (PMS, what the heck might as well throw caution to the wind and tell you every personal detail. I did , after all, blog about hemorrhoids once, so what am worried about). I cried that I would rather seriously go run a 100 mile ultra marathon RIGHT NOW than ever allow my girl bits to endure that sort of pain again. Triathlon, to me, seems like a constant battle of two steps forward, one step back. Am I even cut out for this? Why do I keep subjecting myself to triathlon when I suck at swimming and cycling is so dang intimidating?

On my way home, I stopped at the gas station. As I was paying, the cashier asked me about my cycling jersey, one from the Ulman Cancer Fund’s “10” event. As soon as I started telling her about UCF…I noticed her hair. It was short, and not just trendy hair cut short. I knew before she even said it. She started telling me that she is 3 radiation treatments away from being finished with her battle against breast cancer. A battle that she told me she won. Diagnosed last summer, surgery, chemotherapy, and now radiation, all while managing a gas station. She told me some days, she would go just a ways up the road to the local Cancer Center, get her treatment, and come right back to work a 10 hour shift. She told me she had no other choice, and that she DREAMS of one day a cure, and/or vaccination or anyway to prevent this, so that others don’t have to endure what she did. And then she thanked me. Thanked me for raising awareness and funds to help people like her. I congratulated her on winning her battle and went out to my car.

And I cried again.

If a sore va-jay-jay, self inflicted by pursuing one of MY dreams is the sort of pain I have to endure right now, then I’m one lucky son-of-a-gun.

Perspective is an amazing thing. I’m going to ice the bits (I can’t help but laugh), get my old saddle switched out to the new bike, and next Saturday, I’ll be back to that group ride. I swear I will conquer this cycling thing…

Happy (and pain free) running and riding my friends!

Previous Post: « "The only thing that will stop you from fulfilling your dreams is you.”
Next Post: Endorphins are my coping drugs. What’s it to you? »