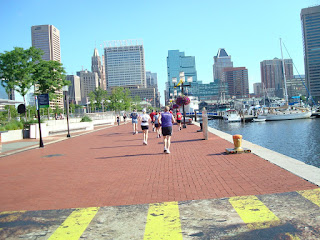 Last week, fellow running mom, new vegetarian, and kick ass Spanish homework procrastinator Bethany, posted this blog in response to the article from the New York Times “Plodders Have a Place, but Is It in a Marathon?” in our cafemom.com running forum.

Over the past week, I’ve read/heard a few comments that kept bringing me back to this article, and I can’t get it out of my head. I’m totally stealing B’s blog topic, but I need to vent.

Let’s begin, shall we? Exhibit A:

“It’s a joke to run a marathon by walking every other mile or by finishing in six, seven, eight hours,” said Adrienne Wald, 54, the women’s cross-country coach at the College of New Rochelle, who ran her first marathon in 1984. “It used to be that running a marathon was worth something — there used to be a pride saying that you ran a marathon, but not anymore. Now it’s, ‘How low is the bar?’ ”

How low is the bar? How about, as low as the fact that last year, over 1/3 of the population of the United States of America was not only considered overweight, but OBESE, and this year, that number has only increased. Don’t even get me started about the rising epidemic of childhood obesity.

So, instead of celebrating the fact that people are getting off of their butts, attempting to create a better lifestyle for themselves, and setting AMAZING examples for their children, let’s instead criticize those people for being too slow. Let’s call their achievements “a joke” Yes, that sounds like a good plan.
But Ms. Wald’s comment isn’t the first I’ve heard like this.

I personally have been laughed at (I’m not kidding) because my PR marathon time of 4:37 is slower than Oprah’s PR of 4:30. Besides that, I’ve been told that anything over 4 hours doesn’t mean you are a serious runner anyways.

You got that friends? I don’t care if you get up at 5:00 am for 5 months, to get your running done before the family wakes up. I don’t care if you gave it EVERYTHING your body had, if you quit smoking, drinking, nights on the town, lost 50 pounds in the process, or went from not being able to walk 2 miles to RUNNING 26.2 miles. If you don’t break that 4 hour mark, your marathon means nothing.
Disgusting, isn’t it, that in the wonderful, supportive world of running, we have (more than a few) bad apples.
I get the safety and logistics of having a cut off time. I completely understand why runners may get pissy when someone else, on a whim, decides to “run” a marathon, never trains, barely survives the thing, and walks around bragging from then on out “oh yeah, I did a marathon, piece of cake.” Yeah , I can see how that grinds your gears. Heck, I feel unworthy compared to many runners, even those much slower than myself, because I haven’t been able to ever commit 100% to my training. You have to respect the marathon, bottom line.
But would I EVER take away the accomplishment of another runner, who’s personal sacrifices and struggles I may never know, just because they aren’t fast enough? NEVER.
I’ve seen the back of the pack. Both on my own accord, and as a volunteer, sherpa-ing in other runners. And I’ll tell you one thing: 90% of the people in the back of the pack are giving it all they’ve got. They are FAR from being a “joke”.
So what is the standard of “quality” when it comes to a marathon? Since this is MY blog, I’ll give you my standards:
If you put in the training,
If you RESPECT the distance,
If you give it everything you have, in your body and in your heart, and strive to be the BEST you can BE…
…then wear your medal proudly. YOU have a place in the marathon.

And I think those few bad seed elitists should remember exactly where their paycheck comes from. Like John Bingham said, “The sport is fueled and funded by people like me”.

Let’s all just love this sport for the million reasons we do. And be thankful that with the ever growing running population in this country, we are each afforded more and more opportunities in so many ways, whether it be a sponsorship, an opportunity to travel, write a book, win a running company sponosored blog contest, watch a marathon on national television or even just having more local 5k’s to race because there is more of a demand.

To end this post on a happy note, let me share a bit from a kick butt response to the NYTimes article, called “Missing the Essence of the Marathon” by Mary R. Wittenberg

“To us, it’s about conquering the distance and conquering self doubt…A marathoner is a marathoner regardless of time. Virtually everyone who tries the marathon has put in training over months, and it is that exercise and that commitment, physical and mental, that gives meaning to the medal, not just the day’s effort, be it fast or slow. It’s all in conquering the challenge.”
Happy running my friends. Keep doing what you do, enjoy YOUR sport, and YOUR race 🙂

About a decade ago, I was a happy road runner, traversing the paved streets of major cities while collecting new half and full marathon finishers medals. I remember thinking that a race had outdone themselves when I'd show up to an aid station, and in addition to water and Gatorade, they had … END_OF_DOCUMENT_TOKEN_TO_BE_REPLACED

When you were little, chances are your mom was always hounding you to "go outside and play". Little did you know, she was doing more than just trying to get you out of her hair - she was helping you stay healthy. As adults, we seek alternate ways to enjoy the outdoors that differ from the … END_OF_DOCUMENT_TOKEN_TO_BE_REPLACED

The older I get, the more I truly believe that the Universe has a way of frequently working things out, if you're open to it. It might not be what you expected, or wanted, but nevertheless it will be a happy ending. A classic case of the Rolling Stone's "you can't always get what you want, but if … END_OF_DOCUMENT_TOKEN_TO_BE_REPLACED