Being sick is never fun.   But you have to admit, being sick as a little kid is slightly more fun than the adult version.

I remember when a cold or a virus would knock me on my ass as a little kid.  Mom would make me a comfy bed of blankets and pillows on the couch and cater to me throughout the day, typically with ginger ale and saltine crackers.  I would pass the sick time by watching all of the fun daytime TV shows that I never got to see while I was at school, like “The Price is Right”.  Sure, I might occasionally miss something important, like that one time in kindergarten when I got the chicken pox and missed out on my debut performance as the “Spring Wind” in the school play.   And then there would be missed homework or tests, but if you were a straight A goody two-shoes like I was when I was little (guilty), usually your teachers would let the missed work slide.

As an adult, getting sick is not such a saltine fueled walk in the park.

Last Tuesday night I was hit with a sudden fever and a runny eye.  Just one.  Interestingly enough, it hit while on a mid day trail run.  After only a mere mile I started falling apart, and told Geoff to go ahead without me, I’d walk the shortcuts and meet him at the finish.   I knew this wasn’t going to turn out well, but I had no idea how bad it would be.

Fast forward to today, exactly one week later.    I was diagnosed with a double whammy of strep throat AND conjunctivitis.  Pink eye, in lamen’s terms.  My 6 year old told me to stop touching my butt then touching my eye.  Yeah, yeah, thanks kid…but I’m going to go ahead and blame this bacteria on someone at the gym OR at his summer camp…and then took his smart ass comment as an opportunity to remind him to wash his hands after he uses the bathroom.  Or he’d end up looking like me! Dun dun dun….

Anyway, the last week has humbled me in a way that an illness hasn’t humbled me in YEARS.  Decades even.  My days went like this:
Wake up with a fever and chills.  Take 1000 mg Tylenol.  One hour later: sweat like I’m sitting in a sauna.  Three hours later: start shivering again.  Sit around miserable, lethargic, and dizzy until I hit the 6 hour mark and then finally seek the sweet sweaty relief of 1000 more mg of Tylenol.  Repeat all day until it was time to go to bed.

I was utterly useless.

And, because now I’m a “grown up” (I often use this term loosely), instead of throwing my school cares to the wind, I called in sick from work all week, canceled on a handful of clients, missed a bunch of writing deadlines, missed the entire first week of my next training schedule (…pausing here for someone to say “wait, since when did she start using a training schedule?”  It’s true. More on that later), ruined Geoff’s birthday celebrations (they are postponed) and used the term “Please, mommy doesn’t feel very well right now” about ten bajillion times.

Alas!  Yesterday was a thunderstorm filled day spent on the couch, watching a marathon of early 80’s movies (the Warriors, Conan the Barbarian, and one of those Mad Max movies…all Geoff’s picks) I woke up this morning cautiously optimistic…yet feeling almost 100%.

Now that I can finally envision getting back to training (and have stopped googling things such as “rheumatic fever and sepsis due to strep throat”, seriously, the internet is bad when you are sick) I’m excited that I’ve finally found something I want to train for.

First, I’m really excited to announce that I’ve been invited back to Bethlehem PA, the home of the Runner’s World headquarters, for the Runner’s World Half & Festival.   You may remember that I ran this race back in 2013 (recaps here), and then their Boston Festival in 2014.   After the little bit of, uhm, “a stir” I caused in 2014, I’m sometimes surprised that Runner’s World invites me back to anything, haha.  But the truth is, they are one of the most amazing groups of people I’ve ever had the pleasure of meeting.  And I cannot wait to run the “hat trick” (5K, 10K, & 1/2 marathon) again this year…AND stick around at the finish line to cheer EVERY LAST RUNNER in.

BUT what I’m MOST excited for that weekend, is the addition of the Altra 3.8 mile trail run.   Giddy actually.

So while I’ll be running all 4 races that weekend, the one I’d like to focus on as my “A” race is that trail race.    It’s been a long time since I actually attempted to “race” a short distance race (as opposed to simply participate) so I’d like to see what I can pull out of my, errr, trail running shoes.

Interested in joining us? Check out www.rwhalf.com, and then use the code “blogrelentlessforwardcommotion” at checkout for a discount on registration! 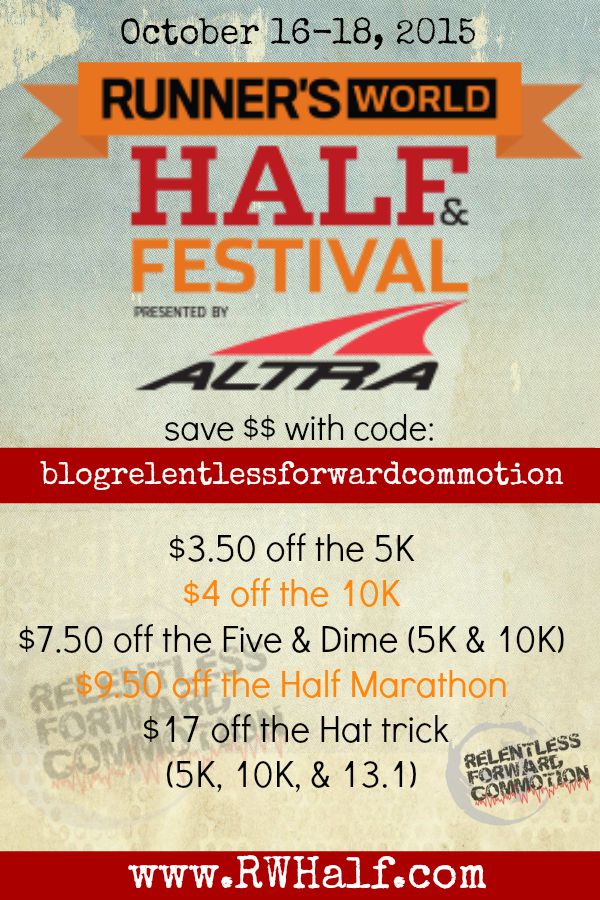 A few months after the RW half, Geoff and I are going to partake in “One Epic Run“, a 24 hour race consisting of 3.1 mile loops, just a few hours West here in South Carolina.   I have absolutely no idea what our actual goal is for the 24 hours,  but I’d like to hit at least 100K.  I’ve gone as far as creating us an actual training schedule, hung on the “supplement closet” door (yep, we have an entire closet just for water bottles, Clif bars, and hydration mixes).  Geoff dutifully completed day #1.    If you read any of the above blog post you can already guess that I’ve done nothing.

So, there is a random “what’s new in Heather’s life” blog post.  Stand by for the next shoe review…