I haven’t played Runner’s Lounge’s TIART (take it and run Thursday) in quite sometime, so here goes:

Question: If a genie were to appear and grant you any three running wishes in the world, what would you choose? It can be anything from superhuman powers, new running inventions, race entries, shoes, you name it!

How about I trade in three wishes for one – an unlimited bank account? Or is that against the rules, like “wishing for more wishes”? Oh, and the VO2max and resting heart rate of Lance Armstrong. Yes, that would be nice.

But back to the money.

Running, which seems to be an innocently inexpensive sport, has actually turned out to be quite an expensive sport for me. (But it’s ok, because I don’t buy designer purses, remember?) It’s expensive, because I LOVE to race. And by race, I mean “participate in” , not “try to win”. Unless it’s a local race, then I see what I can do 🙂

With an unlimited bank account, I could register for every race that strikes my fancy, and not have to prioritize. Mortgage or marathon? Diapers or 5k? Cell phone bill or new sneakers? You see how it goes. Being a responsible adult is such a bummer sometimes!

With an unlimited bank account, I wouldn’t have to worry about leaving my family behind, finding a babysitter, or taking time off from work. Instead I could pack up my family in a giant RV , a-la Dean Karnazes 50/50 deal, and go for it. Or who am I kidding, with all that money, we can fly first class and stay in a penthouse. But really, the RV sounds more fun.

While I want to run all 50 states, I don’t really have any desire to do the “marathon on all 7 continents” deal. Yet, if I had endless financial resources, I might just say “what the heck, let’s go run on the Great Wall of China!!” (no really, there is a marathon there!) After all, it would be some sort of sick revenge to stomp all over the history that gave me SUCH a headache on my midterm, now wouldn’t it??

But the truth is, I am a poor college student, with a hubs and kids. And in that little family unit of mine I have an INCREDIBLE support system. I wouldn’t trade them for anything. So I’ll gladly sacrifice spa dates, new clothes, a purse and shoe buying compulsion that seems to plague most women in my age group, nights on the town, and other luxuries so that I can fund my race addiction.

And on that note, without further ado:

April: My very first EVER sprint tri! Hosted by my school, I can’t wait!

October: Inaugural Myrtle Beach Mini Marathon (why do they have to call it “mini”? I prefer “half”)

November: Philadelphia Marathon (#6 – only 44 to go!! Well…actually 46, since Disney didn’t count …stupid chip….and MCM is counting as DC. But yeay!) 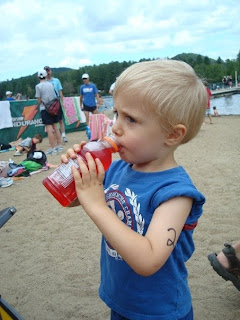 And a slew of other local races, whatever I can afford/find the time for. Including tot trots for my boys, if they are so inclined.

And that list, my friends, is called me being very, very blessed and lucky. And for that, I’m very, very grateful 🙂