During my undergrad studies, I was required to take a sports psychology class.  We learned about things like goal setting, imagery, arousal regulation, and extrinsic motivation.  We were taught how to prevent creating stressed out athletes, we were taught how deal with unfavorable team dynamics.  We were taught a lot of things that often related to dealing with competitive athletes…not necessarily a timid, average “jane”.  We were not taught that there is often and INCREDIBLE amount of emotion tied into fitness and weight loss (just look at the backlash/uproar over the latest Biggest Loser debacle).  We were not taught that part of the “personal trainer” job description included doling out life advice as often as  you dole out push ups.

Most people, whether they want to admit it or not, know (or at least have a general idea of) the health benefits of exercise.   But many times, the lack of exercise, lack of healthy eating, or cause of weight gain often stems from something more than simply “I just didn’t feel like it”.   There is often emotion, shame, remorse, or regret tied in somehow, for whatever reason,  and more often than not, the trainer is the sounding board for such emotions.  You see, there seems to be some sort of unspoken bond that happens between two people when one drives the other to near vomit levels with a brutal workout; it often leaves the near-puker feeling like they can open up and share their feelings.   And of course, I get it.  This is the exact same reason I’ve spilled my guts (verbally, not literally, though they sometimes go hand in hand) to near strangers in the middle of a 15 mile group run, and vice versa.

Let me say right now that I certainly do not mind this aspect of the job.   I obviously love working and interacting with people, or I would not have pursued this career.  I like listening, and I appreciate that others feel they can trust me enough to spill their worries and weaknesses.  The problem I have is that I don’t ever feel like I know the right way to respond.  No one taught us in school if it is OK to hug a client who bursts into tears over the fact that she can’t stop emotional eating.  No one taught us how to determine if the client saying that she hasn’t had time for exercise and thus “let herself go” needs an understanding, compassionate nod, or a reality-check boot in the ass (again, not literally.)

Sometimes I wish I had some sort of contraption where I could allow a client to enter my mind for just a few minutes to see, and more importantly, feel how fitness has changed my life.  Clearly I’ve been watching too much Futurama, but let’s go with it. 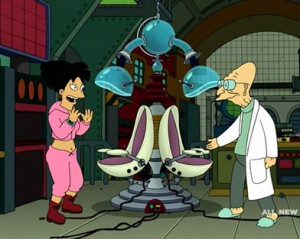 I truly hate talking about ME during a session, because it’s not about me, it’s about the client.  But I also hate that awkward moment when the client stops rambling only to say “but you are so fit and athletic, you would never understand“.  Because in my own way, I do understand.

I remember the shame I felt after coming home for Thanksgiving after my first semester in college, and a family member took one look at me and the freshman 20 lbs I had gained almost instantly, and said “they sure feed you well at school, don’t they?”  I had absolutely zero willpower to exercise over the next few years in school (this was when I was in school for marine biology), and instead drowned my stress and frustration in dining hall pasta and gallons of cheap beer.   I hated it, but I simply couldn’t muster up the willpower to stop that cycle.

I once struggled with self loathing and envy that despite being healthy by medical standards, I wasn’t smaller.  I have no idea who I was trying to impress or even WHAT size I thought I should be, I just know that I didn’t feel small enough.  So I limited my food intake and made myself miserable.  I’m lucky that these bouts during my teenage years and early 20’s  never lasted more than a week or two at a time and didn’t develop into something far more serious.  Regardless, it was still an emotion that in retrospect, breaks my heart that I, or anyone, ever had to experience.

During my last pregnancy, I topped the scales over 200 lbs.  Yes, you read that right. I’ve weighed over two hundred pounds.  Imagine my surprise when my baby was born weighing in at only 8lbs 2 oz, and I still had a good 70 lbs to lose.   I felt wildly uncomfortable both physically and emotionally, and angry that I let my taco bell cravings get out of control.

So yes, while fit and athletic now, I can assure you that in my own way, I have “been there”.  I’ve struggled with weight and willpower and motivation.   But what I really want my clients to know isn’t simply how I can relate to their feeling of frustration.

I want them to feel how empowering exercise can be.  How awesome it feels to be active and fit.

I want them to know how bad-ass and amazing it feels to cross the finish line of a marathon, or a half marathon, or even a 5K, when previously you couldn’t even run a mile.

I want them to know what it feels like to drop the “diet and exercise as a punishment” mentality, and instead view physical activity as training and food as fuel, and to most of all, to enjoy both.

I want them to know the GLORIOUS feeling of a PR, whether it be in a front squat or simply making it up a flight of stairs without feeling the slightest bit winded.

Or the powerful feeling of wanting to quit a workout, or a race, or something difficult a hundred times or more, but persevering and NEVER actually quitting.

I want them to know how I’ve been through some really shitty times, some situations where I truly just wanted to give up on life.  Yes, literally this time.   But exercise helped.  While it certainly didn’t fix anything, it cleared my head and brought a little bit of optimism back into my life.  The runner’s high… it is so very real.   I want them to know how exercise quite literally, more than once, saved my life.

Most of all, I want them to trust and believe me when I tell them that if they just stick with it, stick with me, and believe in the process, it will be SO worth it in the end, it will change their life.

But I can’t tell them.   For this process is one that can only be understood once it is experienced.

So instead I smile and nod, feeling like an idiot because I don’t always know what to say.   But what I do know how to do is walk that fine line between pushing someone and encouraging them.  I’ve been blessed with the gift of urging people to leave their comfort zone.  I believe that everyone I encounter has the potential within them to reach their goals.  The trick is getting them to believe it too.

So, if ever you and I find ourselves in the same room, and you start spilling your heart and I’m just standing there nodding like a buffoon…know that I’m not bored, annoyed, or secretly judging you.  Know that I simply don’t have the right words to say that in my own way, I get it…and I believe in you.

Previous Post: « On Rachel Frederickson and Your Words.
Next Post: The Fat Burning Zone – It’s Probably Not What You Think It Is. » 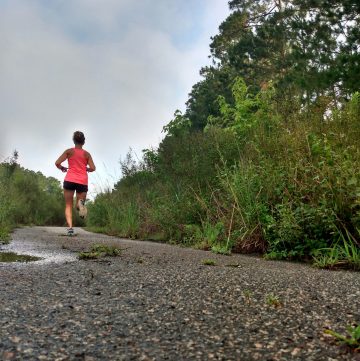