“Bittersweet” is a term I’ve come to embrace over the last few years.   It implies that despite an outcome that is not favorable for one person, the outcome as a whole is still positive, or at least positive in nature.

On a personal level it means “suck it up buttercup, quit being selfish, and be happy for everyone else instead.”

(Warning: this is one of those Heather-rambling posts that truly doesn’t have a point nor a purpose.  Sometimes these posts need to escape my brain through my fingers in order to make room for more important, useful posts.)

The 2016 Myrtle Beach Marathon weekend, for me, was bittersweet.  It was the first year that I’ve lived in Myrtle Beach and *haven’t* run this race.

(Cue the violin “woe is me” song, and hashtag this one a “first world problem”.)

Now, if you are new here and thinking to yourself “but didn’t she just move to Myrtle Beach?” well, you aren’t entirely wrong. I did just move BACK to Myrtle Beach after a nearly 4 year stint in my home state of Vermont.  But the long time readers will remember that I lived here from the years of 2003 to 2011, and ran the Myrtle Beach Marathon or half marathon every year from 2005 to 2012 (yes, I came back for that last one).  In fact the 2005 Myrtle Beach half marathon  was my very first race ever.  So needless to say, there is some emotional attachment to this particular race, and there always will be.

It was odd watching the race from my computer 1,000 miles away during the years of 2013 -2015.  And naturally, I assumed that the first year we wound up back here in South Carolina, I’d be running in the event.

But here we are, and I didn’t run. 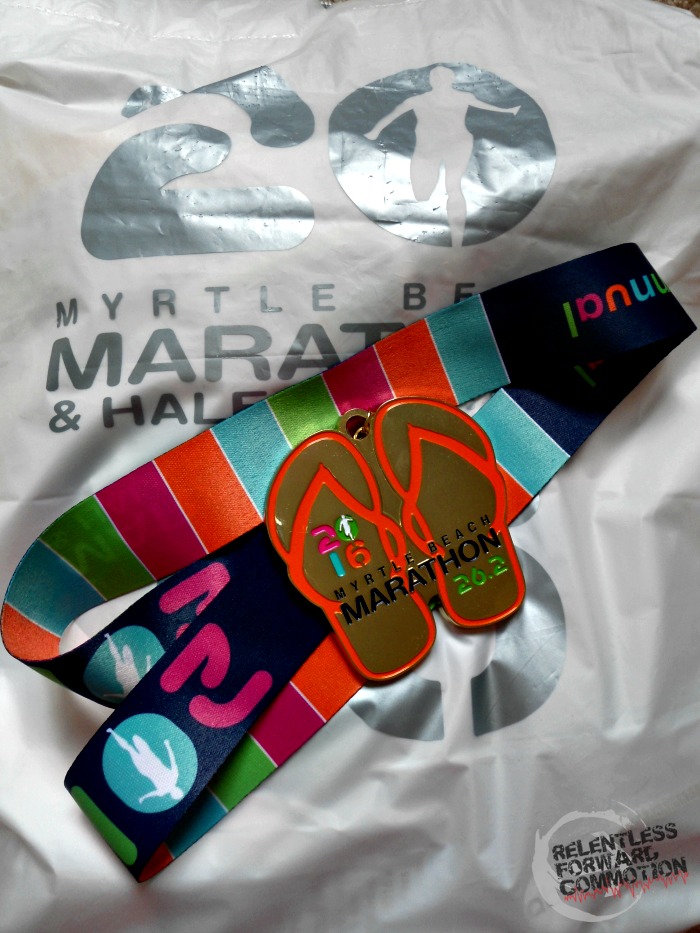 Instead I stood diligently at the finish line of the 2016 Myrtle Beach full & half marathon, cheering on thousands of racers, as people had done for me many times before.   And while it kind of sucked knowing that I could totally be out there, pounding the pavement with my endurance family,  cursing at mile 23 and the fact that I actually dislike pavement (give me trails!), celebrating the finish line chute, and reveling in a post race bagel beer with a big shiny medal around my neck… 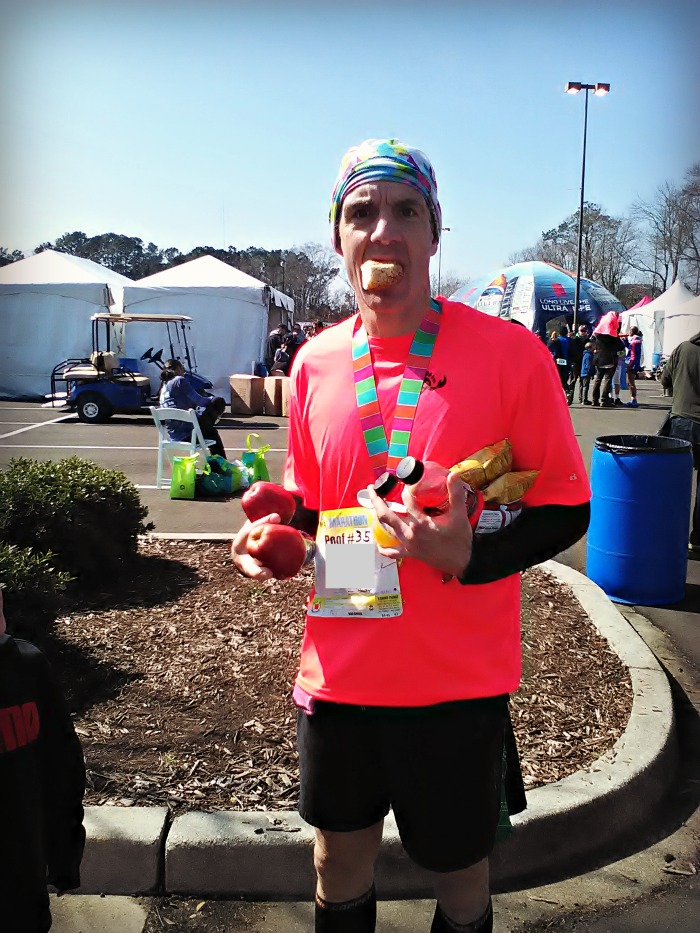 You can take an ultra runner off the trails, but you’ll never take the snacks away from the ultra runner. Or something.

…it was also kind of cool to NOT be out there.

Once I got past the FOMO, I found it really was fulfilling to experience the race from a different point of view: coach and support team.

My Run 843 team from work was out there, two of them running their very first half marathon. I suppose the best analogy, as cliché as it may seem, was that I felt like a mother bird who had just pushed her babies out of the nest. I had given them all of the tools to get to the finish line, I had overseen their training from start to finish, and now it was completely up to them.  All I could do was stand patiently at the finish line and count down the moments until their expected finish time, hoping that everything was going according to plan out there.   Fly, baby birds, fly! 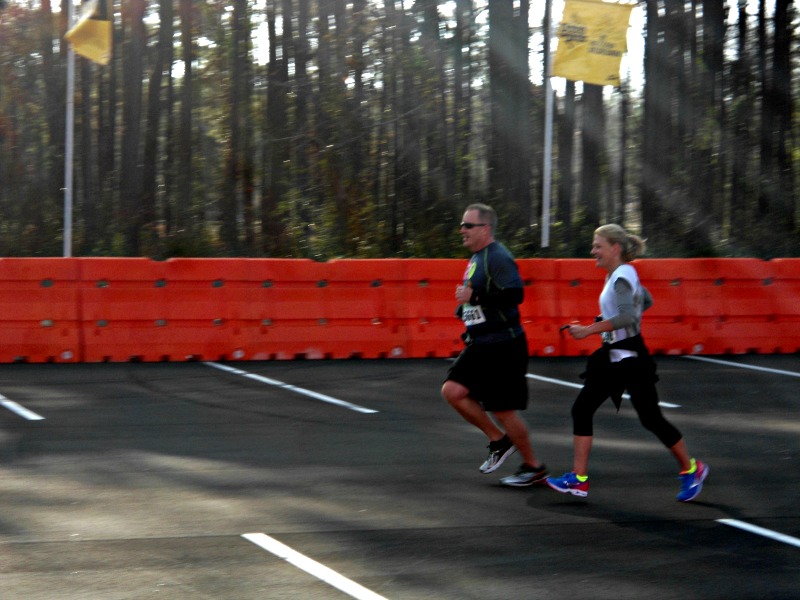 And fly they did!  Their first goal was to finish.  Their second?  A sub 2:30 half, one they thought was wishful thinking.  I didn’t want to put any pressure on them with a goal time for their first race, so I kept my mouth shut…but I KNEW they were capable of that time goal.  And they crossed the finish line at a 2:27 and change.

Not 48 hours later, they are already talking about beating that time at their next race in May. I’m one happy coach. 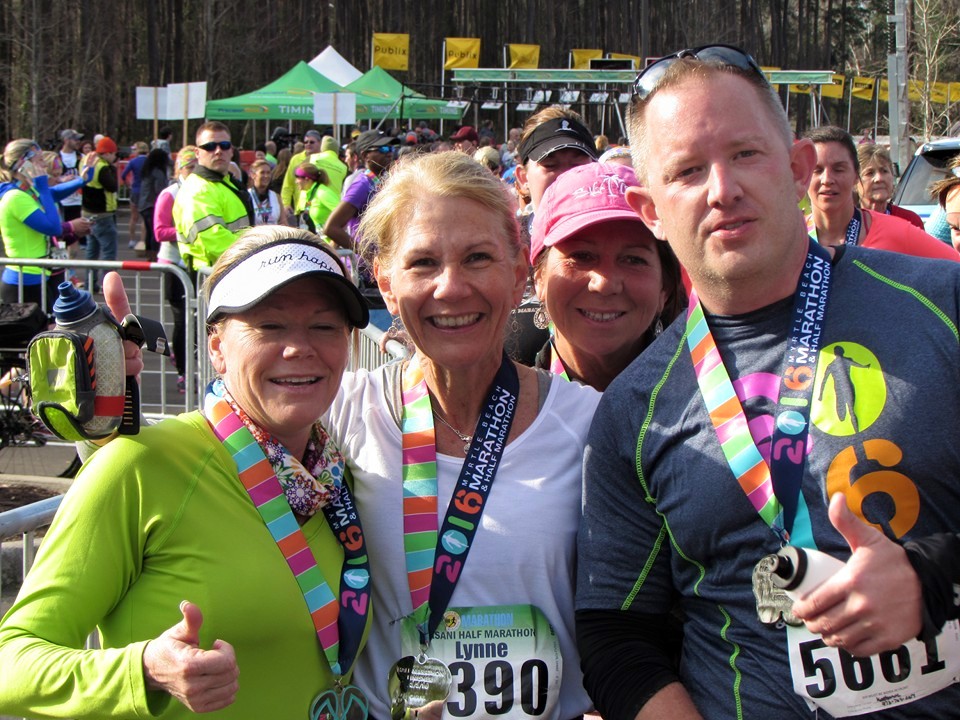 Some of team #RUN843, who came in minutes under their goal time! 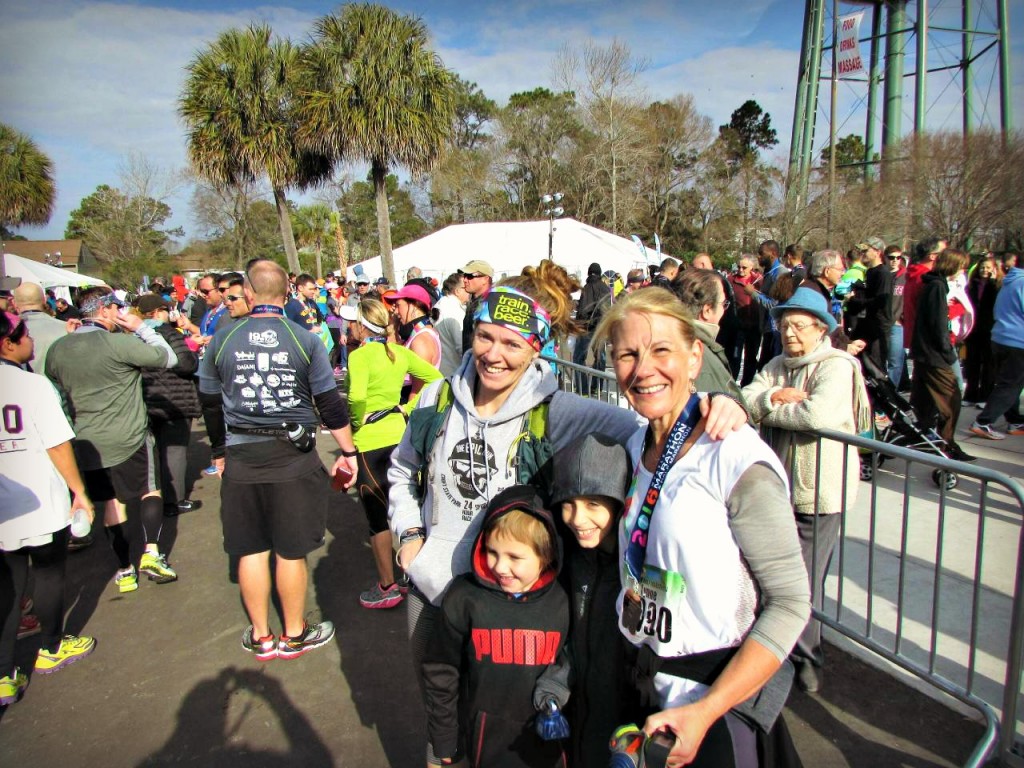 On a more entertaining note, I got to experience a relatively large marathon as a sole significant other/support crew, while toting two kids around.   For YEARS, in a past life, I would either show up to races alone, or  with my sister as my lone support system.   My kids and their dad hardly ever made it out to cheer me on, and in retrospect, I can (sort of) understand why.  Holding onto the hands of a 7 and 9 year old with a mama-hen death grip while trying to navigate a sea of thousands of racers and spectators is hard enough; the thought of doing it with toddlers is terrifying.  But still, a part of me always wanted my family there.  (Not that my amazing sister isn’t family, but you know what I mean).  And more so, I wanted my kids to see running and racing from my point of view, which almost never happens, because I’m always the one running.

But this weekend, they got that experience.

We were able to talk about how, yes, early morning wake up calls and freezing cold start lines SUCK, but it  is a very selfless thing to do to show support for someone you love, who worked very hard towards this particular goal.

Even if the person you love sort-of missed the start of the race. 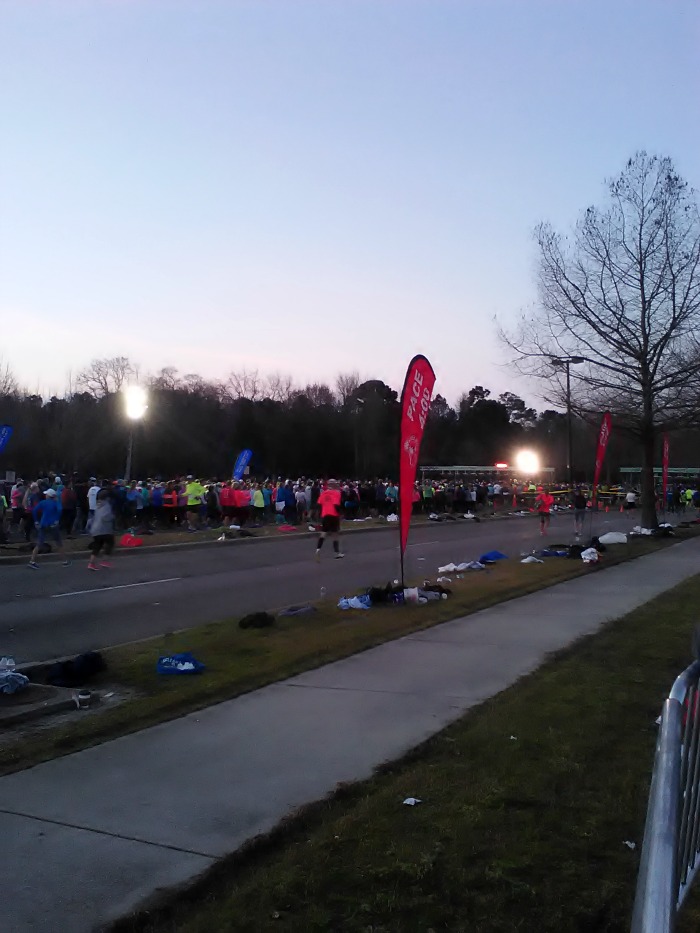 On the left: half marathoners. On the right: Geoffrey. Everyone else running the full is gone, because Geoff was in the port-a-potty when the race started.

But of course, this cold weather lesson was not without some obligatory complaining: 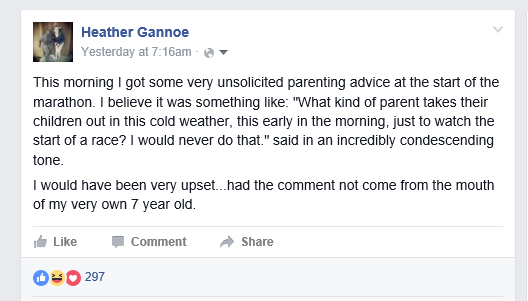 The boys and I got to stand at the finish line together and cheer for random strangers.  We talked about how cool it was that people trained so hard to accomplish a goal like finishing a half or a full marathon.  My heart nearly exploded when my 9 year old said “mom, I feel really happy for these people. ”   And I couldn’t stop laughing when my 7 year old cheered the loudest for the 4 hour pace group leader for coming in right before the 4 hour mark.  “HE MADE HIS GOAL TIME, WOOOOOO!”  He was so damn proud of that pace group leader. 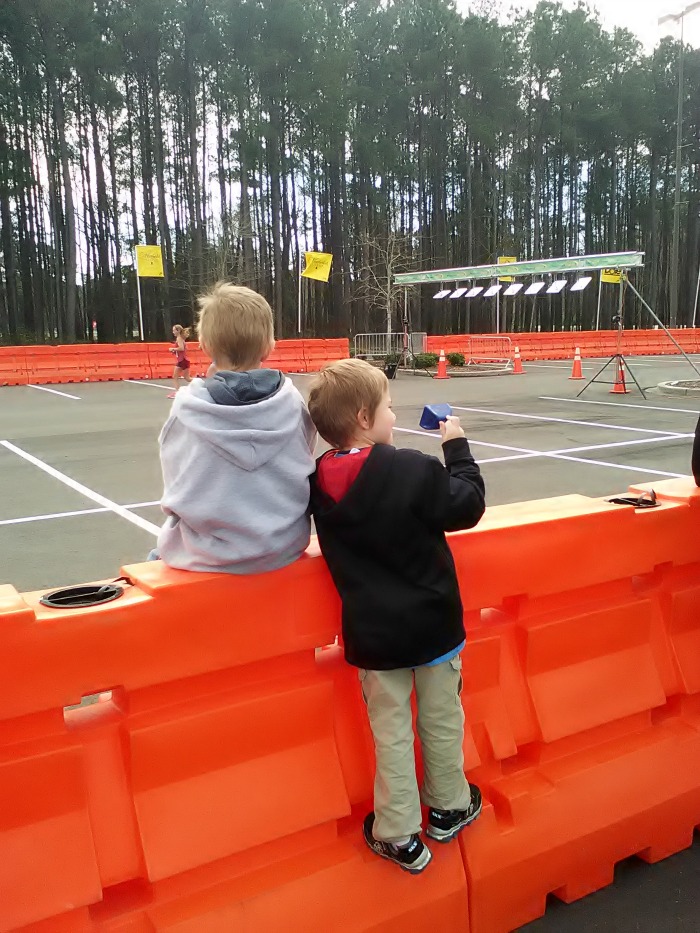 I witnessed not one, but TWO local running friends qualify for the Boston Marathon.

I saw countless other complete strangers cross the finish line with a giant smile on their face, so I can only imagine they accomplished their goals as well.

I got to cheer for my very favorite person on earth (over the age of 9, that is) as he finished a full marathon that up until a week ago, he had no idea he would be running.  I got to be the support system that I always used to yearn for, and that was a pretty great feeling. 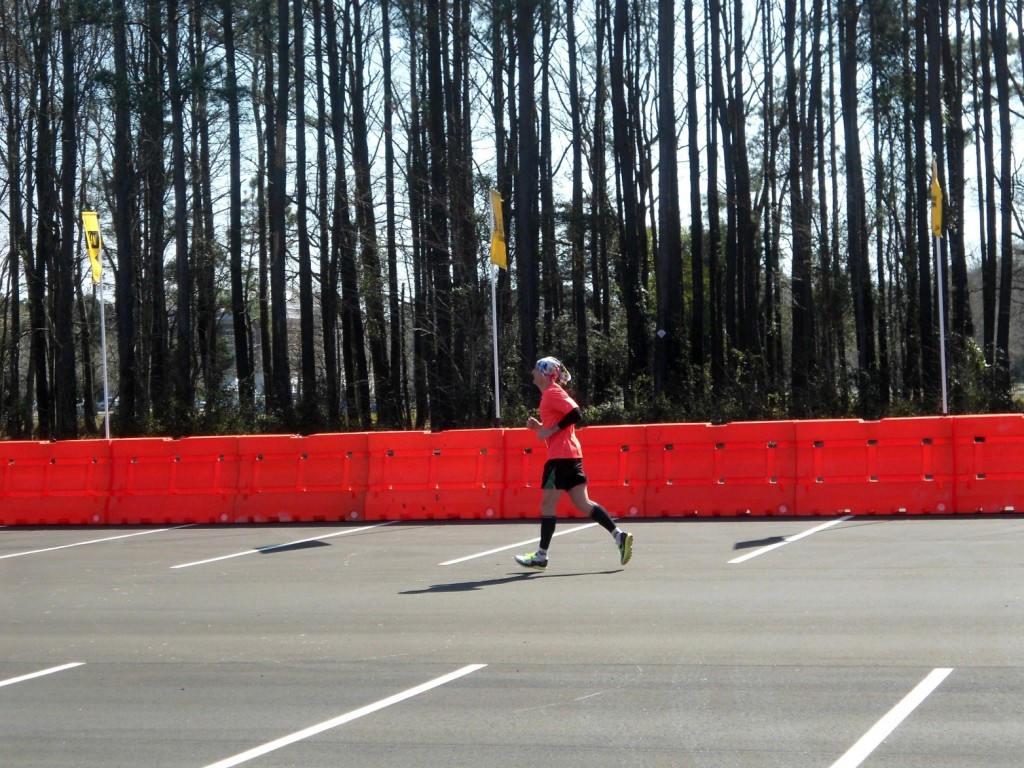 So while it was a very strange, envious feeling to stand there and watch thousands of people run the streets of my new/once again hometown, it was an experience that I was still grateful for.    I was able to contribute to the energy that is the OTHER side of the finishers chute.   And frankly, I’m proud to be a part of this amazing community, regardless if I’m the one wearing a timing chip, or ringing a cowbell.  Congrats to all of the finishers this weekend.

Run on, my wonderful friends.