I hit the snooze button on my alarm, twice, before I reluctantly crawled out of bed.  It was 4:45 am (and 4:50, and 4:55…) and I had committed to running 15 miles with a stranger.   Meeting up with someone you’ve never met, in the dark, in what was likely an empty parking lot, is the kind of stuff that Lifetime movies are made of.

Unless, of course, you are a runner.

In which case, meeting up with someone you’ve only briefly talked to on the internet is not only completely normal, it happens so frequently most runners no longer bat an eye at a situation that otherwise might have “the next episode of unsolved mysteries” written all over it.  Especially here in Myrtle Beach, where we have nearly 18 million visitors come through town every year.  People want to run while on vacation, and they often reach out to the locals for route suggestions and running partners.  And when this particular stranger reached out for company, I figured it would be nice to have someone to talk to for 15 of the 19 miles I had on my own schedule. 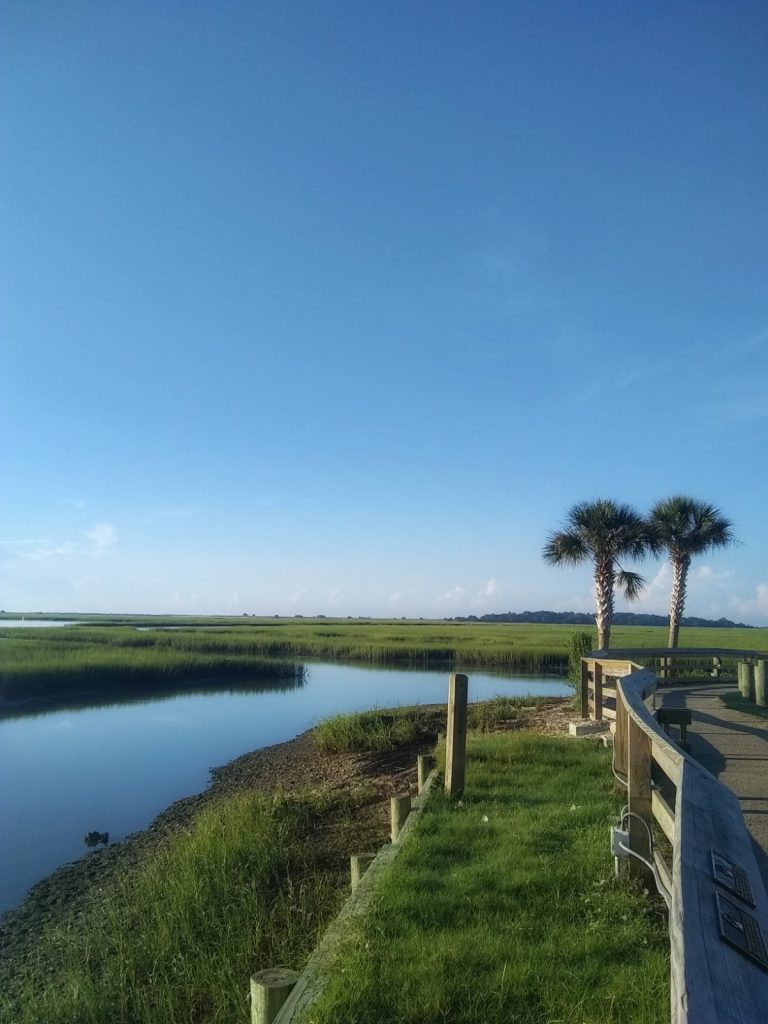 Who doesn’t want to run with these kind of views?

Side note: someone should really invent a running tour guide business in this town.  I’d do it, but people would get sick of paying for the same 6 mile loop at the trail over and over again.

But back to the story.

It was now 5:00 am, and I was simultaneously running through my morning “feed the zoo” routine (4 rabbits, two cats, a goldfish, and myself), while slugging down a highly caffeinated fruit juice drink, impatiently waiting for the energy buzz to kick in.  I was eating my breakfast toast, scrolling through Facebook, finally starting to feel the effects of the sweet, sweet caffeine when…

I wasn’t mad though, because for whatever reason, I was dreading the run myself.  Not because of the company, not even because of the fact that we’d be running on road – the Huntington Beach run we had planned is one of my favorite routes in this area.   For whatever reason, ever since I returned from New Hampshire a few weeks ago, I’ve had a hell of a time getting back into my training groove.   Maybe it’s because my sleep has been fitful.  Maybe it’s because it’s done nothing but rain for the last two weeks, and the trails are perpetually closed.  Maybe Mercury is in retrograde.  I have no idea what that actually means, but people seem to blame bad moods and all around “funks” on it, so I will too.

I contemplated going back to bed, as I was so exhausted.  The little voice inside of my head, the one that is responsible for clicking “submit” on ultrasignup.com registrations, reminded me that the cycle of skipping a run because you’ve had a string of bad runs is the start to a gnarly and vicious cycle that is hard to bounce back from.  “It’s not too late”, the voice whispered, “go for the run.”

At this point, however, I had contemplated going back to bed long enough that my entire morning timeline was a bit thrown off.  The original plan was to drop Geoff off at the gym, drive down to the bike trail in Murrells Inlet, run the 19 miles I had planned for that day, and finish in time to come back to the gym, shower, and meet my 10:00 am client.   Because I had hemmed and hawed for so long (that’s code for mindlessly scrolled Facebook), I now only had time to maybe squeeze in 12 or 13 miles.

Unless I ran on the treadmill at the gym.

The thought alone was enough to initially make me cringe.  One of the reasons I love to run is to be outside among the trees, to travel through nature, to experience the beauty of the outdoors.  The treadmill is the complete antithesis of being one with nature, it is sheer monotony at it’s finest.

Trails over Treadmills. If you aren’t already following UltraRunningMemes on Instagram, you should.

So I drove to the gym, secured a treadmill on the end of the row (better for people watching), laced up my trusty Hoka Clifton road shoes that haven’t seen the light of day in months, said a prayer for my sanity, and started running.

At minute 20 I nearly quit.   Even turned off, the T.V. in my face makes me dizzy.  I’m tired. I hate this.  My knees hurt. Ugh.  But maybe just a few more minutes.  I contemplate whether or not the plethora of ice pops I’ve been eating as of late has had an effect on my athletic performance.  My 11 year old lectures me about high fructose corn syrup every time I eat one.

At minute 70 I realized that the worst part of running is always the very beginning and the very end.  Of course, the longer the distance, the longer the initial suck factor lasts.  In this case, it was approximately 45 minutes before I stopped realizing how uncomfortable I was on the treadmill.  I open the GU Stroopwafel I have sitting in the cupholder and take a bite.  Eating and drinking while running is usually never a problem for me, but on a treadmill, it’s a test of balance and willpower.

At minute 89 and 30 seconds, I quickly hopped to the side of the treadmill to take a picture of my distance, just incase the treadmill shut down at 90 minutes, like so many gym treadmills tend to do.

At minute 90 and 1 second, I cheered (out loud even) over the fact that the treadmill didn’t turn off.   I’m so excited, I call Geoff over, and tell him to take pictures.  I’m going to blog about this.

He takes pictures in typical Geoff fashion: blurry.  I’m not sure how he manages to make every photo look like it came from a flip phone circa 2003, but it’s his talent, and I love him for it. 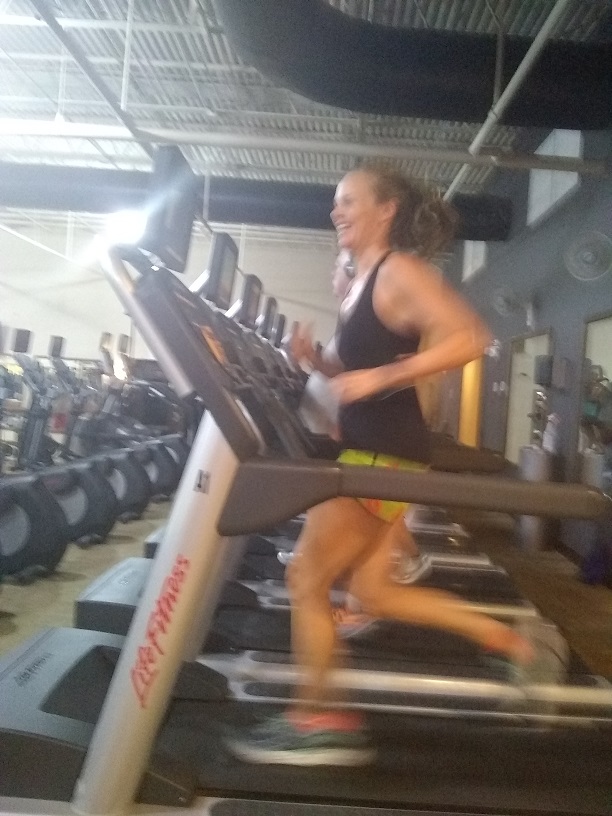 So fast, I’m a blur! Or my husband is bad at taking pictures. Same thing.

At minute 98, I nearly hit the front of the treadmill, as it decided it was time for me to cool down.  As I was grumbling, trying to quickly avoid cool down mode and restart the treadmill, a gym member nearby walked over to me.

“How far are you running?  I did five, and you are still on the treadmill.”

“Oh, uh, I just finished just about ten” (continues to forcibly push the up on the time button, to no avail), but I’m on here for three hours today.”

“What?  Are you training for a marathon or something?”

“Yeah, sort of…” (hits stop, hits start, tries to get the speed backup without loosing too much momentum) “I run ultramarathons.” (immediately feels like an asshole for sounding smug)

At minute 120 I marvel at how quickly 2 hours has gone by.   I also marvel at the fact that I’ve actually made it this far, on a treadmill.  I’m on a runner’s high. I start contemplating more treadmill feats.  Maybe a 50K!  Maybe 12 hours, fundraising for charity! I could totally do that!  Oh treadmill, why do people dread you?  You aren’t that bad.

At minute 122 I hate the treadmill again.  I scoff at how long another hour is going to feel. I eat more stroopwafel. 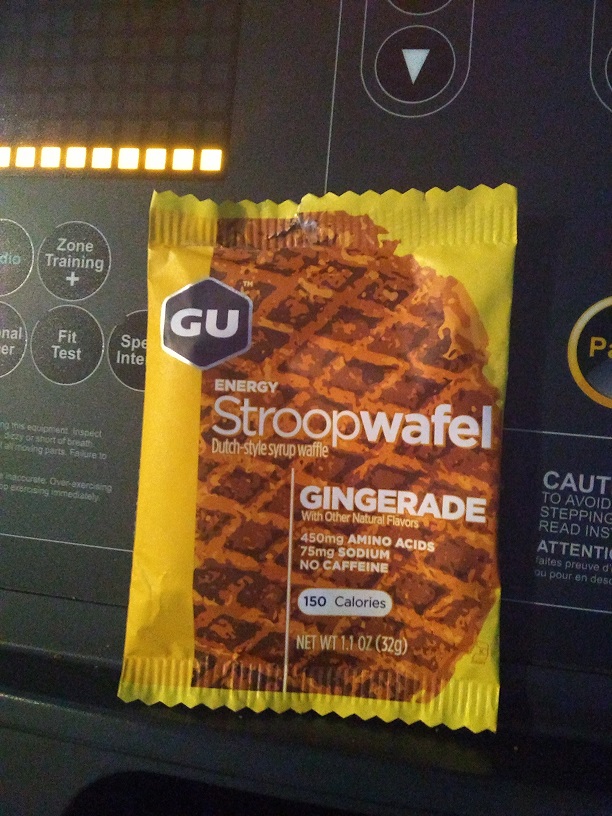 At minute 135 I start attempting to do math, and realize I’m not going to make 19 miles in the 3 hours I gave myself at the pace I was currently running (about a 9:41), so I decide to start picking up the pace.  I finish the stroopwafel.

At minute 165 I’ve worked my way up to 7.0 mph (8:34/mile) and I’m sucking wind.  I had spent a solid two and a half hours making sure I stayed in my aerobic zone (and was quite pleased that I stayed in Zone 1 for most of that).  All bets were of now.  Holy hell, this hurts.

At minute 172 I wonder if I’m going to fall off the treadmill.  But I want the last few minutes to go by fast, and for whatever reason, I’ve convinced myself that they’ll go by faster if I’m running faster.

At minute 180 and 2 seconds I hit the stop button on that treadmill and exclaimed out loud “THREE HOURS! I DID IT!” to which not a soul in the crowded gym even slightly turned their head.   Because a) everyone is lost in their Beats by Dre, and b) no one cares.

But if you’ve made it this far, and still care…

Hydration: Three (3) refills of a 23 ounce LIFEWTR bottle, the ones I pay way too much for, but they are pretty and I reuse them.  Water from the water fountain.

Miles: 18.4 (since my 30K course was not certified, we’re calling this close enough.)

Elevation gain:  6 inches (the climb onto the treadmill deck)

Bathroom breaks: One, and I made my husband guard the treadmill for me.

Likeliness to recommend a 30K on a treadmill to others:  2 out of 5 stars.

Lessons learned:  Do the hard things.  The stuff that you dread, the things you really would rather avoid.  They truly do make you stronger, and you never regret them when they are finished.