I always wondered at one point in my life I would hike up the proverbial big girl panties (my goodness, I loathe that saying, yet perpetually use it) and decide it was time to finally start taking care of myself. 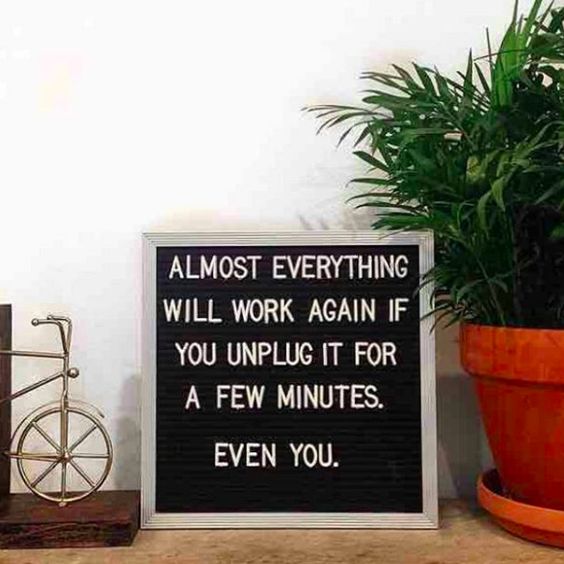 It’s Myrtle Beach marathon weekend here in town, something I’ve participated in more times than I can count (because I run out of fingers on my hands if I try).   Having somehow amassed the reputation of being a runner (I have no idea how that might have happened, typed in my best sarcasm font) it’s no surprise that over the last few days several people have approached me and asked me what distance I’m running this weekend.  The answer “I’m not running” seems to catch everyone off guard.

And not only am I not running the Myrtle Beach marathon, but I bailed on another much anticipated race this weekend: Conquer the Rock 50K, also being held tomorrow.

I’m certain at some point during the weekend, when the mountain view trail selfies and finisher’s medal Facebook posts come pouring in, I’ll feel that sharp twinge of jealousy, or “FOMO” as we like to call it in the endurance world.  Hell, the Myrtle Beach Marathon is quite literally the birthplace of my distance running career,  and I’ve run almost every year since 2005.

But at this moment, I only feel peace.

For YEARS I’ve been telling clients and friends to listen to their bodies.  But what does that really mean?

On the most superficial layer, it means if something hurts: stop.  One of the first things I teach new clients is the ability to discern discomfort from pain.  Discomfort is the oxygen sucking icky feeling that comes with doing a 30 second plank after having been relatively sedentary for a long time.  Pain is sometimes sharp and seemingly out of the blue, and sometimes it is a dull roar, either way it’s your body’s way of warning you that something is not right, and you should stop what you are doing immediately.  Discomfort is something we push through to become stronger, pain is something we avoid at all costs.

Only recently have I realized that listening to your body goes so much deeper than the obvious signs.

Muscle soreness that lasts a little longer than it should.  Pathetic mobility, paired with groans as you get up off of the couch. General fatigue and irritability. Persistent anxiety for seemingly no reason.  Rogue stomach pains or headaches. Having a hard time sleeping, or waking up in the morning.  Hangovers?  Definitely the hangovers.   All of that.

They are all small whispers from my body saying “Hey, Heather, it’s time. If you could start trying to take better care of me, that’d be great.”

And for years, I’d push through all of this, I’d ignore the groans, the dull aches, hell, often even the loud roars, because I’m “tough” and that’s just what athletes do.  I’ve birthed babies.  I’ve climbed mountains while nearly hypothermic.  Hell, I ran 100 miles with a freaking hernia popping out of my abdomen.  Feeling less than 100% doesn’t slow me down.

Until it began to slow me down to the point that I could not push through any longer.

Over the last three months, a few important realizations have started to light:

I am not an elite athlete.  I’m not making millions of dollars off of a 5-10 year span of athletics, where I can run my body into the ground for the sake of a massive paycheck and potential fame. I do, however, use my body to make a living.  But my career is hopefully a long one versus short lived, and I need to keep it healthy for as long as possible.  I am not an effective trainer when I’m hobbling around the gym with my Achilles tendon suffocating behind an ACE bandage, or barely able to keep my eyes open because of general fatigue.  I do not embody “leading by example” as a running coach when I’m DNF’ing races left and right due to ongoing injury.

Indulgences feel good short term. Healthy choices feel good long term.   Junk food tastes amazing.  A buzz from a warm glass of red wine while letting your troubles seemingly melt away feels incredible.  The high of finishing a race you weren’t properly trained for feels phenomenal.  But these feelings are not only temporary…they often come with negative and lasting repercussions.   Now, don’t get me wrong: I am a “life is short, eat the cake” girl through and through. But when you are constantly eating the cake (or drinking the wine, or running your body into the ground) these things are no longer indulgences, and are instead just shitty life choices.   Having the discipline to see the long term over caving in to the short term is hard.  But I’m learning it’s worth it.

PATIENCE is more rewarding than PRIDE.  This is an ongoing learning process in my life.   In the past, EVERYTHING in my world has been a competition: race times, board games, blog pageviews, yoga class, you name it.   Let me tell you how freaking hard it is for me to show up to a yoga class and get schooled by the little old lady who can effortlessly hold poses, while I quite literally fall over WHILE ALREADY SITTING DOWN (true story).  It’s hard to have your Ultrasignup course record taken away by a newbie who was undertrained and winging it, when you’ve been busting your ass at this for years.  It’s hard to hold your head up and work hard in the industry as a professional, only to see the inexperienced, unqualified person who was genetically gifted with 6-pack abs rake in the sponsor money and accolades.

Do I sound bitter? I do, hell sometimes I AM, and it’s OK.  That is exactly what I’m working on moving away from. I suppose recognizing it is half the battle.

I’m slowly (let me emphasize: slowly) learning that accepting where I am today, physically and spiritually, on MY journey is far more rewarding than meaningless bragging rights.  But let’s get back to the physical part: focusing on my weaknesses, and knowing that I simply can’t expect them to disappear tomorrow (or expect to hold standing hand-to-big-toe pose with the grandmas tomorrow) is not only empowering…

it’s kind of a relief.

I’m not running the Myrtle Beach Marathon this weekend.  Hell, I might not run anything for awhile.   My body has been screaming for rest for a long time now, and I’ve decided it’s time to heed to it’s cries.  I’m learning that sometimes in life you need to hit the reset button, and start all over again…and that’s OK.  I’m learning that slowing down and taking care of my body is so much more important than race medals, instagram photos, and bragging rights.

I’m learning that patience and respect are more than just words, they are purposeful practices.

And it only took 36 years to start to figure this out.

It's been quite a while since I've written a shoe review in these parts. I had fallen into a regular routine of ordering the exact same shoe model over and over, because why mess with what works? Alas, on a fateful day in New Jersey last October, I reluctantly put on a demo pair of Merrell Bare … END_OF_DOCUMENT_TOKEN_TO_BE_REPLACED

Alright brave readers, we're about to talk about my vagina again. As mentioned in a post two months ago, I'm suffering from what is known as a pelvic organ prolapse. I'm sure some of you may recoil at reading those words, but it's one of those shitty things that happens, frequently, and I'm not … END_OF_DOCUMENT_TOKEN_TO_BE_REPLACED

Coach Heather here, with a helpful post describing 5 ways to guarantee you'll hate running. I assure you that while the title may sound satirical, I'm absolutely serious with this post. (No really, stick with my sarcasm here...I've got an actual point to this post.) You see, I've made … END_OF_DOCUMENT_TOKEN_TO_BE_REPLACED