Life has gotten in the way of many things lately, blogging and running included. So after missing almost two full weeks of running, it was no surprise to me that I struggled a little on today’s semi-long run. Yes, a long run on a Monday. I told you things were a little crazy over here!

I planned for an 11 miler before my half marathon this weekend, but squeezed out 9 instead. My legs were sore (all of those squats maybe?) and in typical South Carolina fall fashion, it jumped from 65 to almost 80 degrees in the matter of an hour. I had been up since 5:00 am, drank too much caffeine, and taught a fitness class already. OK, enough with the excuses, but long story short, the run didn’t turn out *exactly* how I expected it too.
Which is not to say it was a bad run. Quite the opposite really.
Though I’ve been running on and off for just about 4 years now, it hasn’t been until this last year that I’ve made some progress on my endurance. I still marvel at the fact that I can run 8, 9, 10, 11 + miles without stopping. Not once. No walk breaks. Not that there is anything wrong with walk breaks, of course (shout out to the Galloway fans!) but I just get such a high off of knowing that I CAN run for 90 minutes straight without breaking stride. There was a time when I never imagined that possible. It still seems like yesterday that I ran/walked/stumbled/puked my way through my first post-baby-brand-new-runner mile.
Which makes me begin to wonder, what else is possible?

Or better yet, does impossible really even exist? I mean, sure, my 4 year old and I probably won’t ever take flight simply by standing in the living room flapping our arms as fast as we can (he’s pretty convinced lately that he’s *almost* there). But that didn’t stop the Wright brothers from building a plane. So again, I wonder, does the word “impossible” ever really stop us?

And during my run, somewhere between they “hey look at me go” and “ow, my legs hurt only after 7 miles, what gives?” I thought of my friend Tara. Or, ULTara, as we have nicknamed her. Tara is a running mom, just like me, just like many of you reading this blog. And while, like many of us, Tara runs 5k’s with her pre-school aged daughter in the jog stroller, her weekly mileage is probably a bit more than the rest of us. In fact, I’m pretty sure I’ve seen her top out at some weekly mileage higher than my monthly mileage. Yes, ULTara is an Ultra runner, and a pretty darn good one at that. She started last year with her first 50 miler, and this year has done her first 100 (Rocky Raccoon), second 100 (Lone Ranger, 90+ miles, I say close enough, haha) and third 100 (Heartland, 2nd place female! Read her report here) 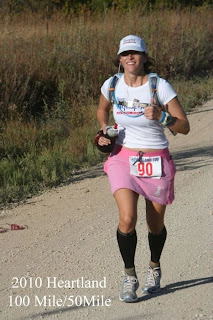 My sore knees hurt a lot less when I thought to myself “oh, your legs hurt? Run these 7 miles , and then run them 13 more times, and then you’ll see what hurt is. ” And then, when my brain tried to chime in with “pshh, that’s silly talk, no one runs for 100 miles” I quickly shut it up with, “oh yuh huh, yes they do! Tara does!” Forget Dean Karnazes, Tara is a real, tangible person (mom) I can wrap my mind around.

Which leads me to:
Tara IS a mom. Granted, a mom who likely has twice as many slow twitch muscle fibers as I do and a VO2max twice that of mine. But still, a mom, who does long runs around family time, or slaves away on the treadmill during nap time. A mom that truly makes me believe, that there isn’t anything you CAN’T do without a dream, determination, a lot of commitment and adequate training. I mean, 100 miles!! That’s unreal! Do you know how many times, in the “mommy world”, I have heard “oh well it’s so hard to find the time to workout”. Bull snarky. Tara proves that excuse wrong, and then some. Besides, are there really any valid excuses when you want something bad enough?
Nope. No there aren’t. You can run a 5k or you can run a 161k, if you want to. I really believe that.
And while I don’t have ANY plans to run a 100 mile race ever, or even a 50 any time soon (yes, that means that *maybe one day* has crossed my mind) for some odd reason, all of this came together today in my run and put me at peace. You see, I spent the whole year after Kain was born BURNING myself out to be faster, stronger, and, well, even faster. I burnt out, and I burnt out fast. And then this year, I started off with a coach who taught me that to go fast, you have to first go slow. And I HATED it, and then I got hurt. But do you know what? He was right.

So I realize, that while an Ironman still seems so big and scary right now, it is not an insurmountable goal, if I take it one step at a time. And I realize that while I may not get to Boston this year (heck, even if I ran a marathon fast enough, could I have registered fast enough? Did you hear it sold out in 8 hours?), and I may not get to Boston the year after, or the year after that. But one day, I will. And for once, that’s good enough for me.

Patience is a virtue, so they say, and the patience I’ve been developing lately is beginning to shine through in my running. And for the first time ever, I’m really , really excited for marathon training (Myrtle Beach, February, 2011).
I think I just had a zen-moment…
Happy running my friends. Reach for the stars!