If you’ve ever read any motivational and/or informational piece I’ve written regarding healthy living and creating an active lifestyle, you know that I preach time and time again to find something you love to do.  (Don’t worry, the soap box isn’t coming out today…or is it?)  Running isn’t a required part of exercise.   Hate the gym? Don’t go.   There are a bajillion (rough estimate) ways to become active, challenge your cardiovascular and muscular systems, and have FUN while staying healthy.   The key here is to constantly force yourself to step outside of that comfort zone in order to find things you enjoy.

If you don’t, you may never know what you are missing.

I really don’t (currently) like riding my bike.   I have this kick butt Kestrel Talon triathlon bike that I was lucky enough to acquire when some awesome people thought I would be a great addition to their triathlon team (HA!  No really, they are an amazing group, and I thank them for the opportunity, but who were we kidding…).  I’d love to say that I love riding this bike.   But I do not.

Though I had a thorough fitting, I still find the thing ridiculously uncomfortable.  It hurts my wrists. Hurts my lower back.  Hurts my …uh…lady bits. I’m constantly paranoid about stopping short and forgetting to unclip.  Or hitting some random shards of broken beer bottles, popping a tire, and flying head first over my handlebars.   And I’m terrified of traffic…specifically 18 wheelers and teenagers with cell phones.

And for the record: cyclists are worse than woman trying to “help” expecting mothers
by sharing their typically brutal and gruesome horror labor stories.  It seems everyone has either been or knows someone who has been hit by a car, bit by a dog, or been the victim of cycling hate crime via a 64 oz slurpee flying from a car window.

Alas, Ferdinand (that’s what I’ve named the Kestrel) is a beautiful bicycle, and I still aspire to ONE DAY do an Ironman 140.6 triathlon.  Plus that awesome boyfriend of mine loves to ride his bike(s), so in attempts to compromise and not run him into the ground (literally, we run a lot), I occasionally force myself to enjoy riding a few miles (I swear I try my hardest to shut my trap and not complain).

Last summer, in an attempt to try something different, awesome boyfriend took me mountain biking, on n a very wide, very flat trail. Your grandmother could probably ride this trail, yet I was terrified.  Fear typically leads to insecurities, and insecurities on a bike make you fall.  And over what is likely the only root on that entire trail, I crashed.   It wasn’t fun (though it was probably pretty funny) and I hadn’t been on a mountain bike since.

Fast forward to this week.   Awesome boyfriends equally as awesome mother offered to watch my kids AND let me borrow a mountain bike so I could accompany said boyfriend and one of his coworkers on a Tuesday night mountain bike ride (not on a flat, wide trail).  As you can gather, I probably could have thought of a thousand other things that I would rather do other than attempt to not kill myself on this ride.   However, since the kids are visiting, my workout time has seriously decreased (not a complaint, not an excuse, just a truth), and so has time spent with boyfriend.  So I graciously accepted.

And then secretly cried inside when he posted this on facebook:

But being one who (almost) never shies away from a challenge, I bucked up,  put on my bike shorts, and prepared to eat dirt. Probably a few times. 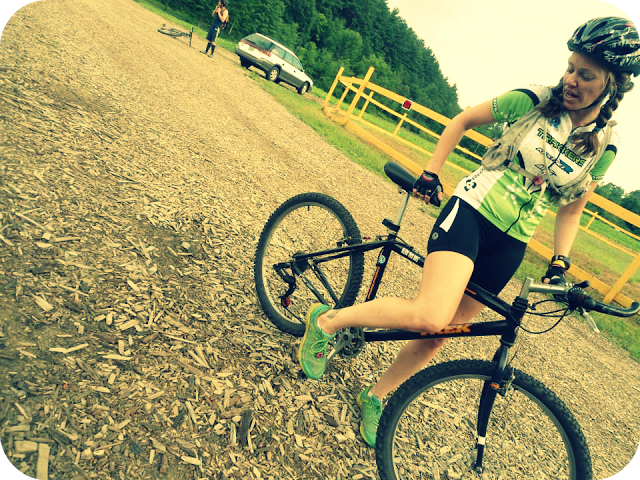 As we left the parking lot of our meeting place, I warned Ryan, the third member of this mountain biking voyage, that this was only my second time.   As I nearly fell twice in the first 500 yards (rounding a grass corner, and then again on the first barely-a-descent), he cautiously, and I’m pretty sure seriously, asked me “so wait, this is only your second time riding a bike…ever?”  I hoped it was sarcasm, but I was seriously that pathetic. I assured him no, I knew how to ride a bike, it was just this non-pavement thing that was getting to me.  But I kept going. 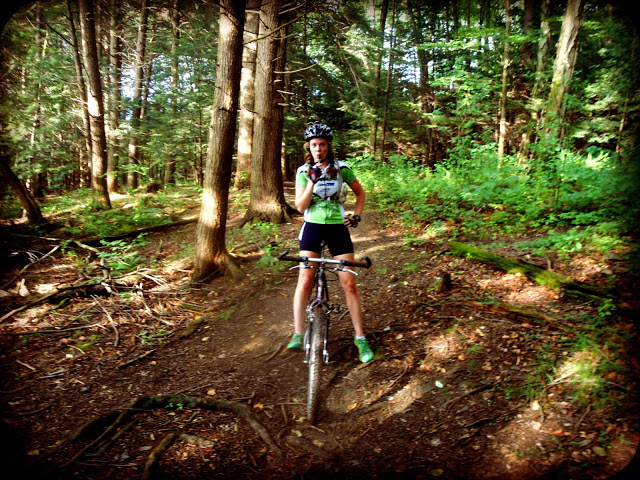 By the time our ride was over, about an hour and a half later, I was already scheming up ways of how I could trade in my tri bike for a mountain bike (any takers?), and totally kicking myself for not having given mountain biking a chance years before.

Now, to come full circle and to end my mini soap box lecture of the day:

Step outside of your comfort zone, and try something new.

Had I not, I wouldn’t have this new, fun sport that I may or may not be temporarily and mildly obsessed over (don’t worry, there isn’t another blog name change in store anytime soon).

Hate being crammed in a studio full of fitness dancers?  Skip Zumba.  Loathe swimming laps? Me too (yes, I’m sadly aware there is a bit of swimming involved in triathlon).  But the thing is, fitness can be found in so many places.   If you are a beginner, please don’t write yourself off if you simply haven’t found your fitness “love” yet.  Keep trying.  You never know what you may find.

In other words: your excuses are not valid here.  Be more, DO more.