I often wonder if a blog has a shelf life.

I also wonder if the blog world as a whole has an expiration date.  How many posts can there possibly be about “mistakes new runners make” or “tips for choosing running socks” (both topics that I…and 150,000 other running bloggers…  have already covered, over, and over, and over again) floating around on the internet?  When I started writing back in 2009, the blogging world was still pretty fresh and new.  The running mom bloggers were a small, tight knit community, and I knew (or knew of) ALL of them.  Now we are most definitely a dime a dozen, and the blogging industry as a whole is painfully saturated.   It has also taken a very different turn over the years, from something that resembled a public, online diary, to the format of a magazine: dozens of advertisements for products, with the occasional story or thoughtful written prose sandwiched in-between.  I certainly don’t mean to berate the for-profit blogging industry, it no doubt helped me to pay the bills for a few years myself.  I can’t fault anyone for hopping on that path.

I do promise that I don’t mean to sound so negative.  There are many bloggers who are thriving and still putting out incredible work.  But for me, nothing feels fresh anymore, and as such, I’ve seemingly lost my enthusiasm for writing.

I mentioned this on Facebook the other day, and garnered a few well meaning comments from friends.  Some suggested I write about very random topics, such as Betty White or the memoirs of my rabbit.  Others suggested that I revisit topics that I feel like I’ve already blathered about to near death over here.

So, I’ve decided to just go back to doing what brought me here in the first place: talking about myself, and MY running.  If nothing more, I know my mom enjoys keeping tabs on me this way.

Yesterday, while talking with a friend via Facebook messenger, he mentioned he was considering ending his mountain biking career because he’s been racing for 17 years and he’s feeling tired and beat up.  I responded that I’m on year #11 of racing (on my legs, not a bike, but you probably guessed that) and I’ve finally figured out how to NOT hurt myself.  As such, I spend my days lecturing my friends and clients about proper training (and avoiding overtraining) and almost always end my sentences with something like “trust me, I’ve made these mistakes so you don’t have to.” I’m pretty sure coach “H Bunny” (that’s the name they’ve assigned me) drives them crazy.  At least they are really good at holding back their eyeball rolling in front of me.

I’ve personally put in 120 miles of running this month, with 11 days left to go.

But it’s not the mileage that I’m proud of, per-se.  It’s the fact that every single mile has been carefully planned and run with a specific purpose.  I’ve been fortunate in my running career to be able to half ass everything I do.  I came barreling out of the gate 11 years ago with a 22 minute 5K .  Is that super fast in the grand scheme of things? No, but it’s certainly fast for someone who didn’t even think she could run in the first place, and was a speed worthy of a shelf of  age group trophies.  I pulled off a 1:40 half marathon with little training. I faked my way (albeit, slowly) through my first, second, third…hell, all 7 (8?) of my full marathons.   I even somehow pulled my first 50 miler out of my ass.

Trust me, I’ve tried, a few times.  I believed that sheer willpower and stubbornness would get me through…but they didn’t.   I know I have a handful of readers out there who have been shaking their heads this whole time, repeating “I told you so” under their breaths.

And so, after three “attempts” where I declared to the world that I thought I was going to run 100 miles, but stopped short at 52, 54, and 63 miles respectively, I finally realized that if I ever want to achieve this goal, I need to put serious effort into it.

I spent the summer and this fall building a serious base.  TransRockies preparation certainly helped keep me motivated.  And now here I am, with an actual training plan, that I’ve been dutifully ticking workouts off of every day (except for rest days, but I tick those off too.) I’ve avoided the all too common trend of racing everything and anything that comes my way, and instead put in the miles and the workout that is prescribed…nothing more, nothing less.  I feel strong. I feel healthy. I feel confident.    It’s certainly not very glamorous to sit on the sidelines for many months at a time while your friends are posting their latest race pics every weekend…but it feels good to finally have a goal that actually means something to me.   Well, means more than the other ones ever have.  And I’m certain that it’s going to be worth the wait, whether it be this year, or the next, or the next.

So that’s where I’ve been.  Running.  Turns out, I really enjoy it. (Who knew?)   Stay tuned, I’ll tell you more about it sometime… 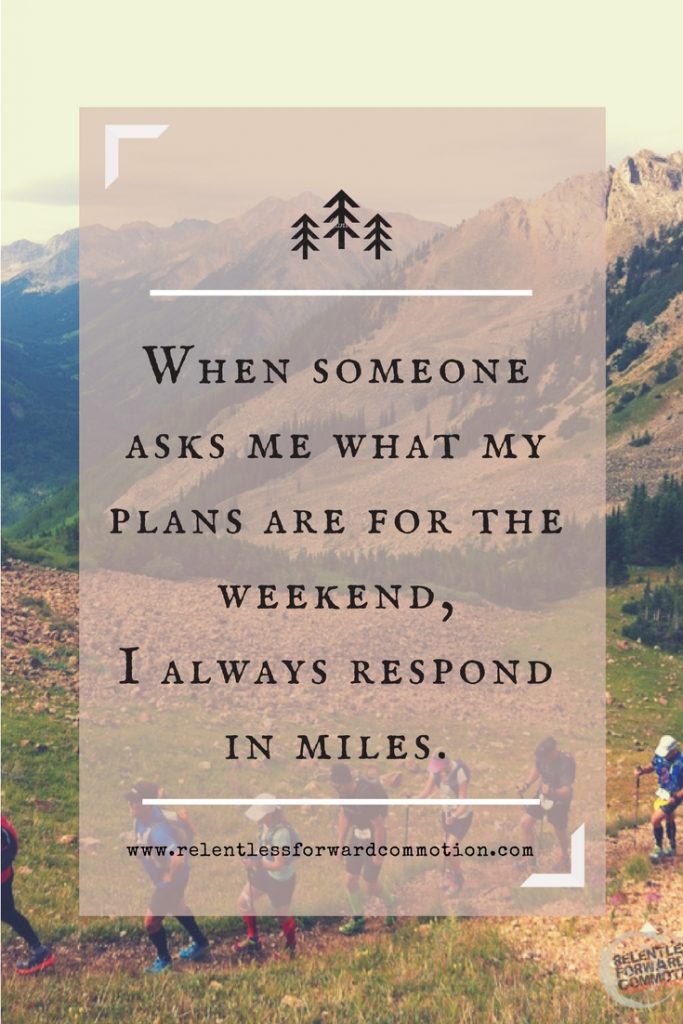