I’m a few days behind on the BadA$$ Mom’s Monday.  Life, kids, work, and stuff. You know how it goes. But let’s roll with it.   Because even though I have plenty more incredible moms to feature in the upcoming weeks, I also have a few non-moms.  So for them, I present to you today’s “Warrior Wednesday”. People who still inspire and amaze….they just haven’t (exactly) birthed little Spartans.

These two in particular have been very motivational to me.  One who is brand new to running in general, yet has made his mark in the social  (seriously, everyone knows this dude) & social media aspect of this sport .  And a Spartan Chick who just won’t quit… and as a result, has been sweeping overall and age group wins left and right.
MATT 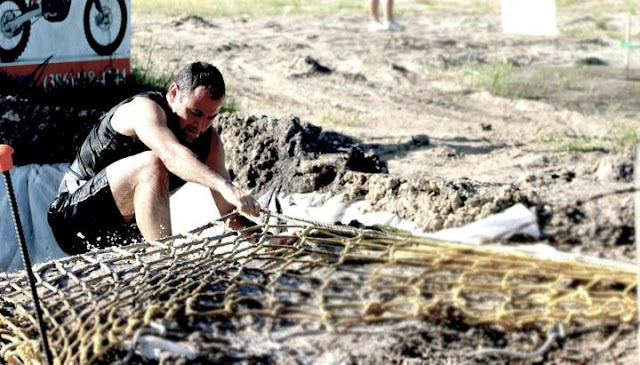 Matt B Davis of Atlanta, GA may not be a mom, but he is a dad, to daughter Emma, age 5, and son Jaxson, age 3.  I had the pleasure of spending time with Matt as a fellow volunteer at the Death Race this year, and of hearing his inspiring story on how he has gone from couch to soon-to-be- Ultra Beast athlete in just a matter of months. 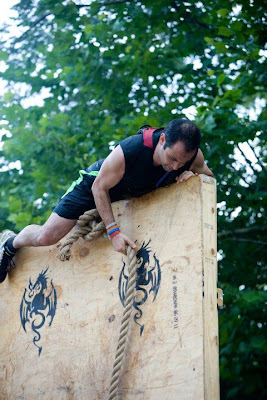 So what inspired it all?

“I seem to have the same story as everyone in that the Warrior Dash of 2010 was technically my first mud run. (I did that with zero training).  However, my real story began in December of last year when I started training for a Tough Mudder. A few months before a friend of mine told me that one of his goals for 2012 was to run a Tough Mudder. I had seen the videos for Tough Mudder and was a little frightened to do one. My thought was that if he could do it, I could do it, so I registered. My friend and I then got a team of 10 to do it with us since Tough Mudder seemed to focus a lot on team work. We did the event and despite miserable 20 degree weather, I felt a huge sense of accomplishment and had a blast doing it.”

Matt says his wife is 100% supportive of his training and racing.  “She goes to the gym almost every day. So when I started running, she understood the benefits and why I want to do it all the time.”

But the big question (for moms AND dads):  What about the kids?  How do you find the time to train?

“I will answer this question by stating that the biggest lesson in fatherhood I got from a friend of mine who said “It is so much more about quality that quantity”. He told me that he has to work and travel a lot. He also has several  volunteer and personal commitments. He said his solution was not “quit everything and spend more time at home”. If he did that, he would be miserable and that doesn’t serve anyone. So when he is home with his wife and kid, he gives them 100% of himself.

I have taken this on and agree whole heartedly. I believe in having it all. I don’t believe you have to give up personal time to be with family, or give up exercise to work or vice versa. When I walk in my front door after work, I leave work at the office. I never walk in the door with the phone to my ear. Then I can be home and give everything to my wife and kids.  I also make sure my wife has time to do the things she wants to do.  She too has an active, social, exercise, and volunteer calendar. We have to do some tricky calendar navigating, but it always works out.  When its time for a run, I go do that and they send me off with a smile, knowing it makes me so happy as it has become such a big part of my life. As the kids get bigger, I will ask them to join me on a run, hopefully they will.”

Matt’s future goals in obstacle racing include doing well in the upcoming  Ultra Beast, especially in his age group. He also wants to complete a Spartan Trifecta this year. In 2013 he will do his first 50 miler and sometime after that, wants to tackle a 100 miler.

Matt’s advice for those looking to do an obstacle race?

“The only way to get over your fear is to clear your calendar and plunk your credit card down and register. The minute I registered for my first Tough Mudder, it changed how I looked at it.  It forced me to start training no matter what.

Find someone to run with. I lucked out and my neighbors saw me running in my first week so he and I ran together a lot, then he decided to do Tough Mudder with me. Having someone to run with made a huge difference. I am sure there were days when I got done working that I would have skipped it, but knowing I had to meet him at 6pm made me accountable. Now I love it, so you can’t keep me away!

The best piece of advice I have heard regarding these events, is to “run your race”. Its so easy to get caught up in “Why am I walking and all of these people are passing me” or “I will never catch that guy”. On race day, listen to your body and run your race, don’t worry about anyone else. As Spartan says “You’ll know at the finish line”. I take that to mean you’ll know if you gave your best, and if you didn’t, you’ll see the gaps and where you can improve.”

You can follow Matt’s training and adventures on his blog, Matt B Davis Runs .  And be sure to tune in to his weekly podcasts, where he talks all things obstacle course and mud runs. 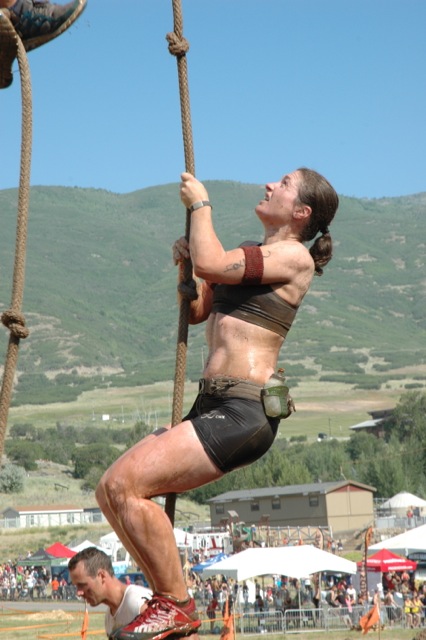 If you know anything about mud runs and obstacle course racing, you know that face.  Margaret Schlachter of Killington Vermont, the chick behind “Dirt in Your Skirt“.  Sure, she may not be a mom, but she still has to balance training with life in general.  And not just training, but training to win.  Margaret squeezes in her workouts where ever she can. Who else do you know who throws spears in their backyard first thing in the morning over a cup of coffee?  This chick is not only bada$$, but she has been an AMAZING cheerleader to both brand new racers and elites alike, especially in the Spartan Chicked community.

I asked Margaret the same question I’ve asked everyone else: how long have you been running?  And her answer, as a stellar athlete, totally surprised me.  “Believe it or not last year was the first year I really started running. I had been a ski racer and lacrosse goalie in high school and college but had switched to coaching and hadn’t train myself seriously until about a year ago. When I was a kid I did a 5K and did a duathlon once post college but mostly obstacle racing got me running. “   And her first obstacle race?  “May 2010 – Spartan Race. It was the first Spartan Race and my first obstacle race. I have been doing it since then. I randomly decided to give it a try because of a friend “liking” it on Facebook. It was total chance that I started racing” 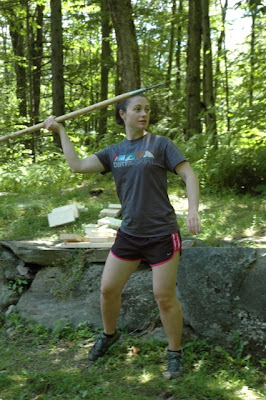 Margaret may not be a mom, but she still has a family.  What do they think of her obstacle course racing?  “At first my family didn’t know what to think! My mother went to a race and watched and actually now is talking about giving one a try herself. They are extremely supportive of my endeavors. I recently became the first professional female obstacle racer and my family has been extremely supportive of the decision. “

As the first professional female obstacle racer, what are Margaret’s future goals in this sport? “Since turning pro am focusing my attention on racing. I plan to stay in the top ten in the World Rankings for Spartan Race and hope to finish out the season top 5 in the points. I hope to have a race this season as well burpee free!”

Her advice to newbies ?  “To anyone who is looking to start obstacle racing and on the fence. Sign-up and think about it later. Obstacle Racing is the first sport I have done where your toughest competition actually cheers you on at the same time. You can do anything if you put your mind to it! It’s just taking it one step at a time. “

You can follow Margaret’s racing, as well as find some stellar training tips, on her blog, Dirt in Your Skirt