Oh, the things you see, running down the street in the wee hours of the morning in a vacation town. While I’m getting my Saturday started with a nice run, many are still ending their Friday night. It’s kind of funny.

There was the guy sleeping in his car, in the driveway of a beach front house (just short of being called a mansion). The yard was littered with beer cans and those infamous, red plastic cups, letting you know that there was a keg, and more than likely a beer pong tournament. Hope they clean up before mom and dad come home !
There was the limo that slowed down to honk, and I got a few yells from what appeared to either be the end of a bachelor party or a bunch of golfers heading to a very early tee time. Again, in this town it’s often hard to tell the difference, haha. Gotta love it.
Young people driving by in convertibles (I hope that was a designated driver!) dancing in their seats and singing at the top of their lungs to blaring music.
As the sun started to come up, I was on a stretch of Ocean Boulevard where there are no houses or hotels on the beach front. I had a beautiful view of the Atlantic, doing it’s thing. I had to laugh. Five years ago, the only way I would even dream of seeing the Ocean at this hour was if I was checking the surf for some decent waves (and even 6:30 am would have been pushing it!) or if I was in that convertible, winding down from a fun Friday night. Denny’s for breakfast, chug a water, pop some Tylenol, and sleep until 6:00 pm just to get up and do it again.
It’s funny how quickly life changes.
I thoroughly enjoyed this morning’s run. I said good morning to every dog walker and runner I passed. Waved at every cyclist, even the little “Myrtle Beach peloton” that rode by. I even smiled at every cat, bird, and tiny rolly polly bug I passed (I know, how very Snow White of me!). I was just in a good mood. 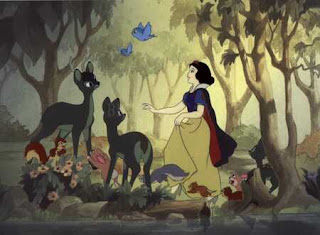 I was trucking along at a slower pace of around 9:00-9:20/minute , and mile 4 reached me before I knew it. I stopped for today’s experiment: Hammer Gel from Hammer Nutrition. Hammer Gel is all natural, with no added refined, simple sugars and no artificial colors or sweeteners. Supposedly the extra sugars is what causes GI problems for a lot of people, so I had high hopes this would be “the one” for me. Turns out not so much….maybe. 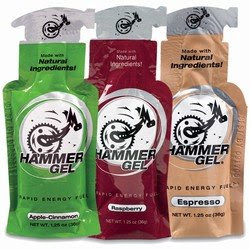 First of all, the taste: I give it a B+. I used Apple Cinnamon flavor. Now, Carb-boom in Apple Cinnamon is my all time #1 favorite sports gel taste wise, but I’m afraid it’s also the worst on my stomach (will experiment more in the future). Hammer Gel Apple Cinnamon comes in a pretty close second taste wise. Zero gagging on this product. I washed it down with plenty of water and was on my way.
I made it about another 1.8 miles when my stomach started flipping out. I was gassy, and felt like I might toss my cookies right then and there. This feeling came and went for the rest of my run. I was cursing out the hammer gel until I remembered what I ate for breakfast. I’m almost embarrassed to share, haha, but in a moment of tired weakness (it was 5:00 am and I could hardly see straight) I ate *coughcough twopowdereddonuts cough** Oops. So the GI problems may or may not have been the Hammer Gel.
As any 5th grade science class student would tell you, this was not a valid experiment. So I will give the Hammer Gel another shot, without the trashy breakfast next time (why did we even have those in the house anyway??) I WILL say however, it did give me plenty of energy. I never once felt tired in that “I really need to eat my blood sugar is crashing” sort of way. I continued on saying hi to all of the dog walkers and pill bugs with a smile on my face.
Around mile 8 my legs started to HURT. Looks like it’s time to get serious about adding my plyometrics and weight training back into my weekly plan. I know they will make the world of difference there! All in all I finished 10.25 miles in just over an hour and a half.

And so, the marathon training & nutrition experiment continues. But might I add for probably the 5th time on my blog, that i just LOVE nuun? Love it! It’s doing wonders for my running! Especially for this hot, humid, summer training!

Hope everyone has a fantastic weekend!

« but there was no GU, only ice chips…
"Racecation" – Ironman USA & Lake Placid »

Welcome, new friends. I am hoping this Learn to Love to Run program for beginners is the answer to running that you've been searching for. My name is Heather Hart, I am an ACSM certified exercise physiologist and full time running coach. I've worked with countless beginners and experienced … END_OF_DOCUMENT_TOKEN_TO_BE_REPLACED

Take a seat friends: today we're going to discuss the benefits of strength training for runners, and why you need to add some weights, or incorporate body weight resistance exercises, into your training. I can hear the collective groan from the endurance crowd. Listen, I get it. The … END_OF_DOCUMENT_TOKEN_TO_BE_REPLACED

What a time to be alive, am I right? I say that both sarcastically and seriously. I don't know about you, but for the last 15 days my thoughts have continuously fluctuated from calm, to concern, to confusion, to fear, and then back again. I'm in disbelief about the world around us right now, … END_OF_DOCUMENT_TOKEN_TO_BE_REPLACED