Hot tears stung my cheeks as I put the cheese doodles on the register counter.   They were our brand, Wise Puffed Cheese Doodles in the orange bag that always reminded me of Fred Flintstones caveman outfit for some reason, even though the pattern on the packaging that reminded me of this had been gone for years.  I was glad the first gas station I stopped at had them, I didn’t want to have to make multiple stops for the right ones…though I would have.

It was 9:45 am.   I got the call around 9:09 am.  No, technically I missed the call at 9:09 am, and when I glanced at my phone and saw that it was my mother, I knew exactly what it was about.   Reluctantly I called back.  It was time, she said.  I didn’t have to be there, she said.  But before she could say anymore, I interrupted her and said I was on my way. I had to say goodbye.   I knew this moment was coming.   For months now, we all knew this moment was inevitable.   His body was deteriorating.  His legs stopped working.   It was time.   But I didn’t accept that reality until I picked up the bag of cheese doodles.

Zeke came into our lives the summer of 2000.  I’ll never forget my parents and sister pulling up into the driveway with the most awkward looking puppy I had ever laid eyes on.   Bold black and white patterns on his fur  and bright blue eyes in true husky fashion, with gangly long legs and huge puppy feet.    His tail didn’t curl the way most husky tails did, and nothing about him was handsome or regal looking.

He didn’t like me from the start.   He would nip at me and bark at me, never giving me the same puppy love he gave to the rest of the family.   But I didn’t care…I was heading off to my freshman year at college in a few weeks anyway, so there was no sense in bonding with the finicky puppy. 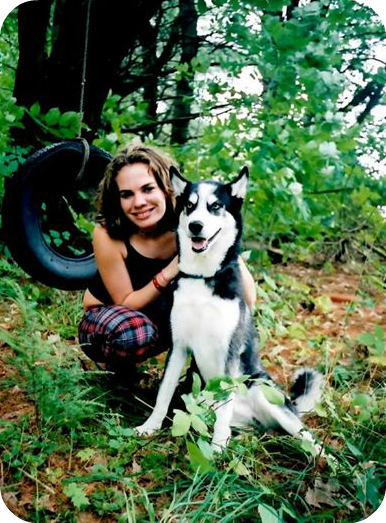 Zeke and my little sister Cathy.

Every vacation or weekend home, there he was, shedding his huge clumps of husky fur all over my stuff.    He barked and “talked” all of the time, another infamous husky trademark, I could never get him to shut up.  He got into porcupines so often (in fact, twice in one weekend) that we couldn’t let him out alone, so my time home was spent catering to Zeke’s needs.  In, out, in out, all day long.  His breath was constantly atrocious.  He would bark if he wanted your spot on the couch.  He would bark if your feet were in his way.   This dog was a “diva” in every sense.  And the ONLY time he was ever nice to me was when I was eating something he wanted a bite of…his favorite snack being cheese doodles.

But it’s hard to not bond with someone your mother would eventually start referring to as your “younger brother”.

This morning I sat on the living room floor of my parents house with Zeke.  He couldn’t see me, could barely hear me, and  he hunched over with his back legs twisted, it was too painful for him to sit down.    But he knew the smell of his cheese doodles, and as I fed him one after another, the memories came flooding back.

After the first few, he initiated the “helping himself” phase…

The summer after my sophomore year I got my first waitressing job at a local fine dining steak house.  Without fail, someone would order a massive slab of prime rib and eat less than 1/4 of it, so almost nightly I would bring home the leftovers to Zeke.  It got to the point where no one could walk into the house with a Styrofoam take-out container without Zeke immediately drooling and assuming it was for him.

Every single Christmas, Zeke knew exactly what day it was.  He would be the first to run to the pile of stockings full of gifts, digging for his own.  Once he found it, he would bury his whole head in the opening of the stocking, pulling out his gifts one by one.  It wasn’t until they were all out that he would stop and decide which to chew on or play with first.

When he and I were both much younger, I would run up and down the hallway of my parents house, flinging myself through their bedroom doorway and jump onto their bed, Zeke right at my heels, barking like crazy.  Up the hallway, down the hallway, bounce off the bed, repeat.  We would do this over and over until Zeke got so worked up he would instinctively bite me.  I don’t think my parents ever quite understood why they would come home at the end of the work day to find their pillows and sheets in utter disarray.

He used to get a kick out of stepping on cats.  We had quite a few over the years, and it didn’t matter to Zeke.  If a cat was laying on the floor belly up, Zeke would playfully stomp on the cat until it squeaked.  Fortunately, the cats never seemed to mind.

Years and years later, I ended up moving back in with my parents for about a year.  In a new home and a new city, Zeke was absolutely NOT allowed outside on his own, or he would immediately sprint away, and almost always get caught by the city dog catcher.  After bailing him out of “doggy jail” too many times, we were always on high alert as to leaving a door open.   One afternoon while I was home alone, there  was a knock on the front door.  It was a little girl from down the street.

“Ummm, is your dog missing?” she asked me.
“No, he’s not.” I replied matter of factly.
“Ummm…are you sure? Because I think my mom just caught your dog.”
Absolutely sure he hadn’t gotten out, I followed the little girl a few houses down just to appease her.  Imagine my surprise when I saw her mother standing at the end of the driveway, hanging on to a wriggling Zeke’s collar.

Zeke was always such a hellion, but he was ours.  And 14 years later, it was time to let him go.

We sat on a blue blanket on the floor in the middle of the exam room.  I mostly held it together until the vet asked if we had ever witnessed a euthanasia.   He kindly and gently told us what to expect, though I don’t think I actually heard what he was saying.  I just stared at Zeke and wondered if he knew what was about to happen, my tears flowing uncontrollably.  Whether he knew or not, he was incredibly calm, and he left us more quickly and peacefully than I could have ever imagined possible.

As I bent down to kiss him on the snout one last time, I could still smell the cheese doodles on his breath.

You were the best little brother I ever had.  Rest easy, our sweet Zekey.