I often experience many cathartic and/or “Eureka” type moments while out on the trails.

I also tend to write a lot of blog posts in my head while out on the trails.  Many of which are never published, because I forget about them before I return home.  I haven’t quite resorted to running with a voice recorder – yet – but it has certainly crossed my mind.

Both of the above typically occur during training runs. Rarely do I experience these thoughts during a race.  But as I’m sure you can guess by the intro…I had a cathartic, “Eureka” type moment during a race this weekend.

But let’s back up a bit.

Four years ago, when I was roaming through the mountains of Vermont, the running group I had left behind here in Myrtle Beach decided to start a friendly competition with another running group just North of the North Carolina/South Carolina border.   The Grand Strand Running Club would battle against the Wilmington Road Runners Club for the title of…well I’m not sure what the title is.  It was a battle for the border.  Or Border Battle. I keep getting it mixed up.   Anyway, the battle itself would be a 4 – 5 mile off road race, scored cross country style, held at a farm that quite literally sits ON the NC/SC border.  (Indigo Farms in Calabash, NC, to be exact)

Last year, Geoff and I participated in the Border Battle, mere weeks after we moved back to SC, and the heat nearly destroyed me.

This year, I’ve been training my tail off in this heat, exclusively on trails, and figured I’d destroy my time from last year. Though the course was slightly longer this year, and significantly cooler thanks to a rain storm before the race and overcast skies,  I was nearly four minutes slower.

But let’s get to the story.

We line up for the start. We wait, and we wait, and we wait.  Eventually a member of our club, who happens to own a timing company and is normally the person who says “GO”, pushes his way through the crowd up towards the front and says “uhhh, you guys aren’t waiting for me, are you? Because I’m running this year. Someone else has to start this thing.”   Apparently we were waiting for him, and it was pretty hilarious that he in turn was waiting for the start of the race.  I guess you had to be there, but I for one got a huge giggle out of it.   The bullhorn is handed to a volunteer, who hands it to another volunteer, who sheepishly says “uhhh, runners take your mark…GO!” and we are off. 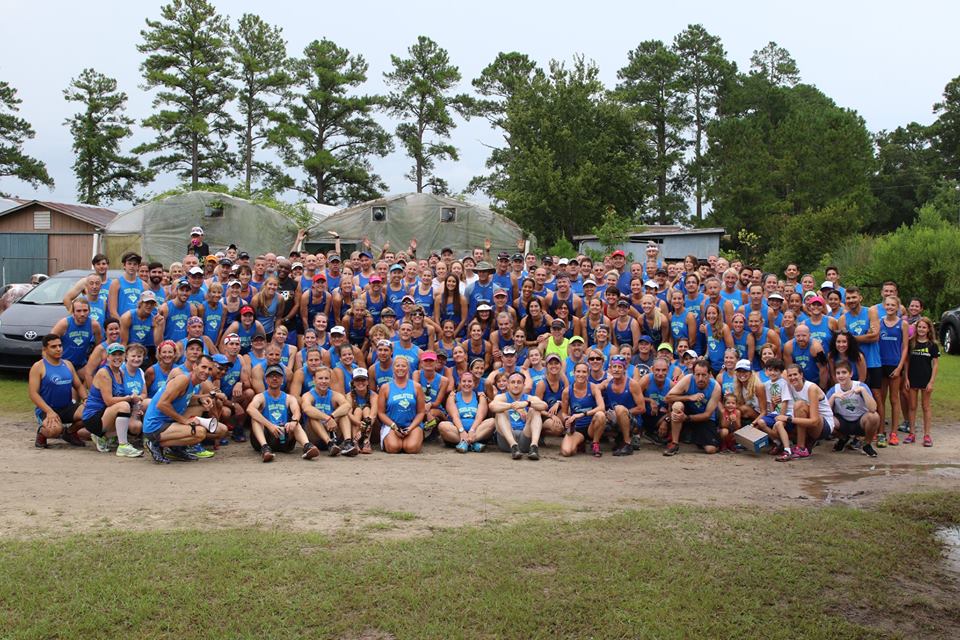 Both teams together. We apparently decided to wear the exact same team colors, so you can’t really tell who is who. It made the competition more fun. Photo credit Drew McCrary

Everyone takes off  through a field, past some goats and chickens,  and I of course started out too far in the front.  It wasn’t a classic rookie mistake so much as I just wasn’t paying attention to where I seeded myself.  One day I’ll learn.  The course itself constantly switches between two terrains: grassy fields and dirt roads.  The grass in the fields is relatively trimmed, but there are divots, holes, and tractor tire marks everywhere.   The dirt roads are your typical backwoods roads split into three sections, the left tire mark (dirt), the center (grass, usually raised slightly higher due to lack of travel) and the right tire mark (dirt).  Both situations are relatively difficult to navigate, especially through crowds (there were about 200 of us out there between the two teams).  But they aren’t pavement, and so I’m one happy girl. 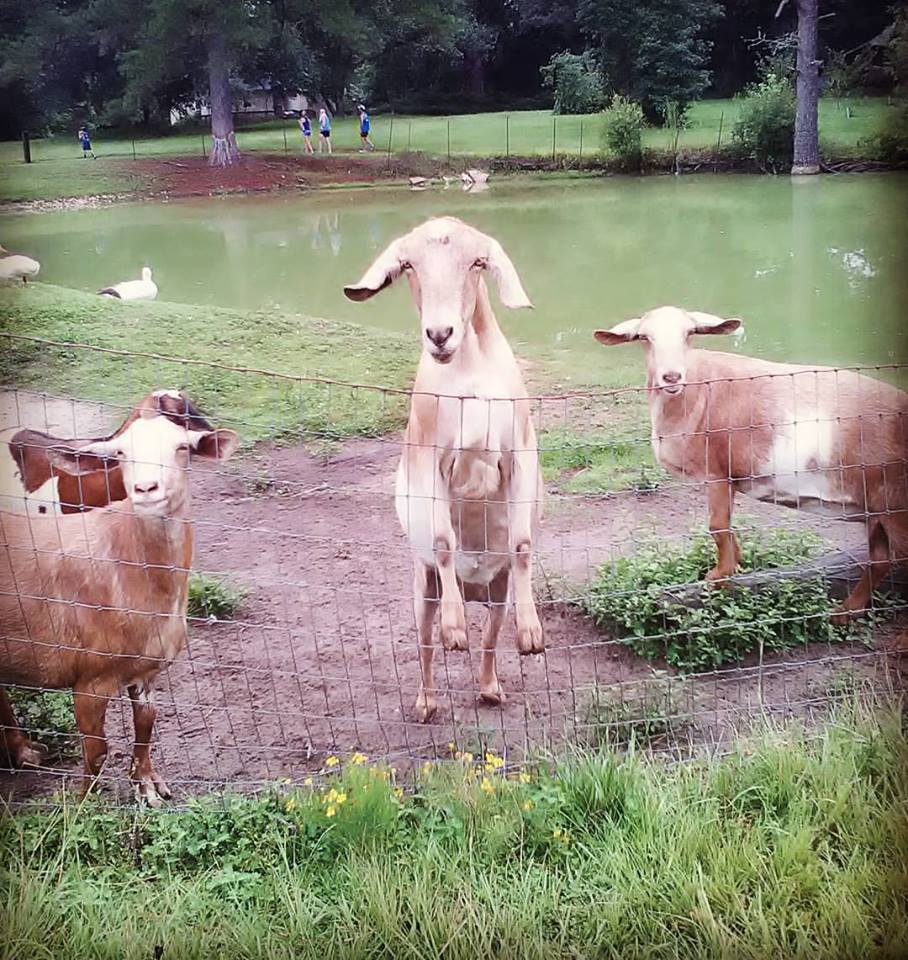 There were a ton of animals at the farm, including these curious goats.

I tell myself I’m running the first mile conservatively, but probably run it a little too fast anyway.  8:16/mile, according to the guy in front of me with a GPS watch (you know I don’t bother with those things as of late).  Whether or not that time was exact, I’ll never know.   My legs felt sort of fast.  My body was tired, but I convince myself it’s because I was still warming up.  I decide to try and pick up the pace for the second mile…

…and then almost immediately change my mind.

We had left another field and entered a beautiful stretch of dirt road through the forest.   My heart was urging me to slow down and take in the scenery.  I’m sure this is a classic case of “you don’t know what you’ve got till it’s gone” combined with “the grass is always greener”, but ever since we left Vermont, I cannot get enough of being surrounded by trees.  I LOVE being in the woods.  It’s my happy place, my peaceful place, and after a pretty emotionally rough day/night just a few hours prior, I needed some peace and happiness.

But my brain, always the logical one, was sternly shouting “this race is not about you, it’s about the team, so quit frolicking and RUN damnit.  DO YOUR PART! “.

About that time, my friends husband ran by, easily passing me, and said “Hey Heather, how is going?”  I couldn’t help but wonder if his concern was over the fact that I was so easily passable so early in the race. I  replied something along the lines of “GREAT!  Just enjoying the scenery! It’s so pretty out here!”

Clearly, the heart had already won this battle.

I’ve often joked (perhaps somewhat seriously) that I don’t know when I can officially call myself an “ultra runner”.  I’ve put two 50K’s, two 50+ milers, and a 100K under my belt in just the last year alone.   I’ve got a 118 mile stage race in just a few weeks, and another 24 hour race on the calendar, with my sights set on completing 100 miles hopefully in the near future.  I’m training my tail off towards that goal.  But I’m still new in this sport, and don’t consider my relative inexperience worthy of the title “ultra” runner.  Silly, I know, but it’s how I feel.

But out there in the woods this weekend, it hit me pretty hard: I’d way rather run 100 miles than push that painful lactic threshold,  running with my head down, only concerned about beating other people, for four miles.   Not that there is anything at all wrong with the latter, it just seemed much, much more miserable to me.

People passed me left and right, and I didn’t care, for the first time ever in a race like this.  That inner competitive voice I’ve talked about countless times on this blog?  She never even uttered a whisper.

The next few miles were a battle for the border, and a battle of my internal wills.  I had showed up to that particular race with a purpose, to put down a good time to help my team win the title of fastest team.   But I just wasn’t feeling a fast pace that day, I was physically and emotionally drained.   So I alternated a “push hard, but not too hard because you still have a ways to go” pace with a “don’t do anything stupid, you have a really, really big race in two weeks and there are a lot of places to turn an ankle out here” pace, until I finally reached the finishing stretch. 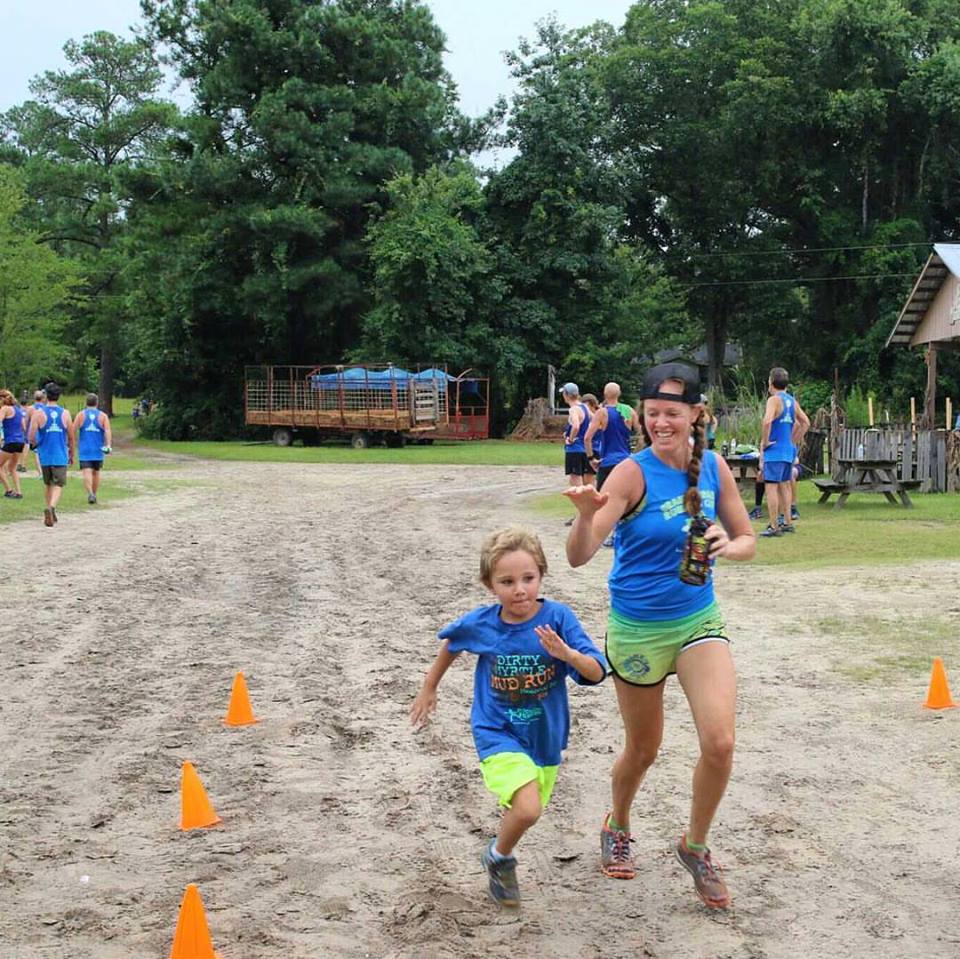 I was given a popsicle stick that said I was the 28th female.   40:02 was my finishing time. Which is really not fast (for me.  But you know how I feel about comparing paces.)  Both of my kids corened me at the finish, talking a million words per minute, and all I could do was drag them along with me while I tried to walk off the “I just sprinted the last 100 yards” pukey feeling. 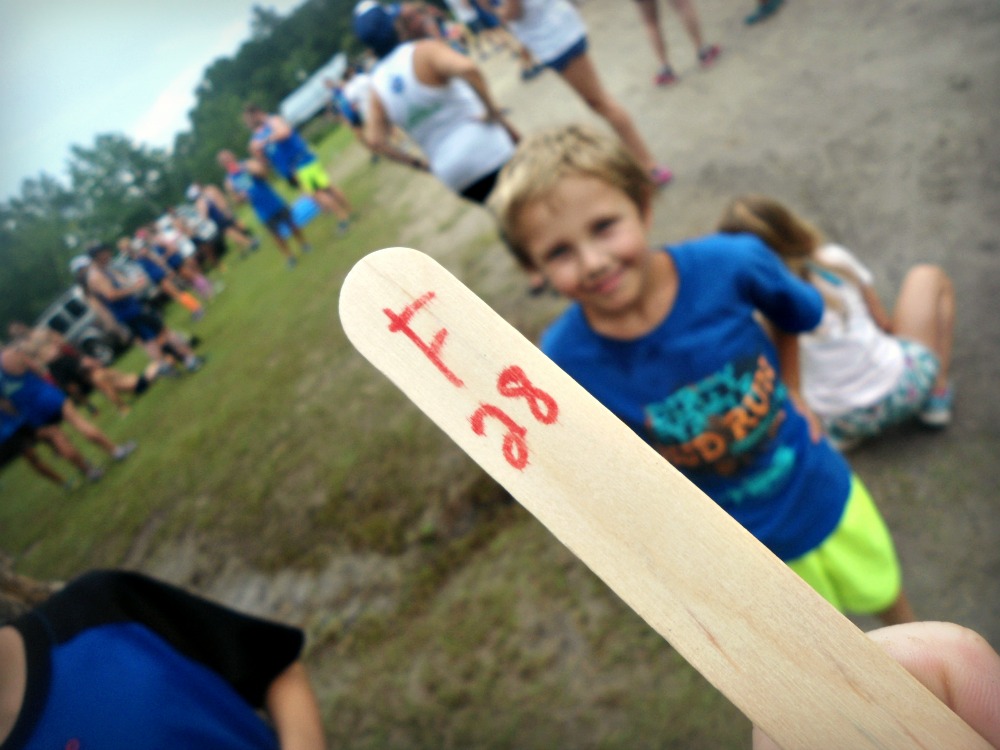 My 9 year old told me I did an awesome job.   And truly?  That’s all that mattered.

I wonder if I’ll ever get that competitive drive back.  I wonder if I’ll ever show up to the start of a 5K, pacing around nervously and eyeballing my competition up and down.   I wonder if there will ever be a point where I’m screaming at myself inside of my head, trying to hold on tight to first, or second, or third place, as I’ve done so many times before.

Or maybe I’ve come to a point in my life where my new form of competition is me against myself.  Can I push that one more mile, when I’ve been on my feet for 20 hours already, and want nothing more than to desperately lay down on the trail and close my eyes?

Or maybe the word “competition” has left my running vocabulary all together.  Perhaps the free spirited side of me who can’t stop smiling while running through the woods, and wants nothing more than to explore the world via her own two running shoes, has taken hold of the compass.

I don’t know.  And I suppose it truly doesn’t matter.  But I will say that there is a large part of me that felt relief that the competitive voice never reared her (sometimes bitchy) head.  Nor did the internal shame that usually spouts off something like “why didn’t you train harder/try harder/run faster” etc.

I do believe a new chapter has started in Heather’s book of running.  I’m excited to see how far this one takes me…

Oh, and incase you were wondering…our team won the fastest men’s category, the overall fastest category, and the largest team category. Wilmington won for the fastest women.  I suppose I’ll shoulder a little blame for that.  But not too much.  Thank you GSRC, WRRC, and Indigo Farms for a wonderful morning.  I don’t spend a ton of time on the roads these days, but I’m happy to be a member of the Grand Strand Running Club family none the less.