Alternate title: “It’s not an adventure until you get lost.”

Sunday morning my parents scooped up the kidlets to bring them on the type of adventure that I remember as a kid myself: road trips to antique shops with a stop over at (great) Grandma’s house.   This left Geoff and I with the opportunity to get in some quality training.  Despite the fact that we have more than a handful of pretty intense races coming up over the next few months, we chose to train for the event that is the furthest out on the race calendar: our first GORUCK.  Insane mountains of Spartan races be damned, let’s ruck around with some bricks!   We’ll regret this soon enough, I’m sure.

A few days ago, a brand new ruck sack arrived in the mail, a wonderful gift from my Geoffrey who is indeed more of a gear junkie than I am, if you can believe it.  We were going to give the highly recommended LA Police Gear 3 Day Pack a try, as the $29 price tag was FAR more affordable than the GORUCK branded rucks.   Sadly, even on the tightest fit, it was still too big for me, so Geoff was stoked to give what is now his new pack a try.  Four bricks, a yoga block, and 2 liters of water in my osprey for me, 10 bricks, a giant rock, 70 oz of water, and probably a cat and the kitchen sink in the new ruck for Geoff, and we were off to carry heavy things through the woods.

We headed to a popular trail in town that we had never been to before.  Of course, we got lost finding  the place (this would be the theme for the day), but Betty the GPS saved us, and soon enough we arrived to the trail head.   We had thought about printing a map earlier that morning, but the printer didn’t work, and the trail seemed easy enough, so we were going to wing it. 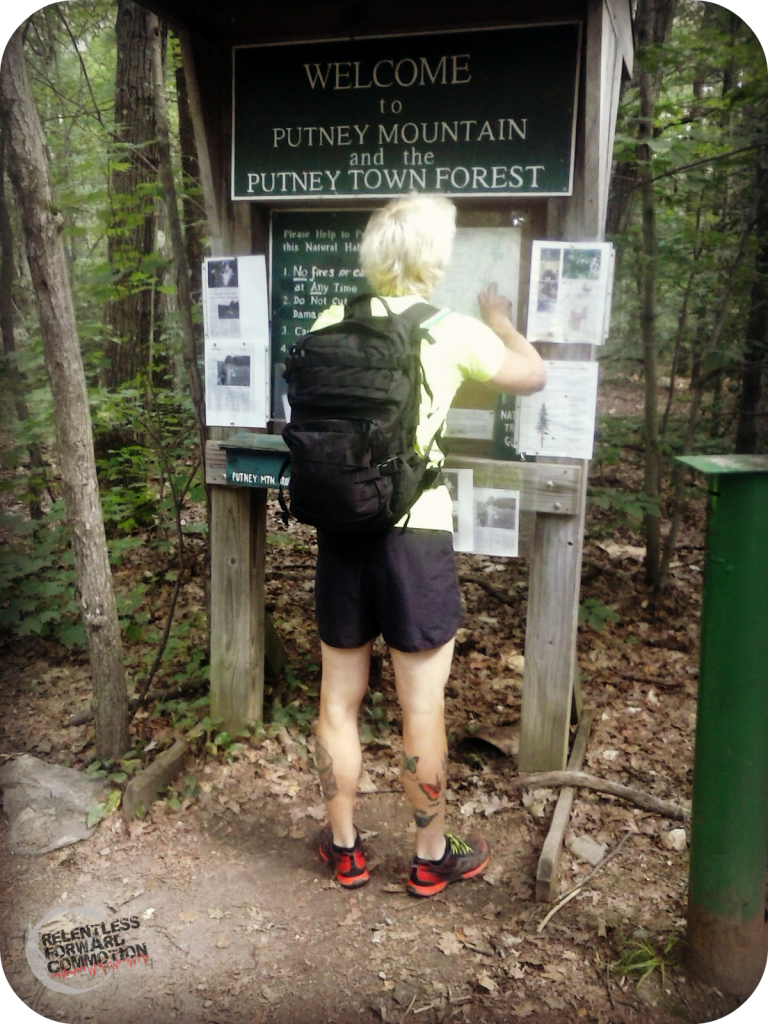 I, having dropped out of Girl Scouts somewhere after macaroni necklace making and before compass reading instruction, was ready to go, map or no map.   Because after all, you just follow the blazes on the trees, isn’t that how this works?  Plus my pack was feeling kinda heavy, so I chose “Ridge Line Trail” which sounds far more promising than “West Clot Trail.” 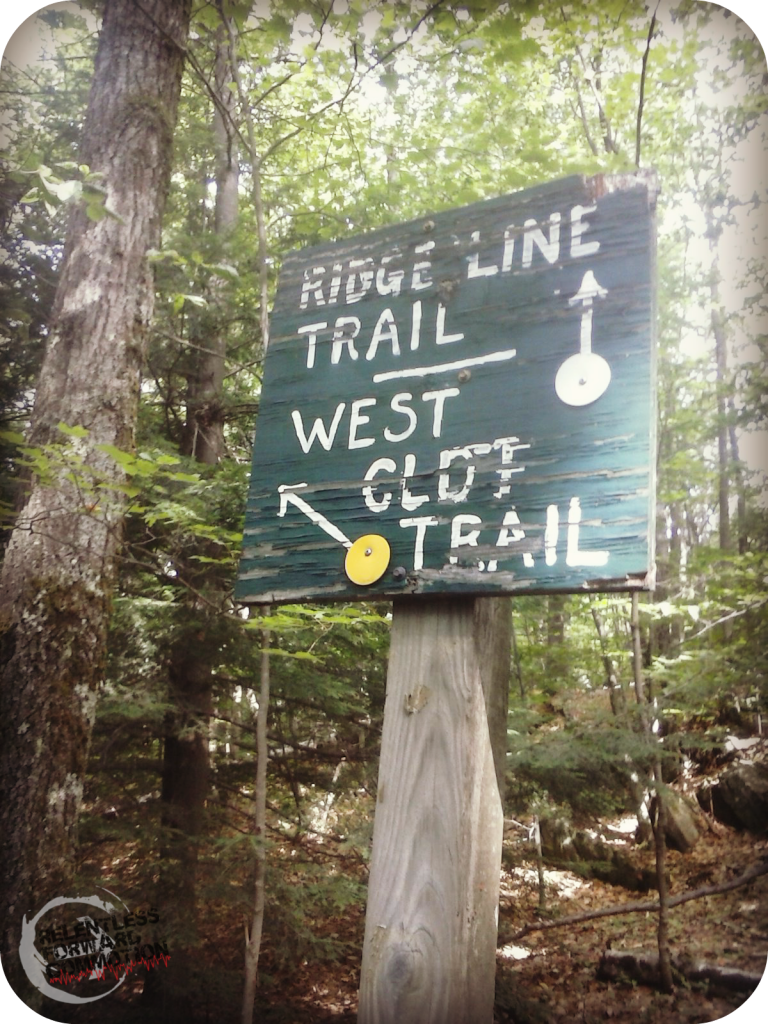 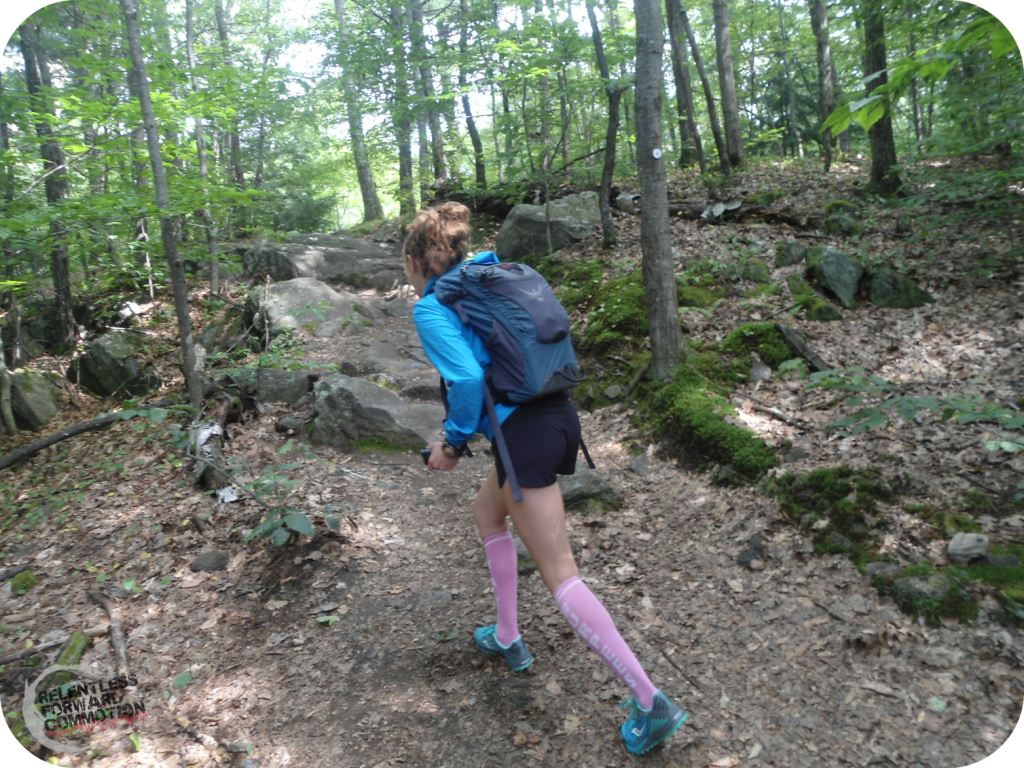 So off we went.  A relatively easy, though still pretty technical (as in, watch your step or you’ll faceplant on a tree root) hike, the first 15 minutes or so were spent getting used to the screaming in my lats/upper back.  Bricks are surprisingly heavy and awkward.   I led the way as I loosely followed the white blazes on the trees.  The trail was relatively beat down, so it was really easy to not go off trail…until I did.     At one point, not very far into the hike, I looked up to see a blue blaze.  Where did THAT come from? And where did the white ones go?    Geoff pointed out that our trail took a sharp 90 degree turn with no warning.  But just ahead on the now blue trail we could see a summit, or a clearing of some sort, so we decided to check it out anyway. As I approached the opening at the end of the trail, I saw what looked an electric fence surrounding some heavy vegetation.  I’m not going to lie, being in backwoods Vermont, my first thought was “what is someone growing that they don’t want anyone stealing? ”  Imagine my surprise when I got to the fence expecting to see some sort of illegal plant (ahem) and instead came face to face with goats. 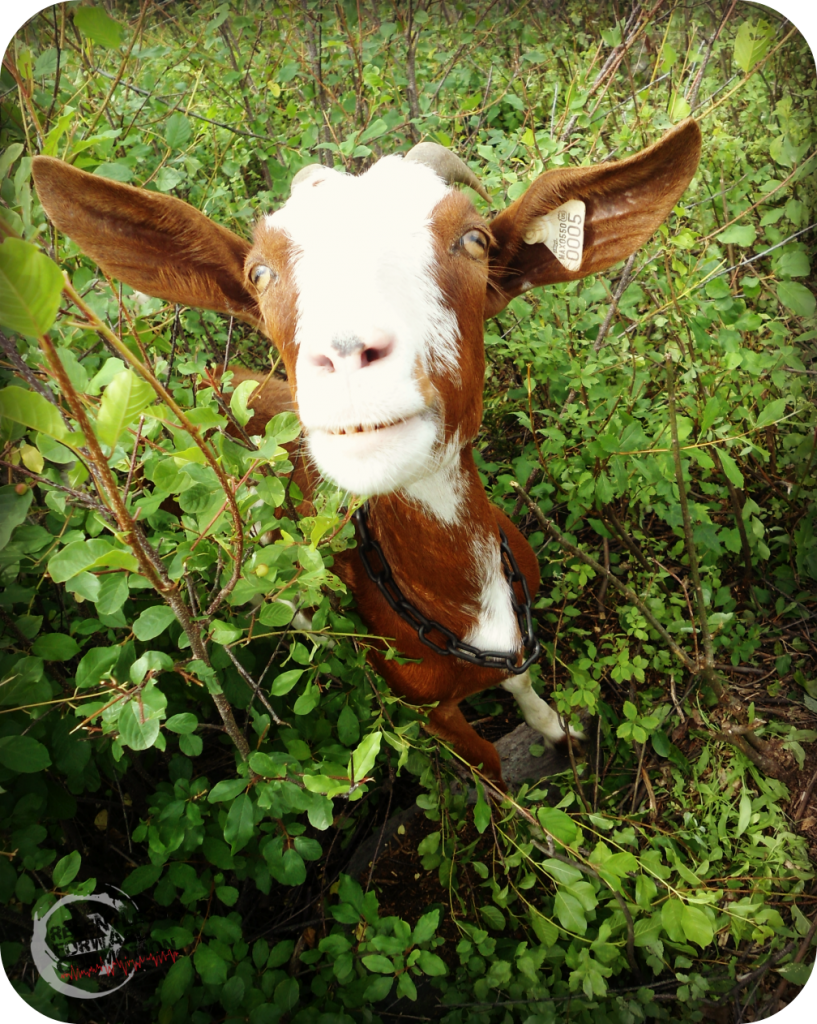 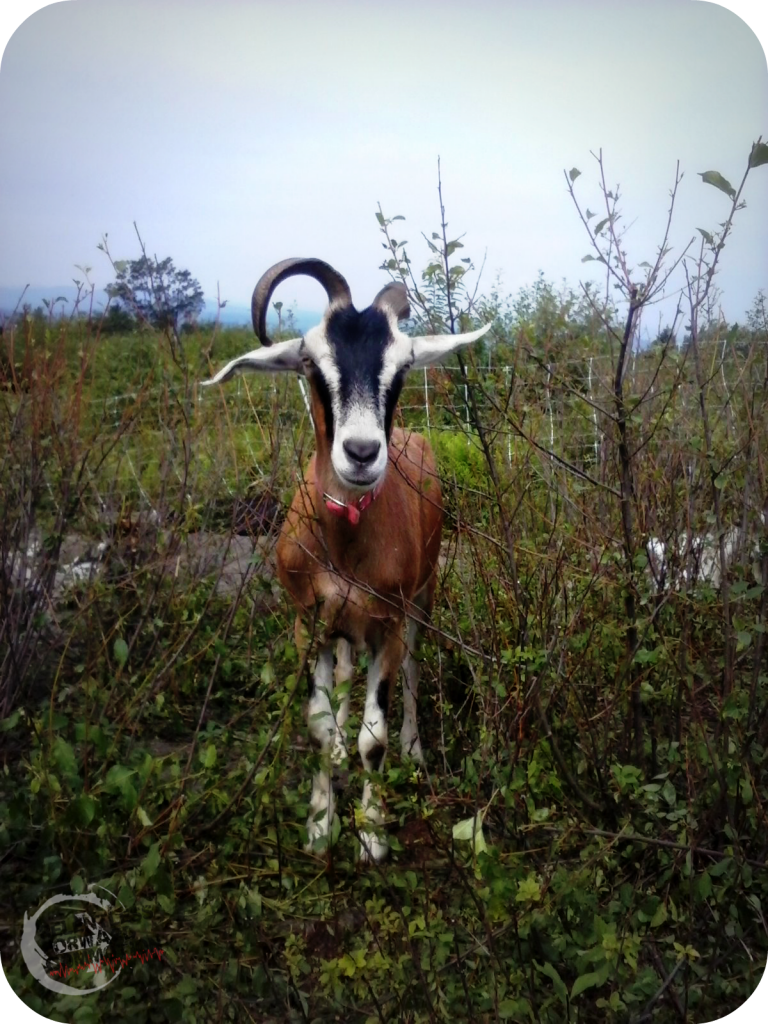 Turns out, if I had bothered to look at the map at the bottom of the trail head, I would have also seen the numerous articles posted about the goats on the top of the mountain.  Turns out they were put there to help combat (by way of eating) an invasive plant that has begun to spread across the summit.   Just another reason I love Vermont: when faced with a weed problem, they choose goats over pesticides.

We wandered around the summit for a few minutes: 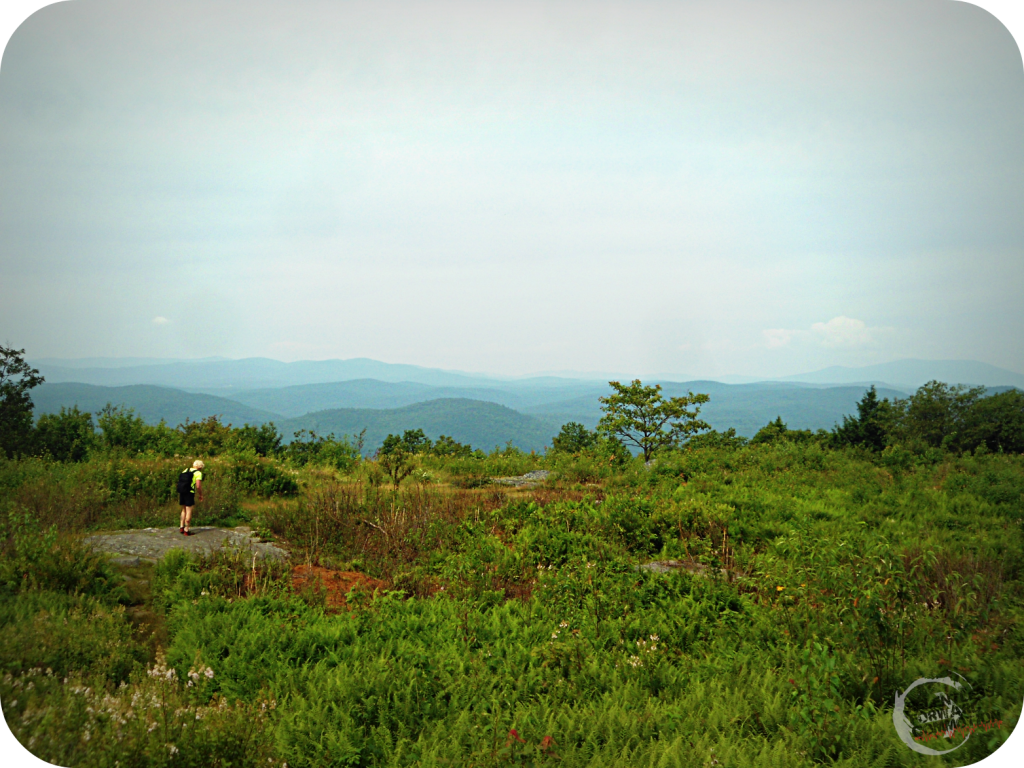 And then fueled up while we did a little Tough Mudder training: 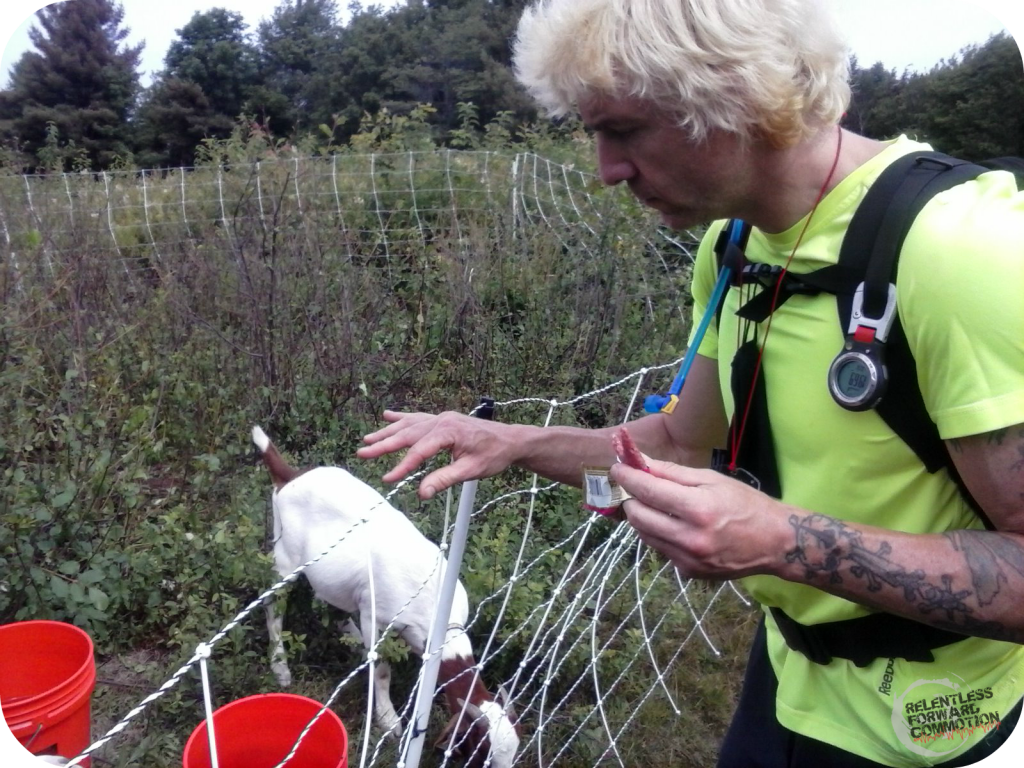 Next we decided to head back down to the spot where we lost the initial trail, and continue following that.   It very quickly brought us to a road.  A dirt road, but a road none the less.  There were still blaze marks on the trees so we followed the road for about a quarter mile or so, until we decided that road walking was not our intentions for the day, so lets head back to the summit and take a different trail.

At the top, we said hello to the goats who were now getting bored with our presence, found some blue blazes on a rock and followed the trail down.  Less than a quarter mile down, we ran into this intersection.   The arrow pointing towards the camera (the one you cannot see) was the other end of West Cliff Trail (not to be confused with West Clot Trail.)  The actual distance marker had been worn off, but looking at the other two signs that consisted of less than a mile, I figured it couldn’t be THAT long of a trail.  Right? 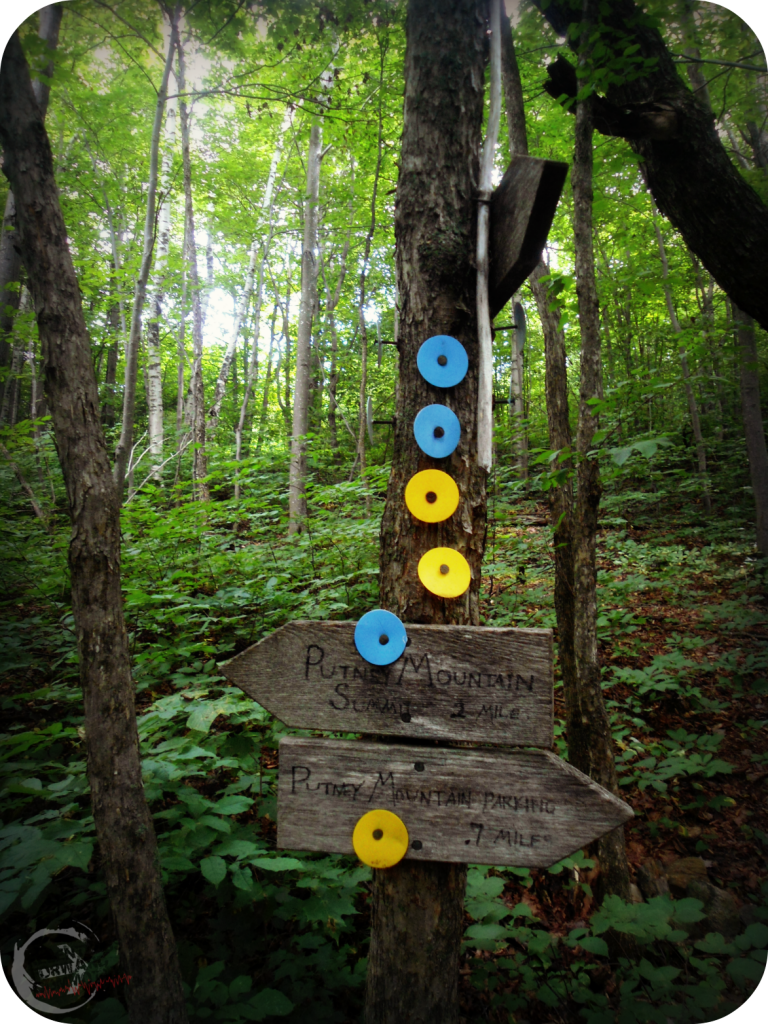 There are no pictures of the next stretch of trail.  When they said “cliff” they weren’t kidding, and frankly, I was too worried that the backpack full of bricks would send me careening down into the forest below if I dared stop for a photo, even if it was Instagram worthy.   We walked, and we walked, down, down, and even further down we descended down the steep trail.  I made a joke about how thankful I was that we were going down instead of up, to which Geoff informed me that we have descended much further than we ever climbed, meaning that eventually, we were going to have to climb.  Thank you altimeter, for that awesome news.

An hour passed.  Miles passed.  Eventually I had to take the pack off of my back, and as we stopped to take a break, I tried to pull up a map on my phone.  Of course, there was zero cell service.  “Don’t worry” Geoff assured me.  “It’s not an adventure until you get lost”.   We were still following the yellow blazes so we essentially weren’t lost, we just didn’t know where we were.  The increase in “no trespassing”, “keep out” and random blood red spray paint on trees neighboring the trail were slightly concerning,  as was the sound of a chainsaw that came and went from who knows where.  I couldn’t help but notice we were continuously heading North…away from the cars in the parking lot. 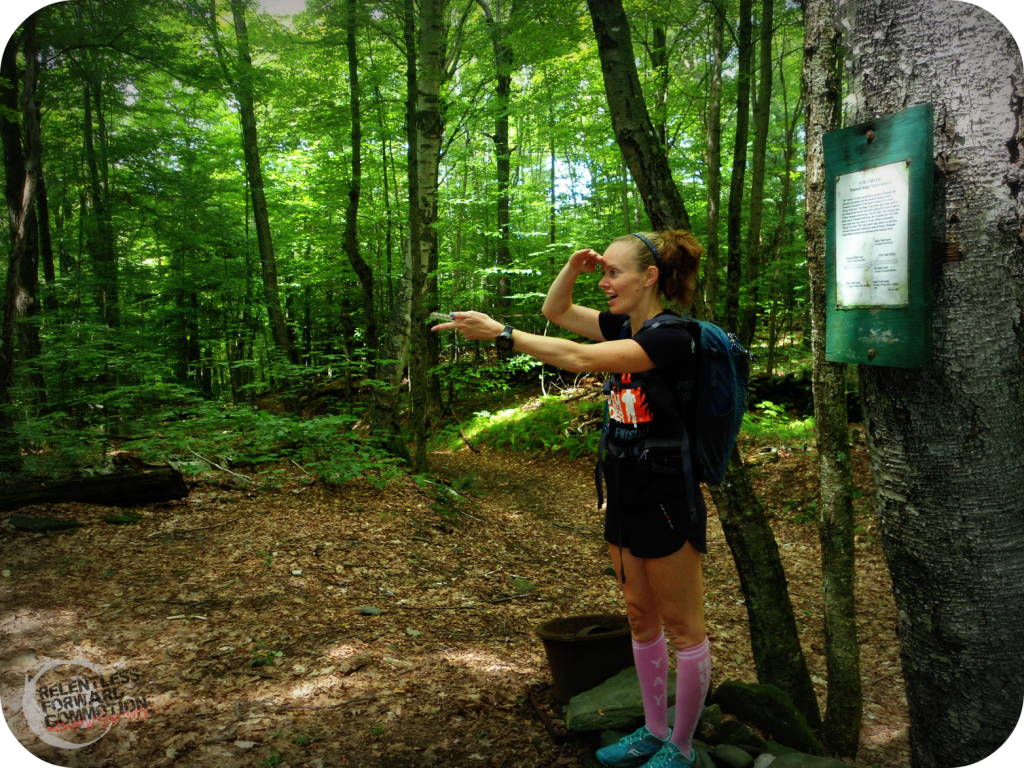 Geoff: ” Let me take a picture of you, pretend you know what you are doing with a compass, and we’ll post it on Harlot’s facebook wall and say ‘you are SO gonna loose the orienteering challenge in October’!” (true story)

Turns out we picked the trail that eventually ended up on a long stretch of dirt road. 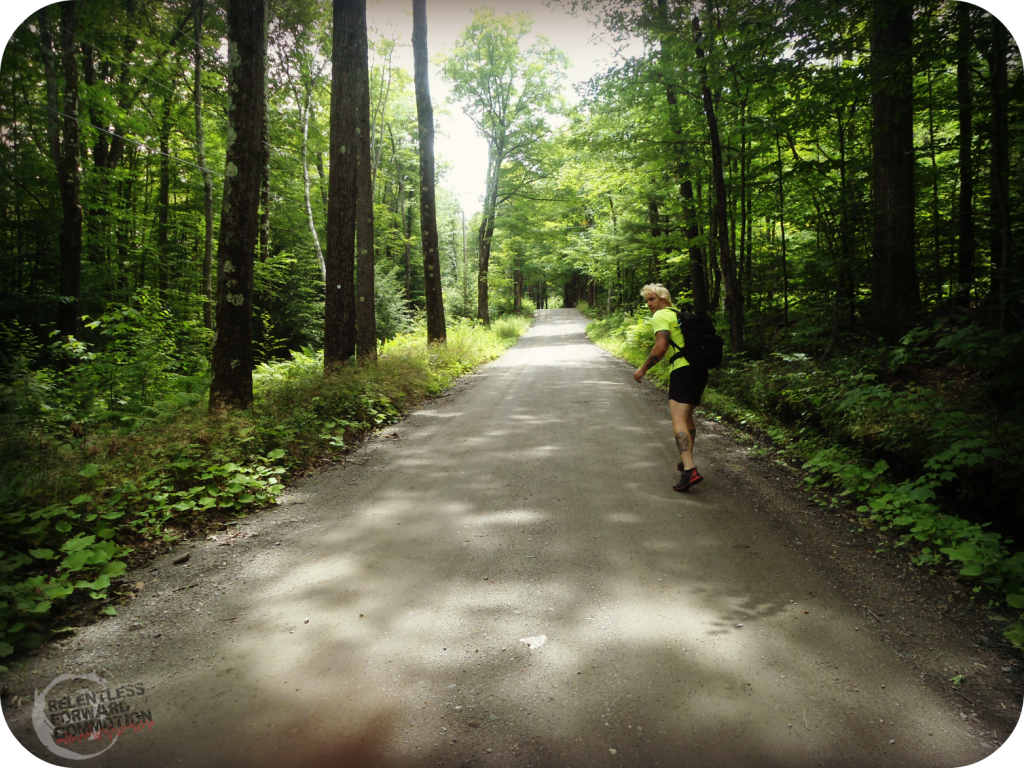 But not just any back road….it was the back end of the same exact one we were on earlier in the day.  Whomp whomp.   We briefly argued whether or not this meant we had to take the trail back to the summit.  I explained that it indeed did, as the road we were on was East of the parking lot we had parked in, which we had to take a right hand turn to get into.  There was no way this could be the same road.  Geoff didn’t believe me, but followed reluctantly when I reminded him that my phones GPS was way more reliable than his, which essentially had absolutely nothing to do with this scenario whatsoever.   So back to the summit we went,which only meant one thing: 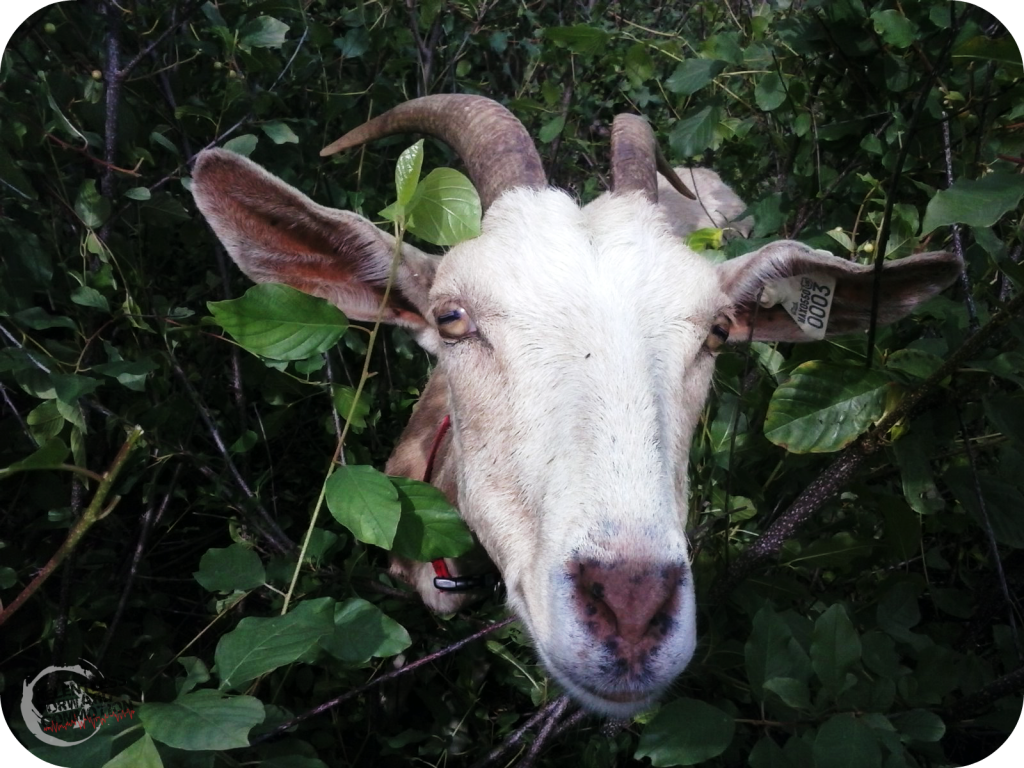 Back to the summit, and down the initial trail that we had came up on.   Another session of “carry heavy things for fun” was complete.