Shoe monogamy.  In my world, it’s a very tough concept for me to stick to.  I have a few companies/brands I truly love, for reasons more than just the fact that their shoes perform far beyond my expectations.   But what it boils down to is this:  I’m an exercise science nerd.   I love seeing how the human body moves, and testing new ways to make it more efficient in sport (especially when that efficiency and improvement is that of my own).  And I think it goes without being said that there is a ton of science behind the sneaker industry.  Sure, a lot of marketing and following trends, but mainly, a lot of science.

Last month while at the Spartan Death Race, I was introduced to a brand of sneakers I had never heard of before – On.   And chances are you may not have heard of them either, so I’m excited to introduce you to their technology:

Because I’m a giant science nerd, let’s just cut to the chase:

A scientific study by the Swiss Federal Institute of Technology (ETH) measures a lower heart rate and reduced lactic acid build up with the Swiss running shoes On.
40 well-trained runners took part in a broad study at ETH Zurich, which showed that, on average, while treadmill running in the On, their heart rate was reduced by 2 beats per minute when measured against their heart rate while running in their favorite running shoe. It also revealed the lactate acid concentration in their blood was reduced, on average, by 5.4%. The differences are statistically significant. For 12 runners, the heart rate was reduced beyond daily variances by up to 10 beats per minute. Only 2 subjects showed an increased heart rate outside their daily variances. With the On, most runners could therefore perform at lower heart rate levels when running at the same speed as in their usual shoe of choice.

The study was conducted at the Institute of Human Movement Sciences and Sport by Prof. Dr. med. Urs Boutellier and Claudia Knöpfli. “The physiological benefits of the On compared to conventional running shoes seem to increase at higher speeds. It will be exciting to see how this translates into competition results”, explains Boutellier.

“Many runners, athletes and casual joggers alike, report improved running times and new personal bests. The independent ETH study now proves the key factors involved on a scientific level“, says Olivier Bernhard, the former professional triathlete who led the development of the On running shoe with Swiss sports scientists and engineers.” I was given the choice of which style shoe I wanted (check out the collection here).  I went with the Cloudsurfer.  Designed for neutral runners and light to moderate overpronators.  I have been running in a neutral (and sometimes even minimal) shoe for years, so any time I hear neutral, my ears perk up. 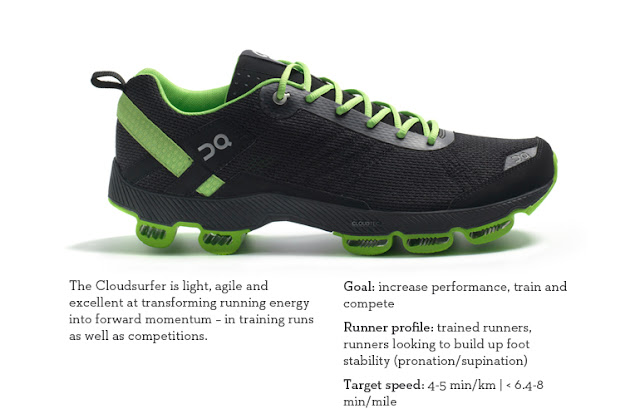 I was slightly skeptical at first.  Having come from wearing very neutral, almost minimal shoes for years now, these little bumps (otherwise known as Cloudtec elements) for cushioning seemed very foreign.  However, the run was very smooth, and almost springy (but not the dreaded “cushiony” that many of us fear, which leads to lazy form and heel striking. Or at least in my case.)  The company claims that once these Cloudtec elements are fully compressed, they allow and assist in a firm push off the ground, which is probably the explanation for the “pep in your step” feeling, and reducing the impact of the harsh pavement we all love to run upon.  I’m all for anything that maximizes return and minimizes impact and effort, especially when you plan to be on your feet for hours at a time. 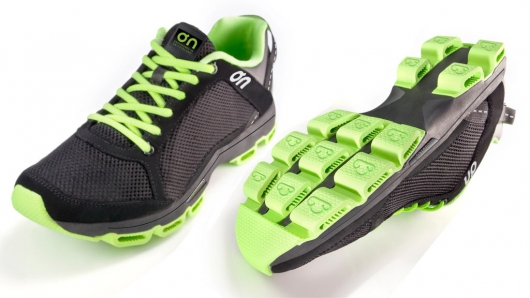 Other positives include:
Fit:  nothing chafed, blistered,  irritated, or felt out of place. Lightweight, easy lacing. No bells and whistles in the fit, just comfort that lasted for hours.

Color and design.  Many compliments and questions from passers by, especially for the Black /Lime color scheme

The sole is a bit stiff.  This may not be noticeable to those running in traditional sneakers, but for some of us who spend our lives in VFF’s and Merrell gloves, it’s noticeable.  Not enough to not want to run in the shoe, but it’s certainly something to consider.

On shoes are a little pricey, ranging from $119-$139 retail, but as we all have come to learn in the shoe world: you get what you pay for.

Want to learn more?  Check out On’s facebook page,  website, or find a dealer near you to try out a pair (scroll to the very bottom of the page for U.S. locations)

Oh and in case you were wondering, On shoes are NOT just for the streets. Check out this awesome video of Ben Allen, Australian Xterra Triathlete, tearing up some trails and mountainsides:

In conclusion, if you are looking for something new to put on your feet, something light and efficient, but are a fan of having a little more stability than all of the super minimal shoes on the market, I would suggest giving On CloudTec shoes a try.

FTC disclaimer *While I was provided with a free pair of Cloudsurfer shoes, this review was uncompensated, and all opinions expressed are 100% mine….and Geoff’s, since he ran in them too.*