The commute to and from my new gym/work is somewhat tedious.  Though only 14 miles away, there are more than a dozen stoplights, a handful of major intersections, and what feels like endless road construction that typically results in a 30 minute drive to work, and often a 40 minute drive home.  Afternoons are slightly more chaotic, which makes no sense to me as I drive TO work during what I would consider typical morning rush hour.  But I digress.

During these road warrior sessions, I do whatever I can to entertain myself, namely, surfing the numerous local radio stations (I still haven’t found one I love).  The other day, while playing what has come to be known as the “Scan Game” (hit the radio scan button and listen to 8 seconds of random songs until you finally find something you know, then frantically try to hit the scan button a second time to remain on that song, before it automatically forwards to the next channel) I heard a musical gem that I quite literally do not believe I’ve heard in the last two decades: New Kids on the Block “You Got It (the Right Stuff).

Incase you have no idea what musical masterpiece I’m referencing, let me go ahead and share this video (you’re welcome):

Now,  when this song hit the charts in 1989, I was an incredibly influential 7 year old who fell head over heals for these boys from Boston.  Despite that being a very long 26 years ago,  when that familiar tune came over my car speakers that afternoon, I still knew every single word, every single lyric, and some of the dance moves – modified car version of course – much to the amusement of the people stopped next to me at a traffic light.

Once the song was over I composed myself from boy-band-crazy 7 year old back into a grown woman (or at least a 33 year trying to pretend she is an adult), and thought about how hilarious it was that I still knew all of the lyrics, all this time later.  I immediately thought of my own kids, now aged 6 & 8 (though closer to 7 & 9), and had one of those surreal, punch in the gut, holy $&*%, parenting moments.

(Bare with me while I get to that moment…)

It’s no secret that kids brains are like sponges.  We know from the second we find out we are bringing another life into this world that we…and our chosen”village”…will be responsible for influencing these kids and molding them into what we hope will turn out to be an upstanding human being.  We also fear that any one single wrong move, one misspoken sentence, or inadvertently watched rated-R TV show will absolutely ruin our children, sentencing them to a life of crime, bitterness, years of therapy, or worse.  My generation of now-parents is full of moms and dads absolutely petrified of somehow ruining our kids, and I am certainly no exception.  Our fear and attempts to filter all of the negative out of their lives likely does more harm than good, but that is another topic for another day.

Back to my car: the surreal moment came when I realized that my kids are at the prime age for me to not only woefully mess them up with my parenting skills (or lack thereof), but they are also ripe to learn and absorb all of the GOOD things and experiences in life I want them to enjoy.  Now is when we create those memories that they will one day hopefully look back on and say “I have fond memories of doing _____ as a child”…even if they don’t fully understand the impact of those moments and experiences today.

Now,I don’t want to be a “little league mom” at all, but it would thrill me to no end if my kids grew up to enjoy endurance sports.  (Is anyone here surprised at that statement?)  My boys don’t have to be the next Meb Keflezighi or Anton Krupicka.  But I yearn for my kids to grow up in and around the amazingly positive environment that is the endurance community.  I want them to see these motivating, inspiring people who push themselves physically and mentally to achieve their goals.  I want them to see physical activity as healthy and natural, and not something to dread solely because “exercise is supposed to be good for you.”  I want them to hopefully one day embrace this sport…and if it’s not too much…pace mom in a race one day.

In other words, I want them to BE a part of the endurance community, rather than growing up simply knowing that running is something mom does when she isn’t around.

(I also want them to get as excited as I do when they hear Hall & Oates, but that is an acquired taste for sure.)

There have been a lot of pros and a lot of cons about our recent move.  I’m choosing to focus on the pros and let the cons work themselves out in due time.   Positive thinking or survival skills, take your pick.  But anyway, one of the big pros is that we have an amazing network of runners down here.  Between the Grand Strand Running Club and the Black Dog Running Company, it seems there are multiple group runs and events every week.  My kids are too big for a jogging stroller, yet clearly still too young to be left alone, so I just take them with me and we run…at a little kid pace.  It’s certainly not training for me, but it’s far better than sitting at home.

Last week we hit up a Brooks shoe demo and group run.  My 8 year old was convinced he’d run 3 miles.  He lasted about a half a mile, but fun was had none the less.  They both asked a lot of questions about running, racing, and how they could get “better”.  The six year old got a huge kick out of carrying a hand held water bottle, because, well, he’s six, and little things still excite him (it’s a shame we ever outgrow this).

This week, we hit up a group trail run.  While the group went in one direction, I took the boys in another.   I’ve become more familiar with this trail over the last three weeks, and knew of a shorter section that we could easily bail out of, once the “this is too hard” whining kicked in.

But to my surprise, it never did.

Maybe 200 yards, the first hairpin turn, and a sharp but short climb into the run, they both started shouting about how much fun they were having.  Again, I skeptically waited for that joy to quickly wash away, but it was nearly all I could do to keep up with them.  It turns out, according to my kids, mountain bike trails are akin to real life to Mario-kart tracks, and what little boy would turn that down?

3 miles of intervals.  Yes, there were a lot of walking breaks, but even before I could suggest thinking about running again, they would take off.  And the fun they were having was absolutely contagious.  We ran recklessly and without abandon, and it didn’t take long for my relentless “be careful” and “watch your step” mom warnings to dissipate into the same sheer joy the boys were displaying.  I found myself hitting banked corners with my arms out, airplane style, and yelling “weeeeee” as I flew down hills and over tiny stretches of pump track. 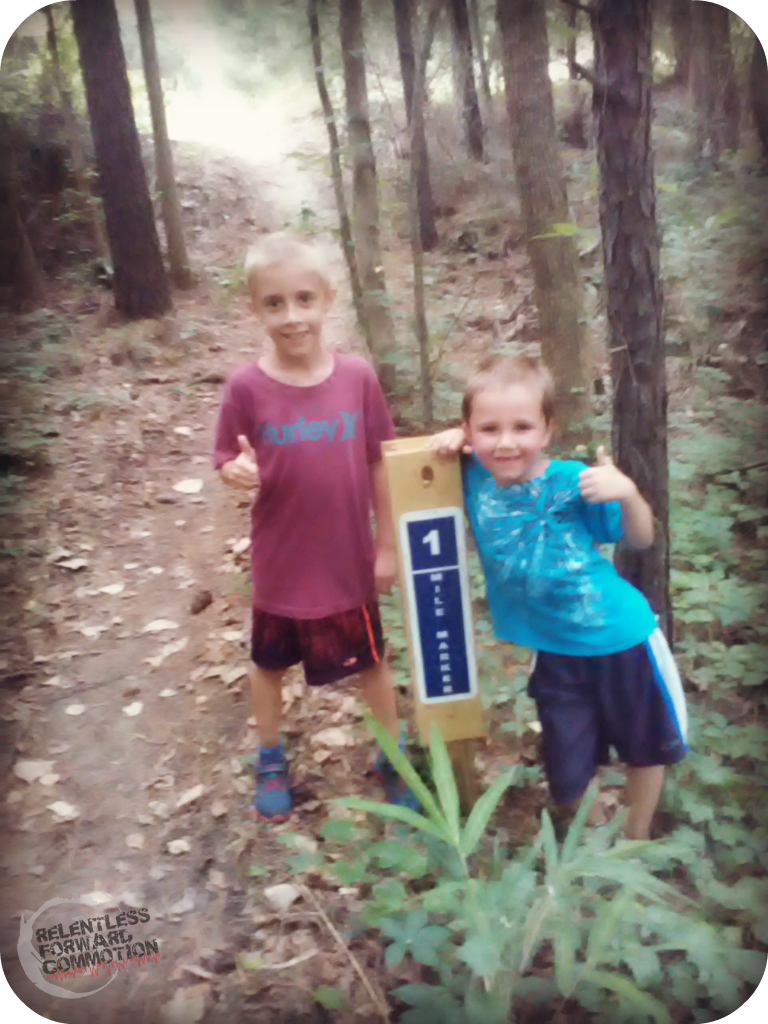 Side note: I *just* bought a brand new phone. For some reason, the upgrade has resulted in a poor camera. Not sure if it’s the humidity fogging up my camera lens, but all of my pics are coming out blurry. First world problems? Indeed.

I eventually coerced them down to the parking lot to meet back up with Geoff.  The kids then coerced us to head back up to the trail, where we ran some more.  Finally, the last of the sun was starting to set, so I had to put my trail shoe down and insist we go home.  The suggestion was met with much protest, but they gave in when I promised we could come back very soon. 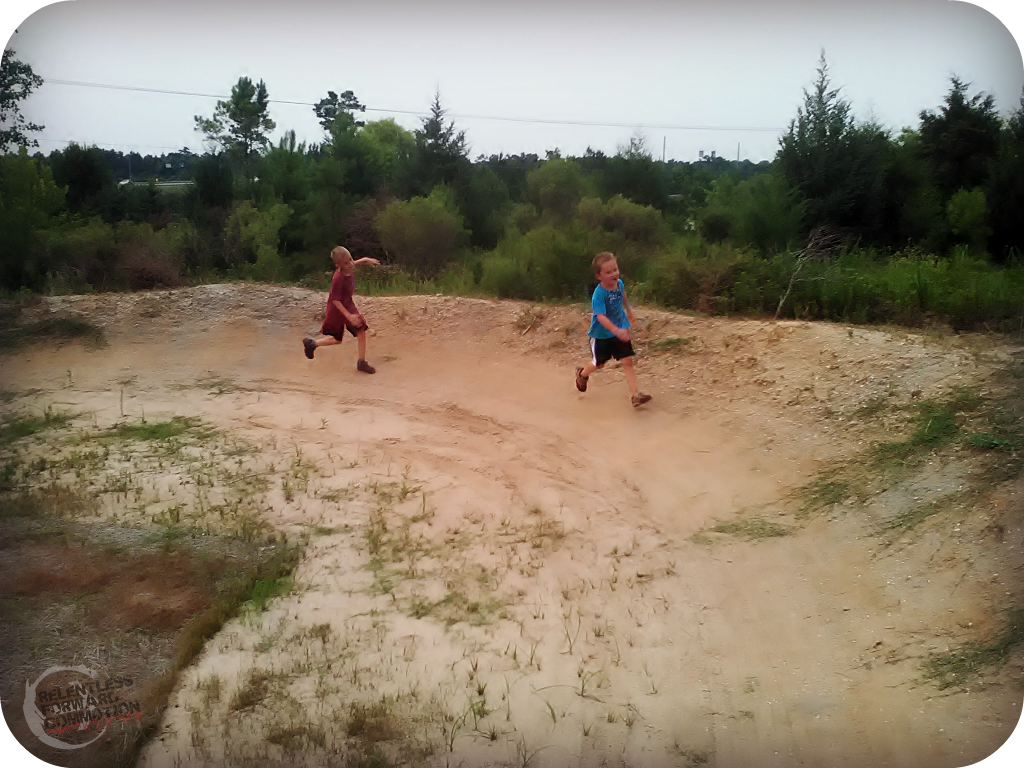 Once buckled into the car, my 6 year old boldly and lovingly stated “Mommy, that was the most fun thing EVER.  Thank you for taking us.”

I have a lot of learning, growing, and catching up to do as a mother (I’m not sure that feeling ever goes away?).   But in that very moment, having been able to share something I am so passionate about with my kids…and SEE them experience that same passion?  I finally felt like my little team and I, we will get this life figured out after all.