You’d be hard pressed to find a toddler or preschooler who doesn’t love to run. It is instinctual. Little kids run for fun, hardly ever out of necessity, and almost always with a giant grin on their face. If you are a parent, you are likely guilty of hollering “don’t run in the _____” (street, store, down the stairs, in the restaurant, etc.) If you aren’t a parent, chances are you remember hearing your own parents yell any of the above warnings in your direction when you were a wee one.

Yes, it is a known fact that kids love to run. However, I’ve come to realize that not all kids love to race.
Exhibit A. My beautiful first born. Rowen is three and a half years old, and in his three and a half years has been subjected to a total of 5 organized races (tot trots, if you will). And all 5 have been met with utter resistance.Race #1, a family fun run at 18 months old. He wanted to be everywhere but at the race, and frankly I couldn’t blame him. It was really crowded and even I was a bit overwhelmed. 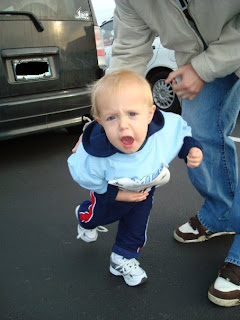 Race #2. Rowen was about 6 months older (just shy of his 2nd birthday) so I thought now would be a great time to give the tot trot another go. There were many factors contributing to the failure of this race, namely missing nap time and a delayed race start (7:30 pm, seriously too late for a tot trot race directors!) As you can see in the picture below, Rowen is having a melt down and I, in my 8 month pregnant glory, am dragging him to the finish line in beauty pageant mom/little league dad fashion. He did NOT want to race, but darn it I wanted him to. Lesson learned that day. There isn’t a more elegant way to put other than to simply say :I felt like an ass for doing that to him. 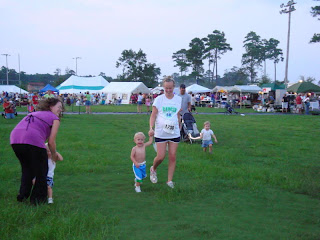 But it wasn’t the running Rowen hated. Because the next day, Rowen chased after and ran a good quarter mile loop at the very same park with Aunt Holly. 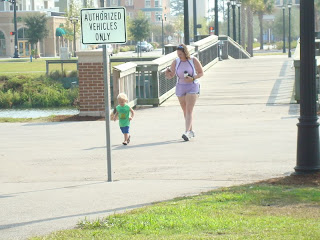 7 months later. We decided to give tot trot #3 an attempt at a local St Patricks day race event. Rowen, seen below, was itching to run. When the lead runners ran by for the 21 mile race, he took off after them. It was adorable. 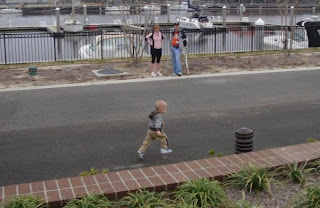 But when it was time for his official tot trot, he wanted nothing to do with it. Eventually, his Grandma coerced him to the finish line (long after the rest of the tots had trotted away), and in typical Rowen fashion, he refused his medal. 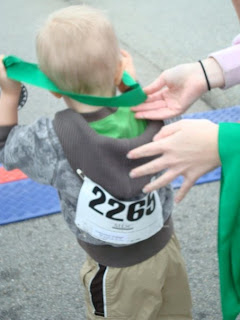 4 more months later, we were in Lake Placid NY for Ironman USA. Of course, I thought it would be fantastic to let little Rowen earn his very first M-Dot medal. We entered him in the 0.75 mile race (and oddly enough, HAD to buy a 3 year old a USAT membership. Yes, for a tot trot. He now gets his quarterly USAT magazine in the mail , and has a membership card. haha!) and waited for the start. The start came, the kids went….and we stayed behind. Eventually he warmed up to the idea of “going for a walk with mommy”, and after some running, some walking, and some being carried by mom, we almost made it to the finish line. But I swear he was giving me the toddler stink eye the entire race. Had he been a teenager, possibly would have mumbled something along the lines of “this is so stupid, i can’t believe you are making me do this” under his breath. (and probably a few “uggh shut up with the ‘go Rowen go!’s, you are SO embarrassing!)
As soon as the finish line was in sight, the announcer called for people to cheer him in. He was NOT having it, and it was all I could do to get him to cross that line. And as soon as he did…you guessed it. He refused his medal, haha. 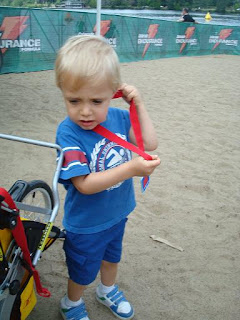 Yet, just a week later, Rowen ran laps with me at the track, nothing but smiles and giggles. 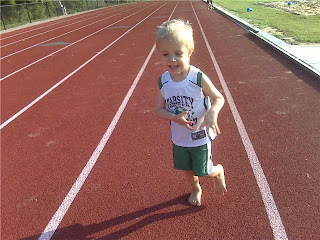 As you can see, it appears I have a purist runner of sorts on my hands. One who runs for the love of running, and hates to ruin it with any pressure or competition. CLEARLY he did 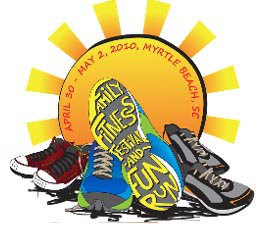 not inherit this from his mother. Competing is half the reason I LOVE to run. Competing against myself, the clock, and others. I love the rush of it all.

So Saturday, at the 2010 Myrtle Beach Family Fitness Festival, when Rowen told me “Mommy, I do NOT want to race” when his name was called up to the tot trot, I wasn’t surprised. Though I knew it was coming, I won’t lie, I did bribe him with some fruit snacks if he would run, since I had JUST forked over some cash to enter him in the race. Again, he told me in his stern toddler voice, “NO mommy, I do NOT want to race”. So I respected his wishes. And he got the fruit snacks anyway.Do I sound like an obsessed pushy pageant race mom yet? I swear I’m not, nor am I out to create a future Olympian. As parents, we all want whats best for our children. And when we have a passion for something, naturally we want to share that with our children. Especially if that passion is something that has played an integral part in our own lives, such as running has in mine. Granted, Rowen is not even 4 years old yet. He is just learning his boundaries, his likes and dislikes, and his independence. 3.5 years old is a little young to write him off as a runner. He may one day surprise me and eagerly cross the finish line of a race, or even grow up to earn his second M-Dot medal. Or, he may despise running and beg to stay home or fake being sick on the day they are scheduled to run the mile in middle school gym class. Who knows. All I know is that until that one day comes when he flat out tells me “Mom, give it up already”, I will keep presenting him with these opportunities.
Meanwhile, I’d like to present to you the second place winner of the under 2 age group at his first ever race: Baby Kain! (18 months old) 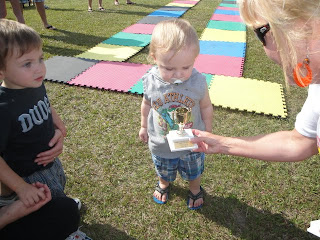 I could not contain this kid !!! As soon as I lined him up, he knew just what to do, and was pulling at me run. He ran two heats, his initial race and the championship race (did I mention this was a NON competitive race? HA!) and I had to hold him back like a horse at the start of the Kentucky Derby. 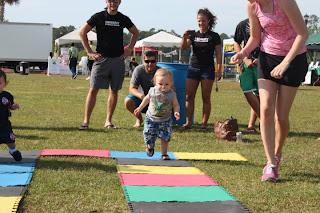 Both times he got to the finish line and raised his hands in the air baby-shouting “yaaay I did it!!!” (through the pacifier that is…we are working on making that thing disappear…), and hamming it up for all of the spectators. Little man won his very first trophy, which he held onto and proceeded to stuff pretzels and fruit snacks into. I was a proud mama.

We had a wonderful day at the family fitness festival . I only wish there had been a larger turnout. I may be biased, clearly, but I think this festival had an incredibly important message behind it: that fitness is FUN, and should be something the whole family participates in together. I think so many children grow up seeing mom and dad dreading exercise, and associating it as something bad that only needs to be done when the scale tells us something we don’t want to hear, or our pants start to get snug. No wonder our society as a whole has such a negative outlook on working out, that it is something hard and miserable.

This particular park hosts all kinds of festivals and events just about every weekend, and there are always a ton of people out and about. I guess the fact that it was the first year of the event, and the weather was kind of brutal (over 80 degrees and HUMID!) contributed to the dwindling crowd. And thus, due to the lack of people, the boys and I took first place in the 1 mile stroller strut. Because no one else ran, haha. 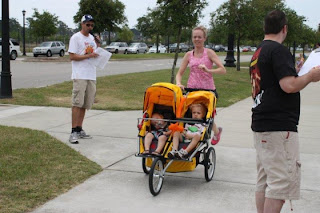 A 2nd place trophy in the stroller obstacle course rounded off our day, and we headed home to recover from the heat . Baby Kain spent the afternoon playing with his new “toys” 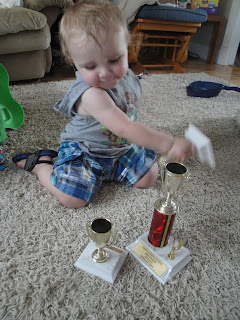 And Rowen spent the afternoon running freely around the backyard, all competition and pressure aside 🙂
Happy running (racing or not!) my friends !