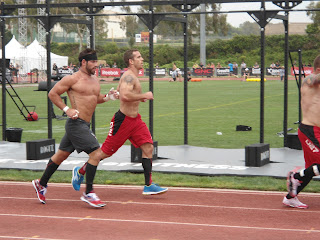 As I sat down in front of my laptop, ready to verbally spew the inspiring chaos that was my weekend at the 2012 CrossFit games into words on the screen, I had a realization:  this started as a running blog.

And most of you are runners, not crossfitters.

And further, I’m such a newbie to crossfit myself, it’s highly unlikely that any of us really have any idea what we are talking about when it comes to WOD’s and AMRAP’s and thrusters and such.  Sure there’s probably a handful of you out there who attend a box but from comments I’ve seen on past posts, most of us are either new or clueless when it comes to the CrossFit world.

WHAT is CrossFit?:
(For a long description from CrossFit.com themselves, read here)

And by scalable, I mean this: ANYONE and EVERYONE can participate in the same workout.  Here’s how it works: a “WOD” (workout of the day) is prescribed.  It’s typically a short series of exercises that you either try and complete for a time, or you complete “AMRAP” (as many rounds as possible” in a given time.  You scale and modify the workout to YOUR abilities.  Can’t do a pull up?  Add rubber bands.  So in theory and in practice (this happens often), a mega fit 20 year old can workout right next to an 80 year old woman. 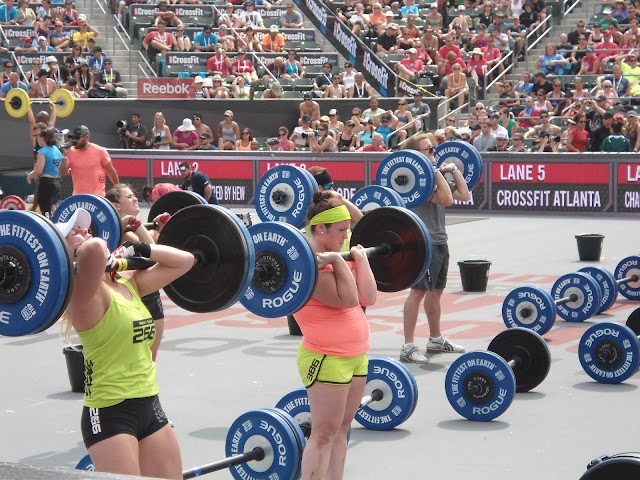 If you’ve heard a little bit about CrossFit and some of the WOD’s, you may have heard some women’s names thrown around, such as “Cindy” (5 Pull-ups, 10 Push-ups , 15 Squats, As many rounds as possible in 20 min) or “Fran” (Thruster 95 lbs, Pull-ups , 21-15-9 reps, for time).  Why?  Founder Greg Glassman explains: “I want to explain the workout once and then give it a name. I thought that anything that left you flat on your back, looking up at the sky asking ‘what just happened to me?’ deserved a females name. Workouts are just like storms, they wreak havoc on towns.”

CrossFit, as we’ve probably ALL noticed, has been sweeping the nation and become wildly popular.  Many people attribute that to a number of reasons.  First and most important, the workout WORKS, people see results are they are training to be fit for life.  Second,  these unique workouts are typically short in time, hard, and incredibly unique & constantly varying. Therefore, no boredom.  What would you rather do, work yourself into the ground in 12 minutes or stare at yourself in the mirror on a treadmill for 45?  I know I’m preaching to the marathon crowd here, so opinions may vary with that question, haha. But for the majority of the fitness/health seekers in our society, they would opt for #1.   And lastly, the community and social aspect of CrossFit is HUGE. I’ll go into more detail in my Games recap posts, but the family feel between athletes is amazing.  It’s very similar to that of the running community.  You don’t just do CrossFit, it becomes a part of your life and who you are.

Interested but intimidated?  Almost all CrossFit affiliates offer what is called an “On Ramp” program, typically a month of beginner sessions teaching you the moves, proper form, and getting you familiar with the ways of crossfit.  Don’t worry, you won’t be the only beginner.  And everyone was a beginner at some point, even Rich Froning and Iceland Annie!

For more info on CrossFit itself, check out the CrossFit FAQ’s

WHAT are the CrossFit GAMES, and how do they work? 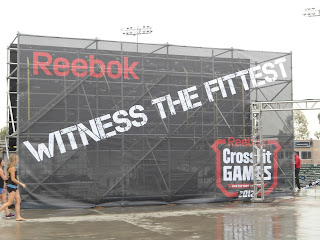 This, in my opinion, is THE coolest part of CrossFit, because ANYONE can qualify to compete.  Bare with me while I explain how this works:

1) Early spring, the “Open Qualifiers”… uhh….open.  There is one workout posted per week for 5 weeks. The workouts are varied and no one knows what they will be until they’re announced (hence the whole purpose of creating well rounded athletes.)   You complete the WOD at your box (what they call a CrossFit gym) and submit your time,  *or* you can do the WOD anywhere else…even your home gym or garage, and submit a video as proof of your time.

2) At the end of the Open, the top 60 men, 60 women and 30 teams from each of the world’s 17 regions were invited to compete live at the upcoming Regional competitions.  And as you can probably see where I’m going now…the winners from the regionals make it to the finals, otherwise known as “The Games”.

watch this quick video to see just how massively the Games have grown in just 6 years:

Just to give you a tiny idea of the growth:  compare that backyard BBQ to over 12,000 people in attendance on day one of the 2012 CrossFit games.  Unreal, right?

So at the games, the athletes compete in various WOD’s, most of which are unknown to them before they get there.  And it could be ANYTHING.  For example, when they arrived this year they were thrown into a pretty gnarly triathlon:  Ocean swim, offroad bike on single speeds, and a crazy trail run with an obstacle course.    They compete for points, and at the end of the weekend, the male and female with the most points are crowned the Fittest on Earth. 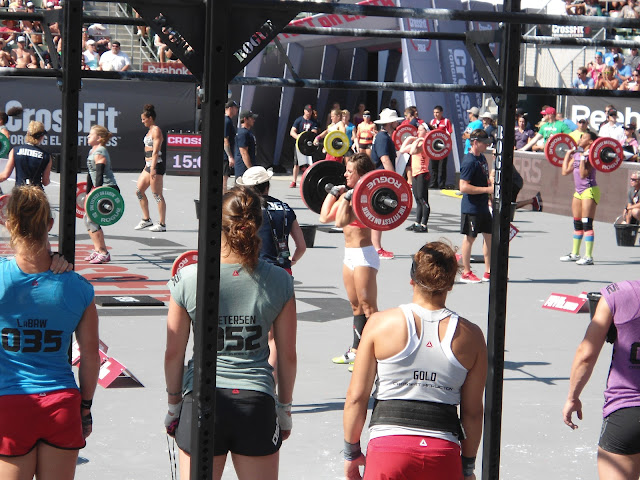 So now that you have a basic idea of how CrossFit works and what it is, I can start recapping my weekend here at the 2012 CrossFit games. Stay tuned 🙂