As I sit down to write this recap of a race I didn’t actually run, it occurs to me that since we’ve moved to Myrtle Beach, I’ve spectated far more races than I’ve run.  A previous version of me would have hated this, having succumbed to the version of FOMO that is literally right in my face, taunting me.   But the current version of me is able to reflect on all of the amazing running and racing opportunities I’ve been given in the past…as well as many unbelievable adventures I have waiting in store for me in the near future.   I don’t have to “run all of the races”, and what’s more, I can thoroughly enjoy spectating…especially when it’s my most favorite people in the whole wide world that I’m watching race. 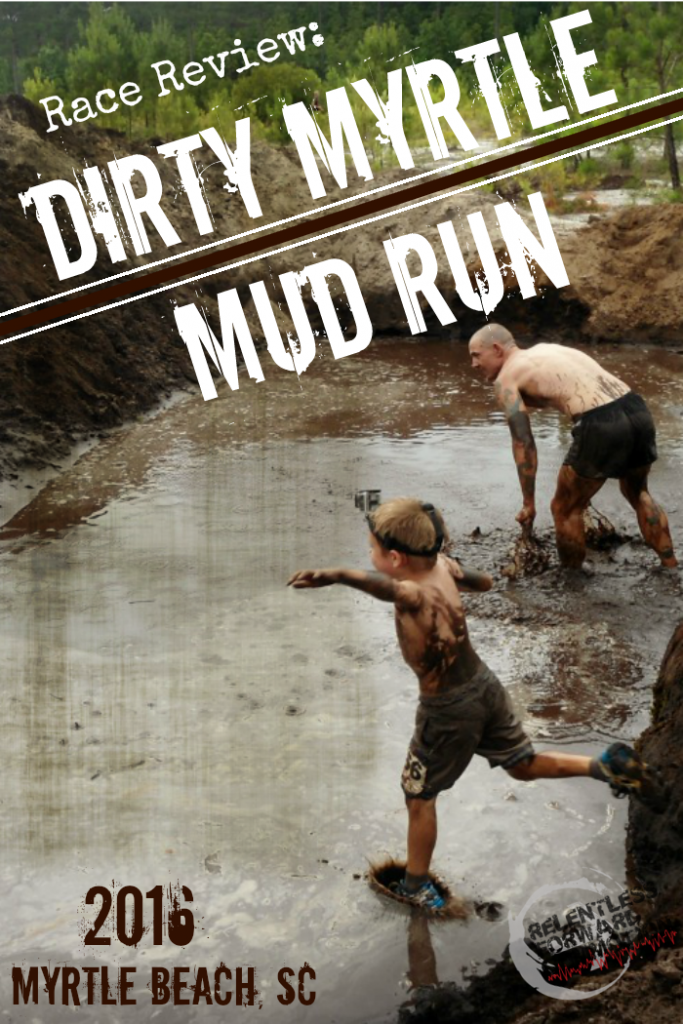 If I had to argue the semantics of the difference between a “mud run” and an “obstacle course race”, the “Dirty Myrtle” would be a prime example of the former.   Held in a huge empty undeveloped lot behind the Waterbridge subdivision here in Myrtle Beach, the “Dirty Myrtle Mud Run“ has been bringing a muddy fun time to athletes and families alike for the last 6 years.  Apparently, every race is potentially the “last” one, as there is always the possibility that construction of new homes will begin on the lot.  But so far, that hasn’t happened (thank you, decline in local real estate market!) and so on Saturday, all three of my boys and I hit the road for the short drive over.

Believe it or not, my kids haven’t run a mud run nor an obstacle course race yet.  I know, kind of shocking, considering there was a point in my life where OCR was seemingly all we did.  As you may or may not have read on this blog before, I started as a crazy fanatic runner mom, pushing my screaming toddlers into tot-trots.  But eventually I realized they hated it, and gave up pushing them into the sport.  Now, at ages 7 & 9, they’ve come around on their own to enjoy running and have begun asking us to take them to races. 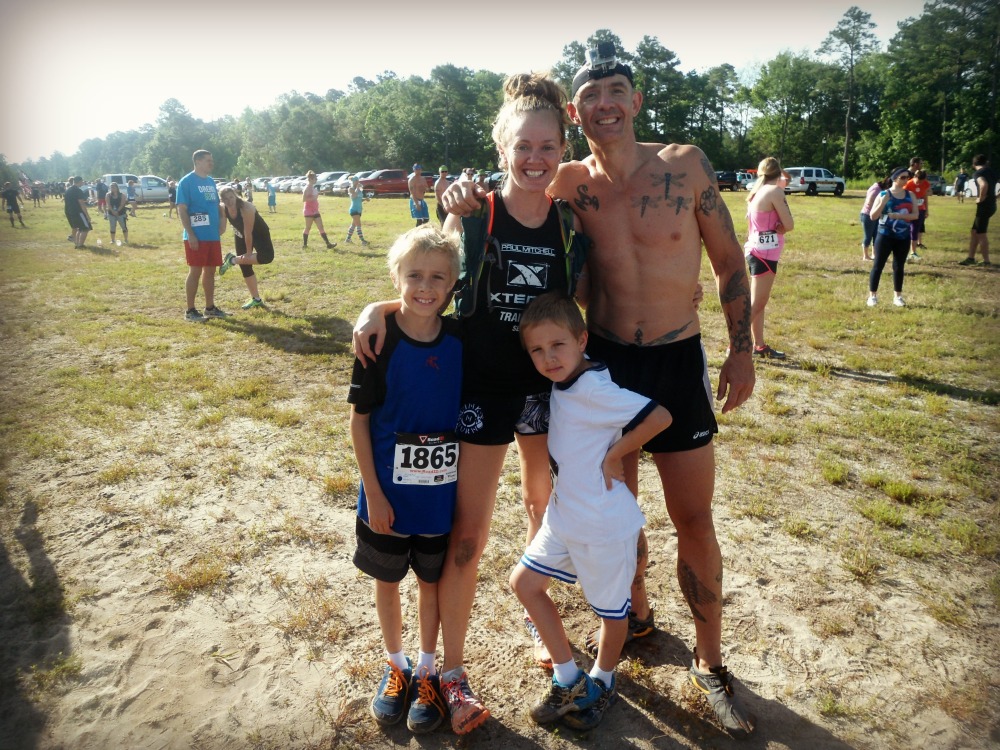 This of course makes my heart beam with pride…and my bank account cry, as a local 5K now costs our family $100+, haha.   First World problems indeed, one that I’m more than happy to have.

We arrived at Waterbridge and were incredibly thankful for all of the signs leading to the actual race, as we would have gotten hopelessly lost in that neighborhood.  Parking was a breeze, with a huge open field available for cars to park.  We lucked out with a spot just a stones throw from the starting line, which would prove to be awesome for snack breaks and changing clothes later in the day.

Geoff picked up his bib and t-shirt, and I was able to register both of the boys on-site.  The one mile kids run was $25 each on-site, but included a t shirt, a coupon for a local trampoline gym, a Dick’s Sporting Goods bracelet, a medal at the finish, a ton of snacks, and of course, the race (that’s what we were all here for in the first place.) 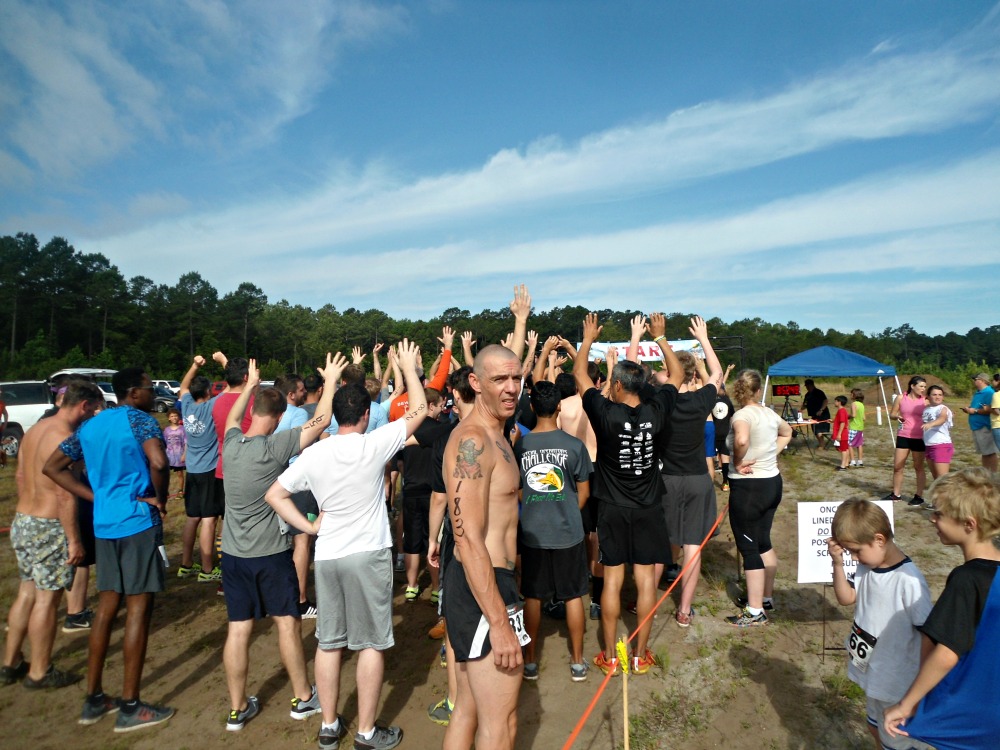 Probably scoffing at the Taylor Swift song playing at the starting line. Poor guy has a hard time fitting in.

Geoff ran with the men’s heat at 9:00 am, while the boys and I watched and waited.  In retrospect, we could have walked out on the course and seen a very large portion of it, this race was indeed spectator friendly.  But instead we stood at the finish line and waited for him to arrive.

This is where you’ll have to wait for Geoff’s possible race review (sometimes he writes them, sometimes he doesn’t).   Was it a good course?  I have no idea.  But he crossed the finish line smiling, and hasn’t stopped talking about wanting to run more OCR’s since, so I’ll take that as a positive review.  And, he came in 2nd in his age group and 17th overall out of 236, so we’re pretty darn proud of him for showing up for what was just a “fun run” in his mind. 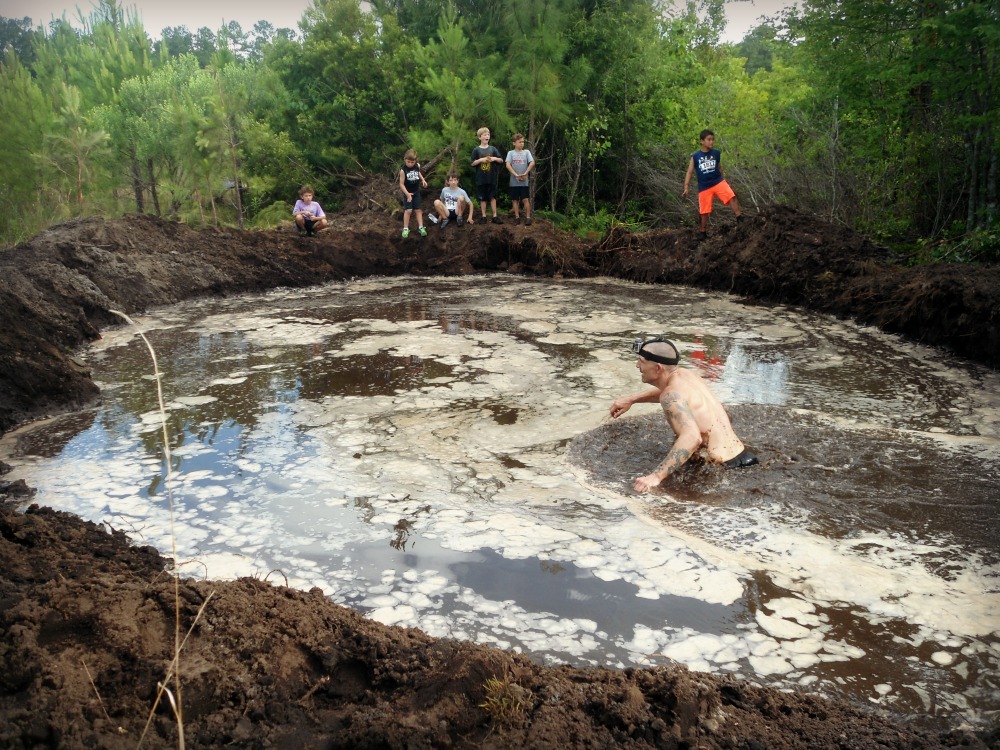 He cleaned up, ate some food, drank a free post race beer (which were seemingly unlimited, that was definitely a first) and we waited patiently for the start of the kids race.   Once it was go-time, waves of 10 (mostly kids, some parents) were sent off every 45 seconds.  The plan for our little team was to have Geoff run with the boys, and I would run along the side taking a billion photographs, as only a proud mother could.

My three boys took off.  Almost immediately we took a wrong turn, as a confused volunteer sent us the wrong way.  I questioned the directions from the next volunteer who confirmed we took a wrong turn.  Geoff and I made the kids backtrack.  They seemed pretty bummed at first (the competitive inner drive has been passed on to my kids, clearly), but would forget that as soon as they saw all of the cool obstacles we missed.  Namely, mud, mud, and more mud. 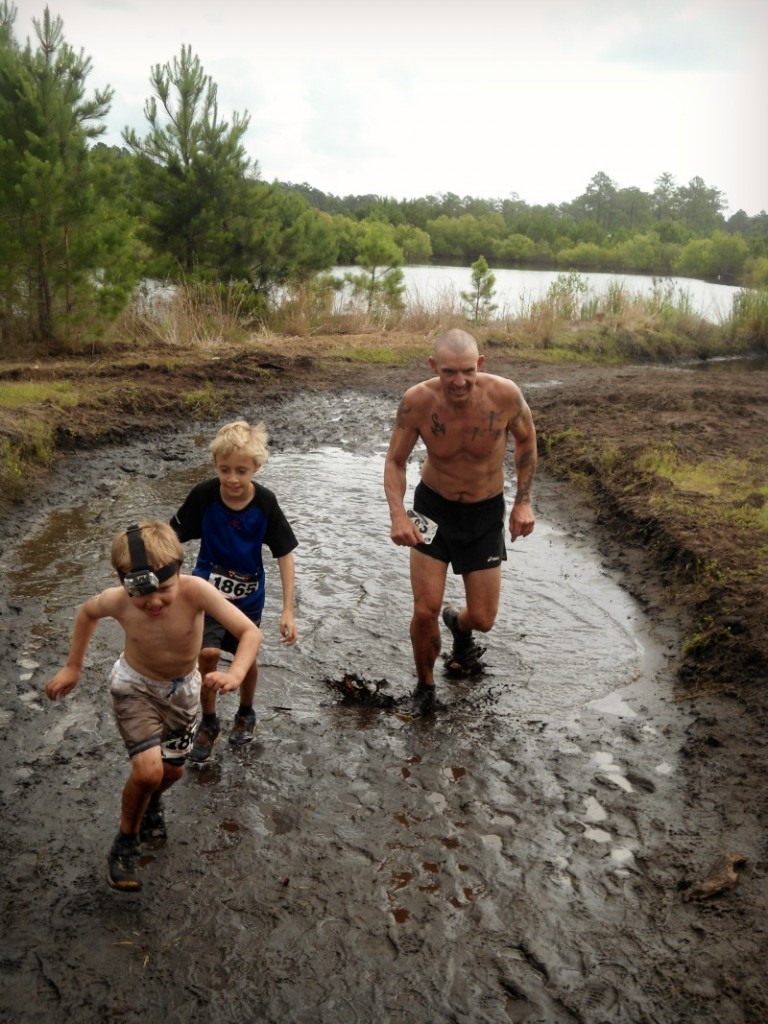 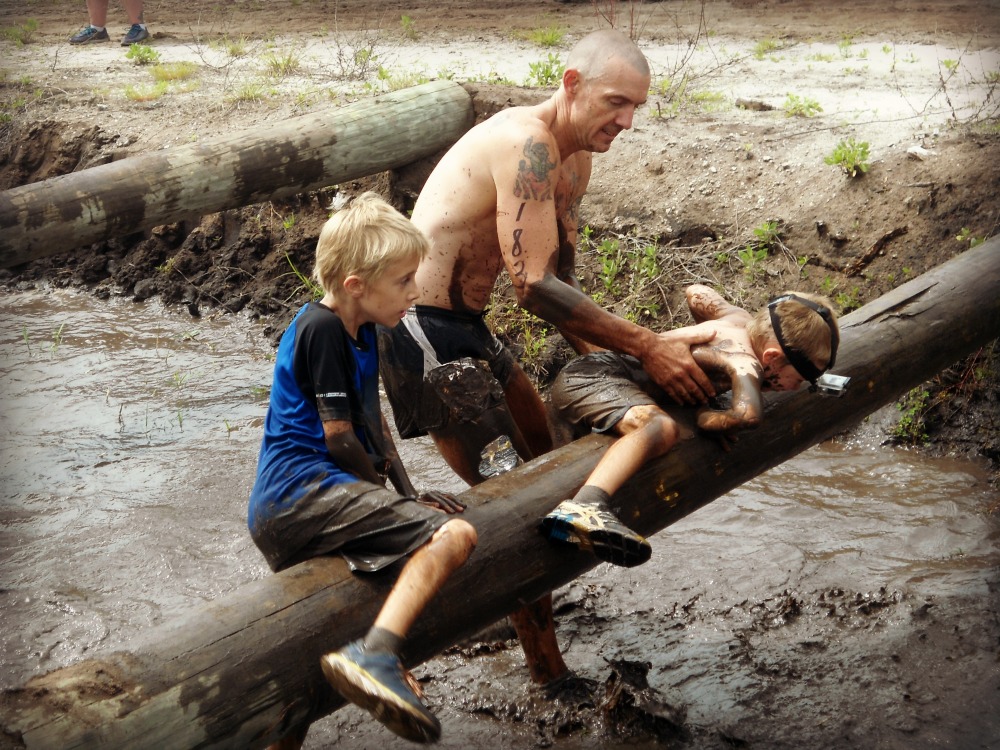 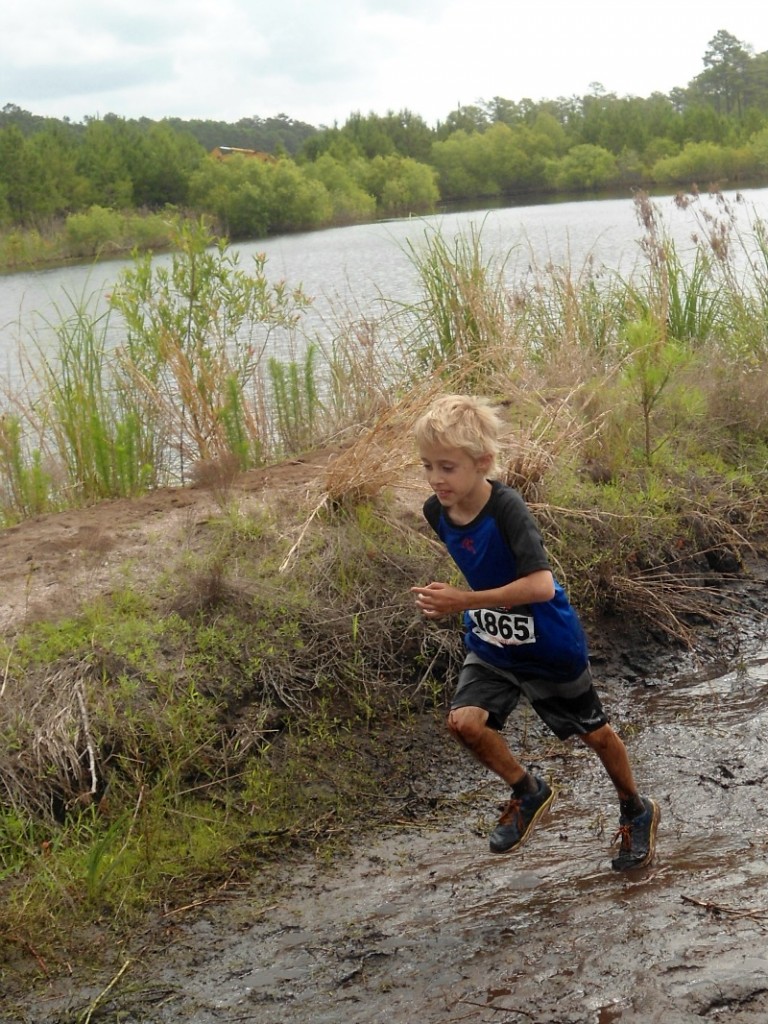 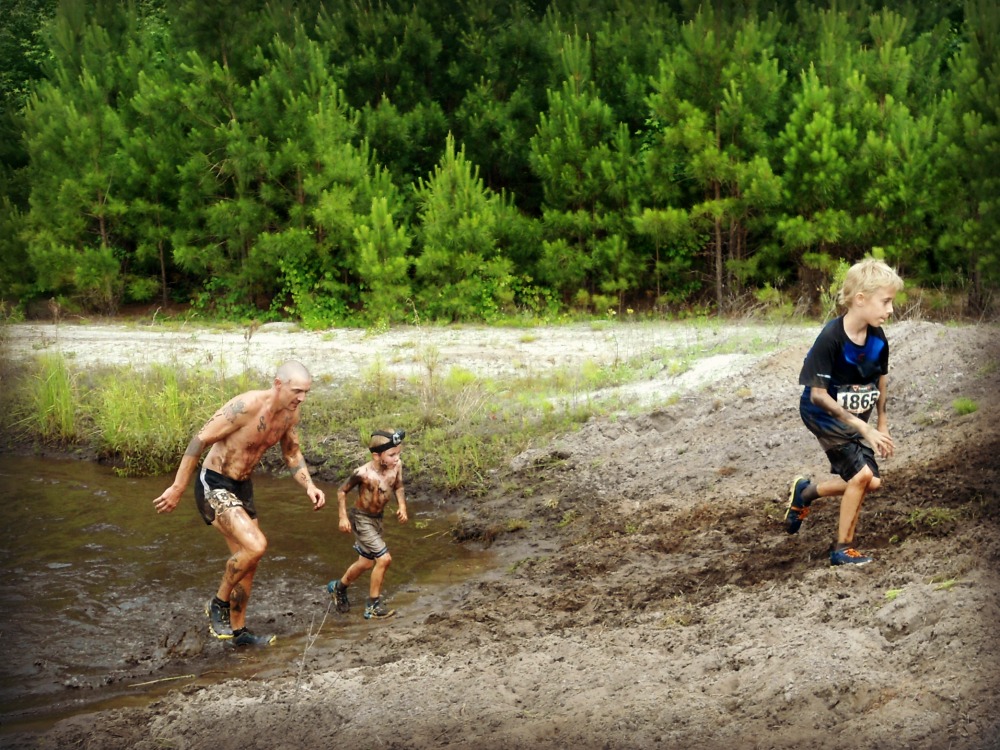 There was a low crawl under rope, long pits of cement-like mud (which Geoff confirmed had gotten much thicker and more difficult to navigate since his 9:00 am wave), over/unders, hanging tires, and more.   I braced myself from the start for two little kids saying things like “this is disgusting”, “I got mud in my face”, “I don’t want to do this anymore”, etc.  But instead all I got was a 7 year old screaming “I WAS BORN FOR THIS!”, apparently channeling his inner Joan of Arc, and a TON of giggling out of both of them. 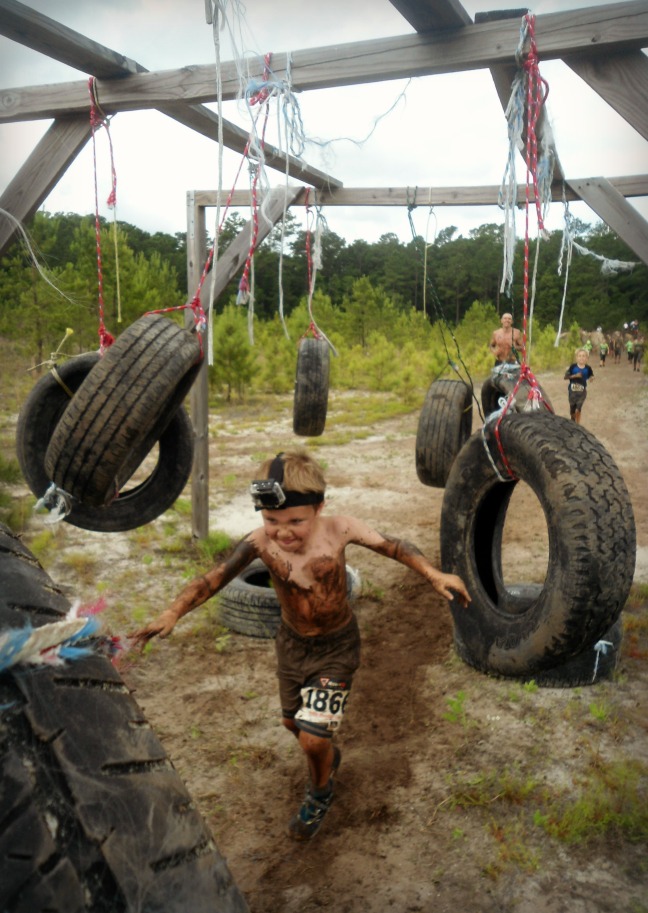 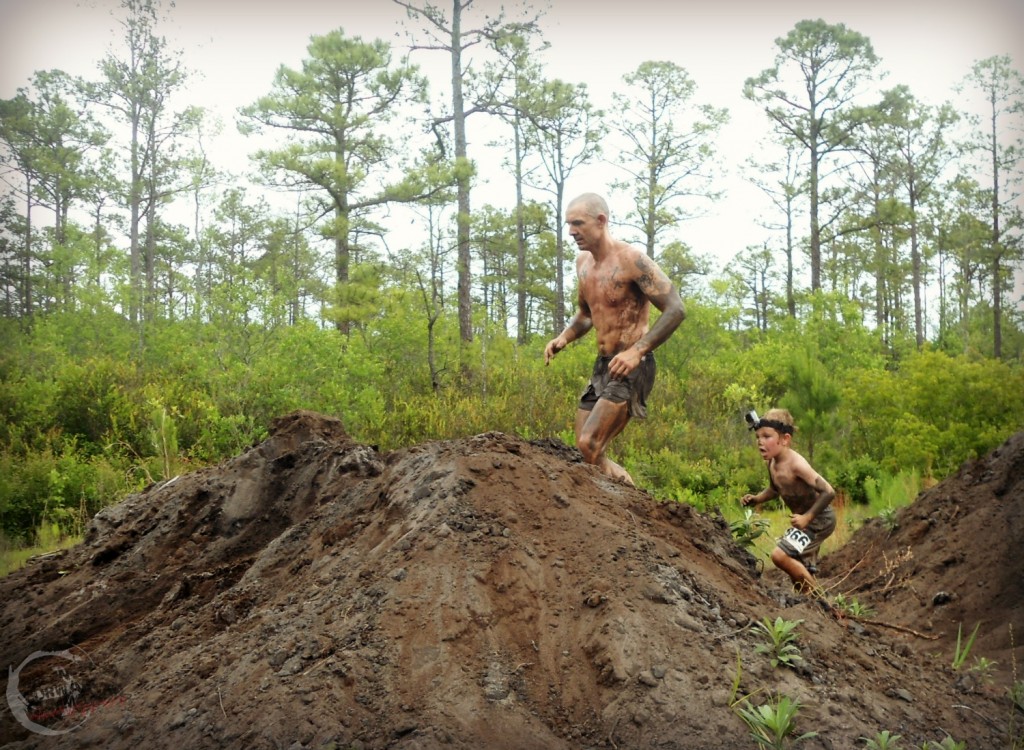 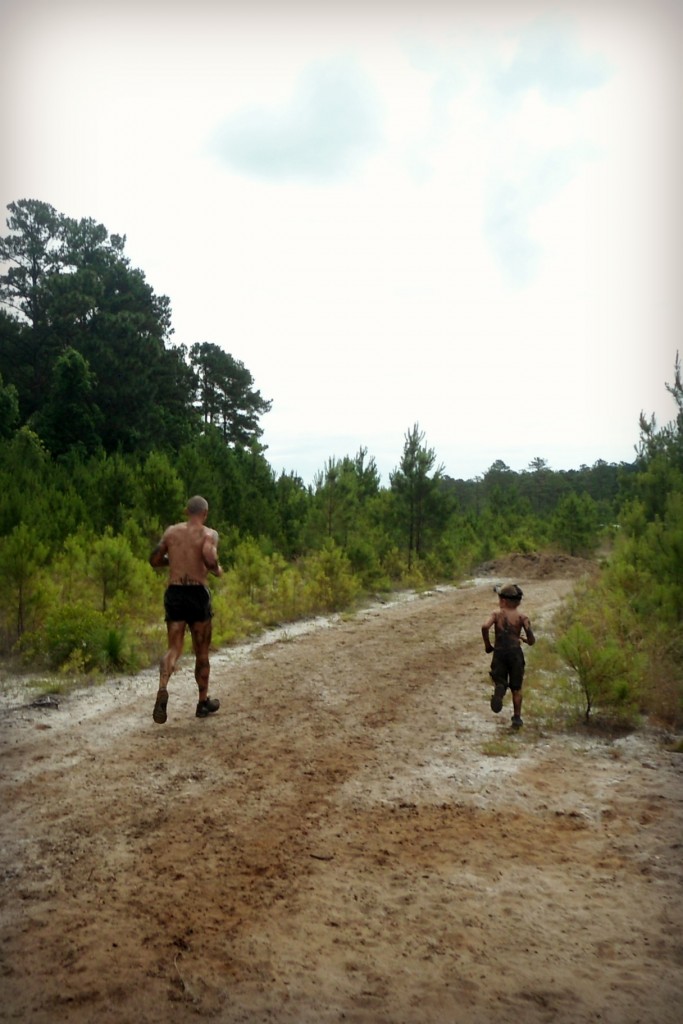 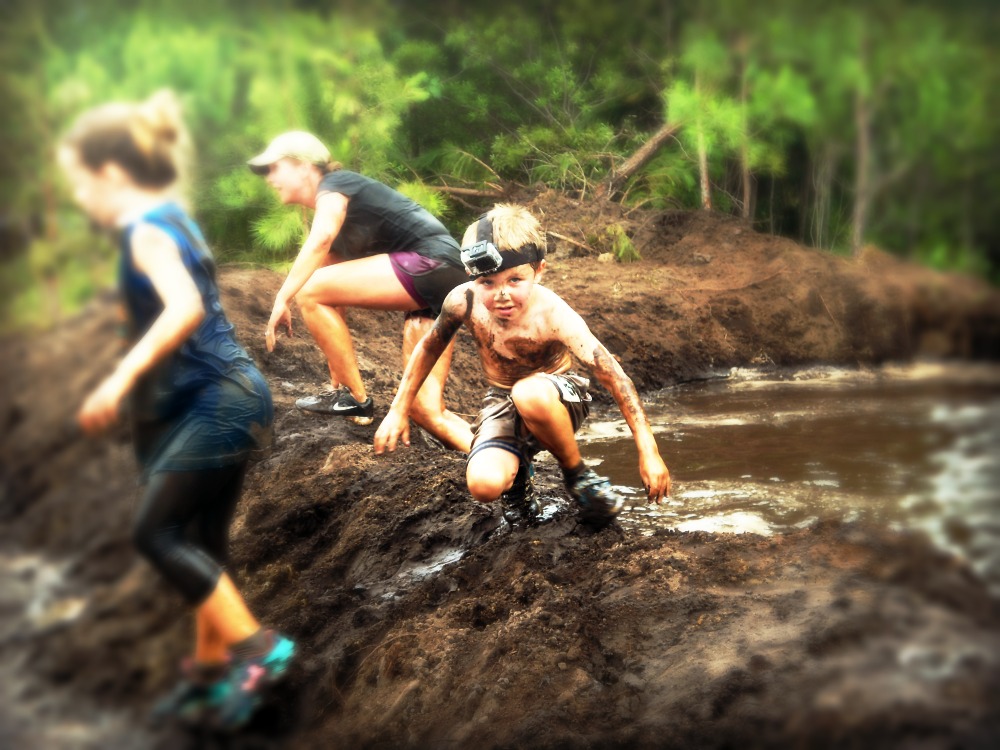 Their fearlessness as they charged up and over the massive mounds of dirt and through deep puddles of mud filled my mommy heart with pride.   I always joke that the thing I love the most about OCR/mud runs is the fact that you feel like a little kid splashing in the mud, without your mom around to yell at you to get out of the mud puddle.   So being on the other side of the scenario: the mom who doesn’t have to yell at their kid to get out of the mud puddle (and instead encourage them to make an even bigger splash) was pretty fun. 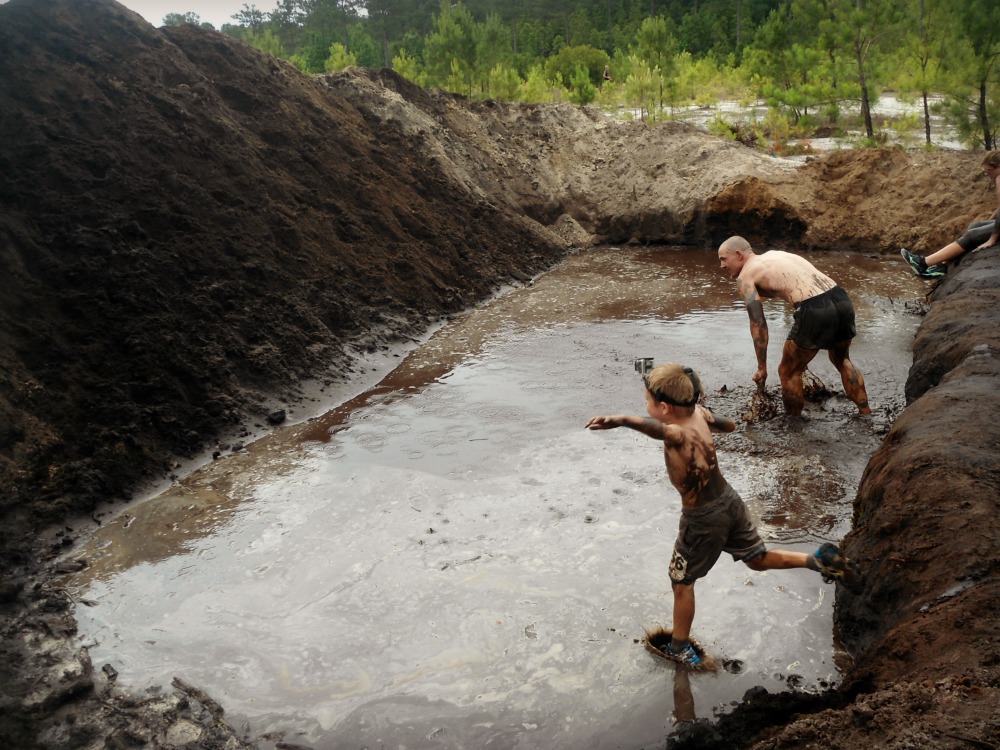 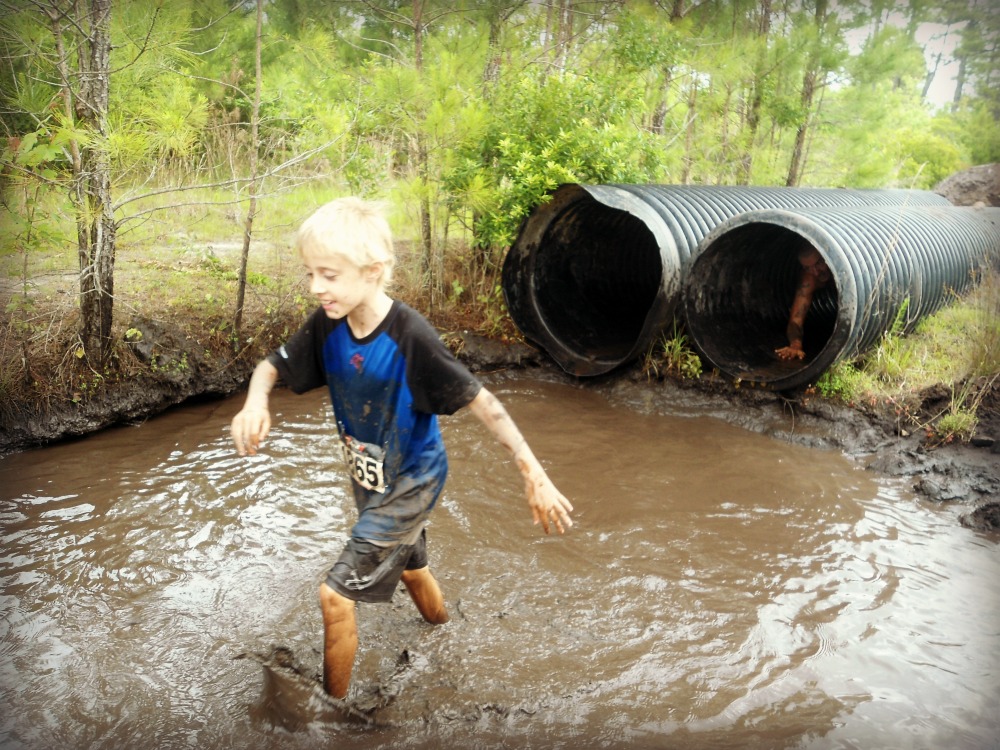 The finish line appeared a brief one mile later.  But it wasn’t an easy finish: a long crawl through thick mud that basically swallowed your foot with each step. 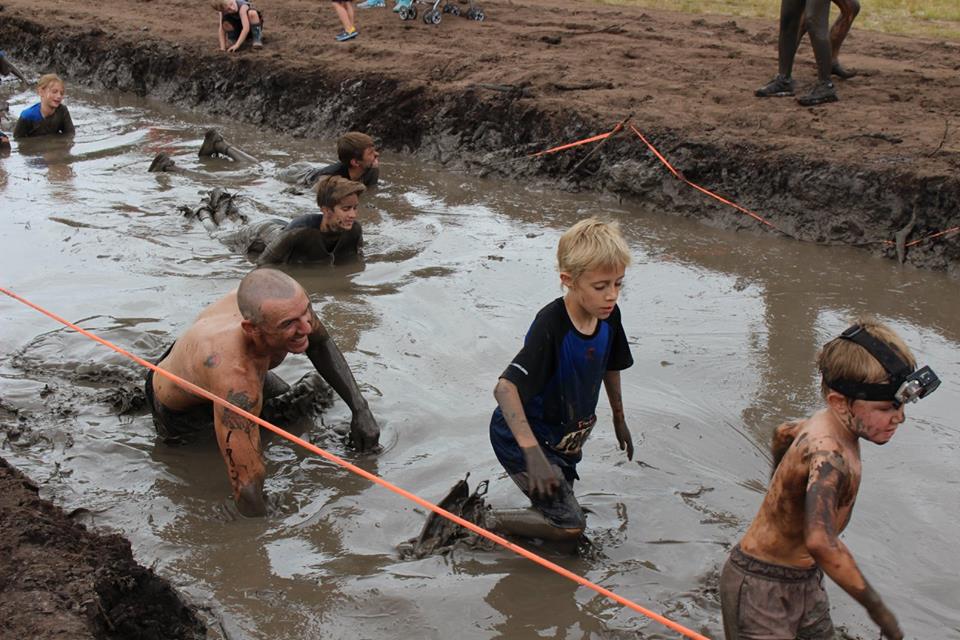 The finish line.  A medal. (Kain, 7,  screamed at the top of his lungs “MY FIRST MEDAL, I’M SO FREAKING EXCITED!!!”)  A dip in a pond as a substitute for the cold showers.  And a ton of kid friendly snacks. 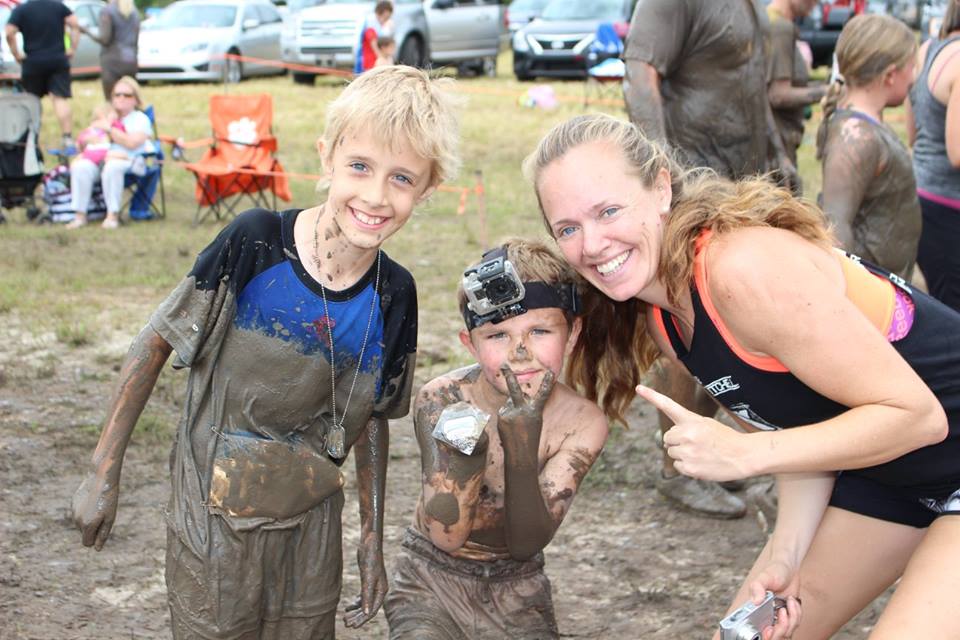 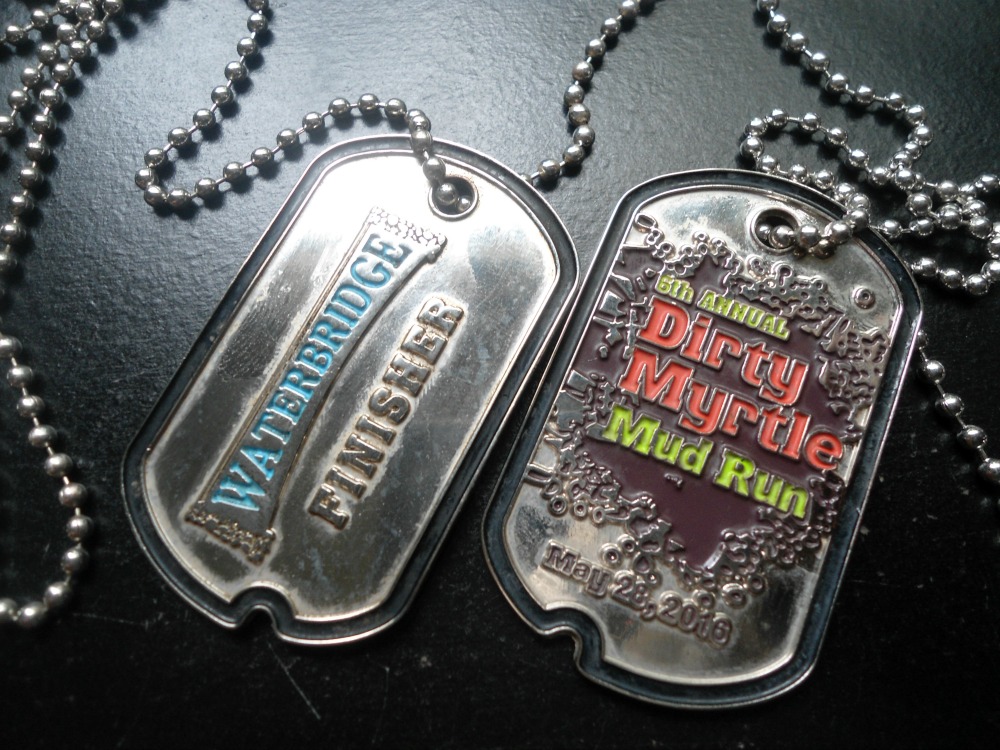 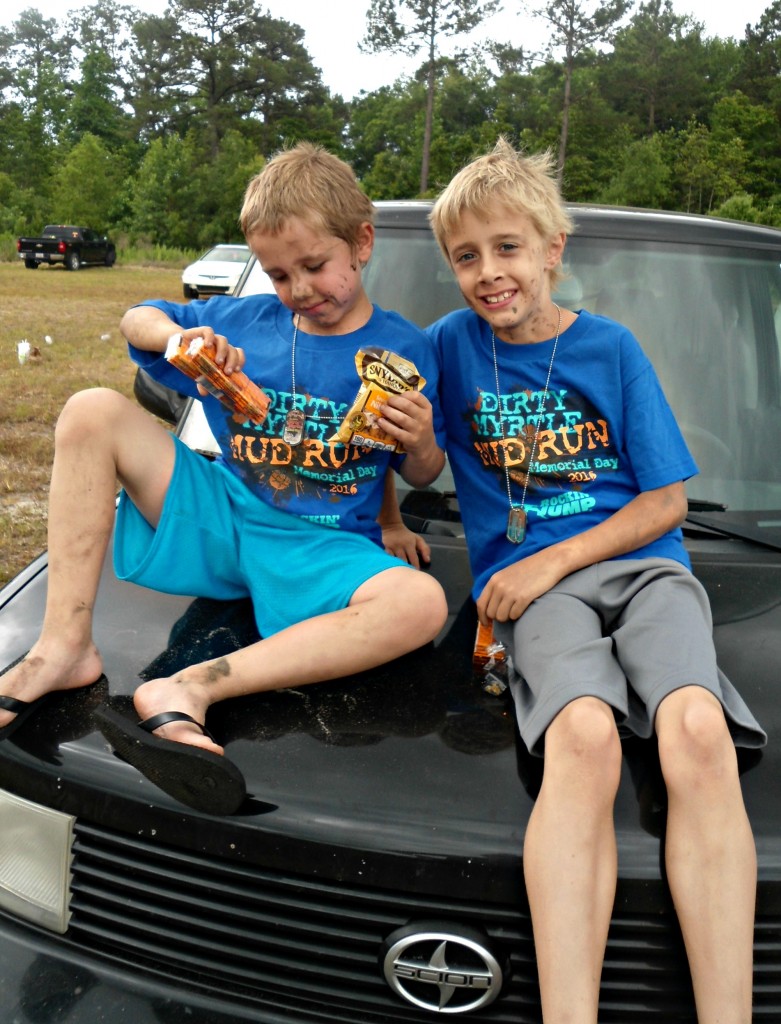 I’ve reviewed countless races on this blog over the last 7 years.  I’ve analyzed courses, obstacles, safety, difficulty, race directors, race organization, swag and bling (I really dislike both of those terms, I’m not sure why I continue to use them).  I’ve given my honest opinion as to whether or not the race was worth the cost of the entry fee, the travel, etc.

But this review, well I’ve got to be honest: it was completely swayed by the smiles on my kids faces.  You could have charged us twice as much for half the distance, because having my kids say to me more times than I can count “thank you so much mommy, that was the most fun thing we’ve ever done…can we do another one?”